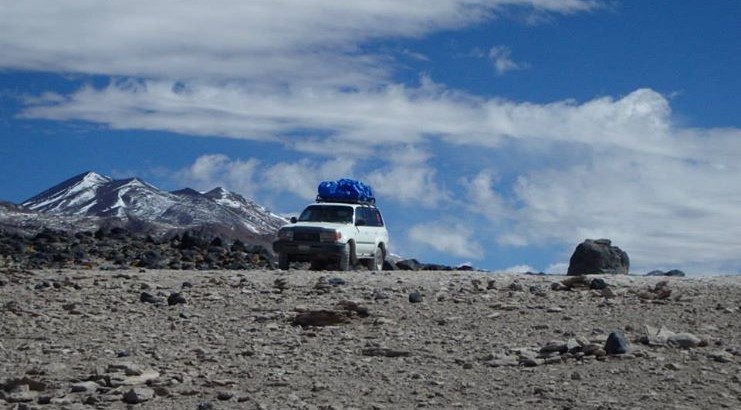 When heading into Bolivia from Chile, many people choose to start the journey from San Pedro de Atacama and head to Uyuni. This is a fairly well-trodden path as the route has become so popular with travellers heading North (and also those doing the trip the other way around).

Skip to the review of Cordillera Traveler.

The journey takes 3 days in total, and it’s by no means an easy three days.  You are transported in groups of 3-6 people in the back of a 4×4 (usually a Toyota Landcruiser), across deserts and mountains at high altitude. Not for the faint hearted.

The journey does, however, offer the opportunity to see some of Bolivia’s – and even Latin America’s – most impressive landscapes, not to mention the Uyuni salt flats.

We were picked up from our hostel at 07:30… only 30 minutes late, not bad for Latin American time.  The minibus drove round for a further 20 minutes picking up travellers from various hotels.

At this point, there were no English speakers in the minibus, including the driver. The four others in the bus were actually Portuguese, so we couldn’t even realy on our, albeit modest, spanish.

We were a little worried that we were about to spend the next 3 days with no way of communicating with anyone else on the tour.

We reached the Bolivian border for our first taste of Bolivian life: 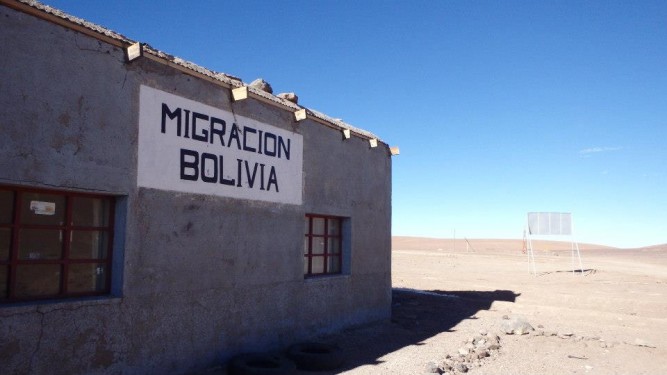 The border official didn’t even look at our passport photo, he just gave us our entry stamp and we were into our jeeps and on our way.

The first sightseeing stops in Bolivia were Laguna Blanco and Laguna Verde (white and green lagoon, respectively), some pretty spectactular high altittude lakes, both of which were full of Flamingos: 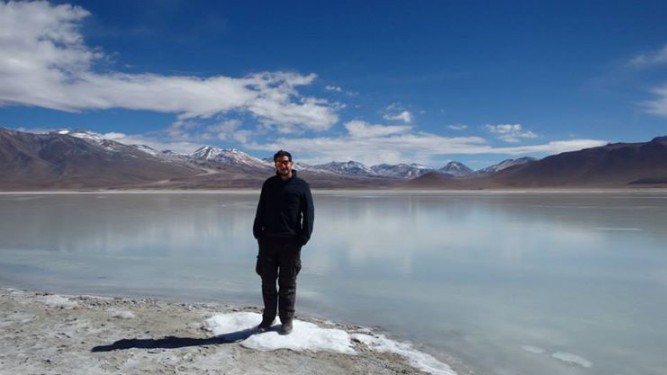 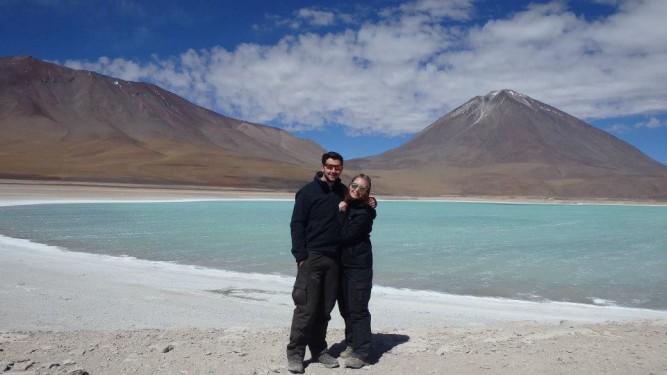 Despite the wind, which combined with the altitude (14,500 feet) makes for a chilly encounter, the views of the lakes and the nearby Licancabur volcano make for a breathtaking first stop on the tour.

Luckily, we were able to warm ourselves up at the next stop which happened to be a magma-heated natural hot spring. After a couple of nights in dusty San Pedro that is exactly what we needed! 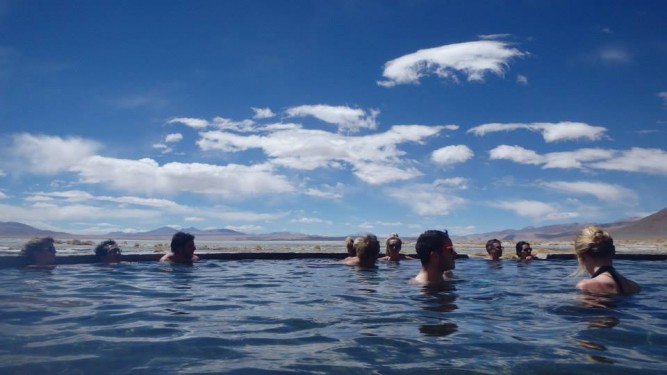 Once we were all dried off we paid a couple of Bolivianos (GBP0.09) to use the nearby public toilet. We immediately wished we hadn’t.

Nevermind, onwards to the next hotsprings!

Although this time the hotsprings were not the kind one should like to bathe in. Bubbling, scalding, sulphur-emitting mud pits. The Sol de Mañana geysers in the Daly Desert.

One of the guys in our group was unlucky enough to have a splatter of the mud land on his trousers in an event which became affectionately known as “that time Alex got shat on by a geyser”. Still amazing to see, despite the smell. 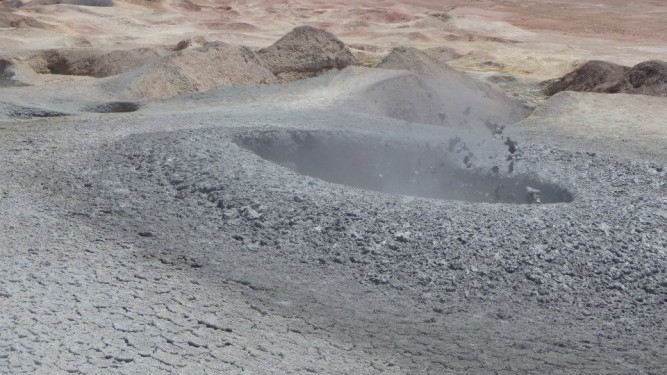 After the mud pits we got our first glimpse of the refugio (shelter) for the first night. This was extremely basic; no electricity, no hot water and very, very cold. We had just stopped by to drop off our bags and have lunch. The food was surprisingly good!

Sausage and mash in the desert is an experience I won’t soon forget.

Once re-fuelled – us and the jeep – we made the short drive the Laguna Colorado. This is perhaps the most spectacular of the lagunas as a naturally occuring algae gives the laguna a pinkish red apppearance: 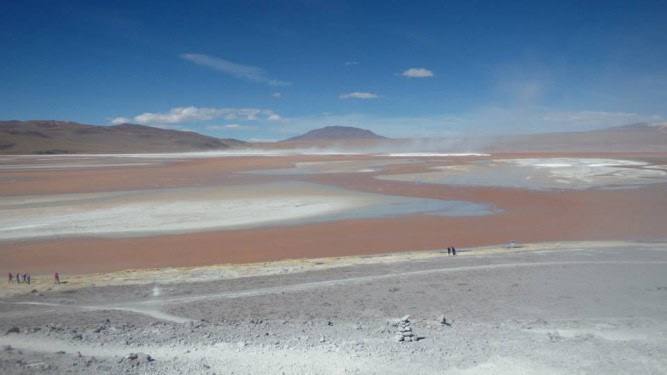 Back to the shelter for comfortable, yet very cold, first night.

On the second day, after a decent breakfast in the refugio, we set off see some stunning rock formations in the Siloli Desert.  The surreal landscapes were caused by wind erosion and were – as our driver excitedly told us – remeniscent of a Salvador Dalhi painting. 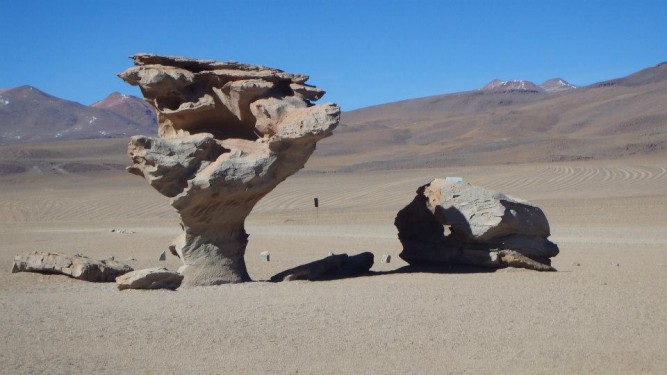 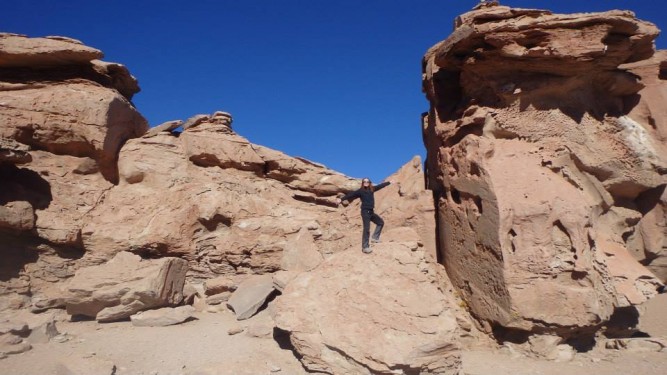 After using the rocks as a climbing frame for an hour, we continued to drive on to the lagunas altiplanicas, high plain lagoons. We visited the coloured lagoons Laguna Honda, Chiarcota and Cañapa, each with thousands of flamingos which were apparently unphased by our cameras. 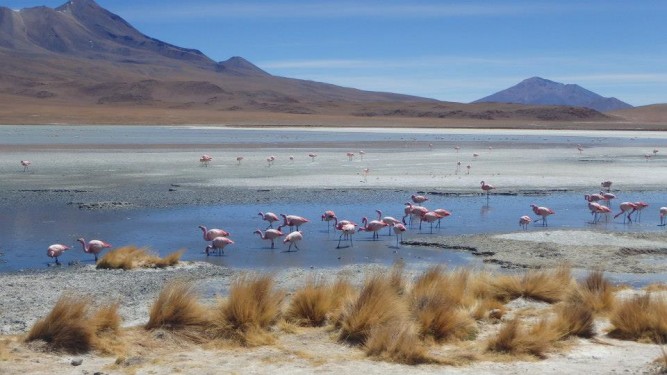 After a long day (over 200km on roads which are little more than tyre tracks in the desert) we made our way to San Juan, where we found our hotel. This particular hotel was a hotel del sal, a hotel made entirely of salt. We were lucky enough to have a private room with a double bed… luxury after several hours in a jeep. Once again the food was very good considering where we were – desert steak and chips…and a bottle of red wine! 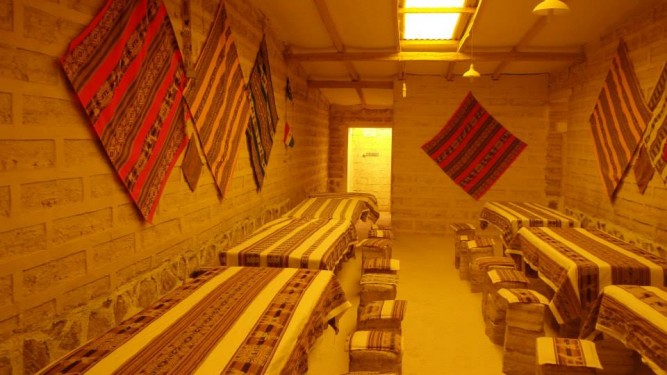 Day 3 is the big one. The Uyuni Salt Flats. This is the landscape that people make the journey for and it didn’t disapoint. Although in the dry season you don’t get the incredible reflections of the sky, the sheer vastness of the place makes it impressive enough.

The visit started with sunrise on Huasi Inca Island (Fish Island). This rock formation sits above the flats at 39,400 feet and offers staggering views of the landscape as well as cactii, fossilised coral and seashell traces.

The simplest of actions is made much more difficult at high altitude, so a 3 day journey through the desert certainly takes it’s toll on the body and mind. We arrived in Uyuni (which is a surprisingly charming little town) mid-afternoon on the third day tired, very dirty but richer for the experience.

If you ever have the chance to take the tour, don’t hesitate for a second.

Although the tour was a little more expensive than with some other operators and the guide didn't speak English (they often don't), I couldn't fault the overall experience. The driving was safe and the views spectacular. After speaking with groups from other companies, it is apparent that the quality of food & lodging is better with Cordillera. Would recommend, but try to book in a group to negotiate prices.