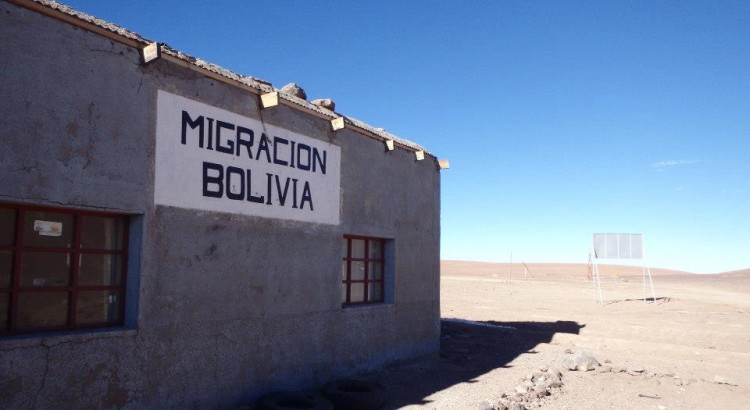 You might have heard rumours (or read about San Pedro Prison) regarding the various law enforcement officials in Bolivia and the scams and corrupt practices they employ to make a few extra Bolivianos.  When leaving Chile from San Pedro de Atacama for the Bolivian border we had no idea that we were about to fall victim to one of these scams ourselves.

In Latin American countries you generally need an immigration certificate which lists details of your trip and your date of entry. Combined with your passport stamp, this tells you how long you’re legally allowed to stay in the country.  If one has never been to Bolivia before, and no immigration certificate is handed over, it’s easy to think nothing of it, especially as a European being used to moving around Europe without stamps or immigration cards.

We weren’t given an immigration certificate and didn’t think anything of it.  We also didn’t notice the hand-written ‘ST’ over the top of our Bolivia stamp. Border officials often write numbers or codes on top of the stamp relating to the length of a visa. 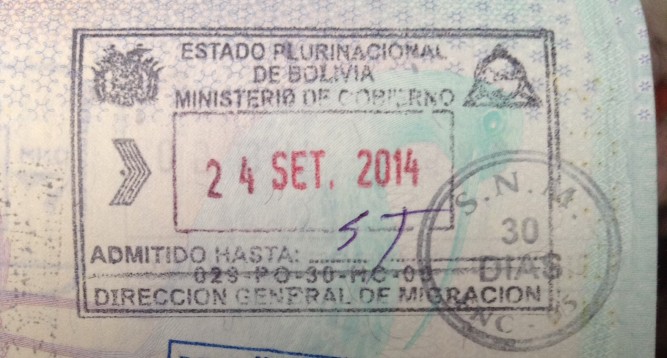 On our way out of Bolivia, an extremely stern looking Bolivian policeman was walking alongside the queue checking passports. When he reached Sarah and I he asked for our tarjeta, card, we exchanged confused looks. He shook his finger, said “problem” in a thick Bolivian-Spanish accent and pocketed our Passports. It turns out that the ST stands for sin tarjeta, without card.

We were escorted into a small room and into a scene from a 90s drug-running movie.

The policeman, and I use the term loosely, this piece-of-shit-policeman is explaining how we would each be required to pay a 50 Boliviano (only about 4.95 GBP) fine as we didn’t have an immigration certificate.  We tried to argue that we weren’t given certificates, that UK residents don’t require visas etcetera but he wouldn’t budge. At which point I decided that the more we argued, the longer this was going to take and the more trouble we would be in. Delaying the inevitable.

Sarah being (stubborn) Sarah, decided we should keep arguing, despite my best efforts. At this point, a small, sweaty man we hadn’t previously noticed appeared from the corner of the room with a heavy leather-bound book of immigration laws. He showed us a highlighted section stating that anyone evading immigration would be required to pay a 300 Boliviano fine. A couple of things came to mind (and out of our mouths):

We knew from he start that this guy was just after making a few quid, but now we were both pretty determined not to be taken for a ride, but he was insistent.

As we started to fill out two new immigration cards (which would soon cost us 100 B$), I decided it would be sensible to ask for a receipt. He didn’t seem to like this.

Within a few seconds he had taken the cards off us, handed our passports back and not-so-politely told us to be on our way. He wouldn’t even let us get back in line to collect our exit stamps. This basically means that we’re never allowed back into Bolivia, without paying a hefty fine.

Trying to get into Peru

As a middle finger for not paying his bribe, the Bolivian policeman hadn’t let us get our exit stamps, knowing only too well that this would cause problems for us on the way into Peru.

The Peruvian border officials told us they would not be able to grant us entry into Peru as, without a Bolivian exit stamp, it appears as though we have outstayed our Visa in Bolivia.

Luckily for me, working the night shift had taken it’s toll on the official who checked my passport. He stamped it without checking for an exit stamp, then pressured the other official to stamp Sarah’s, presumably so he wouldn’t get sacked on his own!

Quite an ordeal to go through at 2am, but at least we were on our way with the satisfaction that we didn’t give the corrupt policeman our beer money. After speaking with some friends who crossed the border at the same time as us – and didn’t get a card either – it turns out that they ended up paying the fine. One of them speaks Spanish and told the guard it was a scam, to which he replied “yes, but it’s a scam at the other end”.

That’s Boliva for you.

7 thoughts on “Bribery at the Bolivan Border”