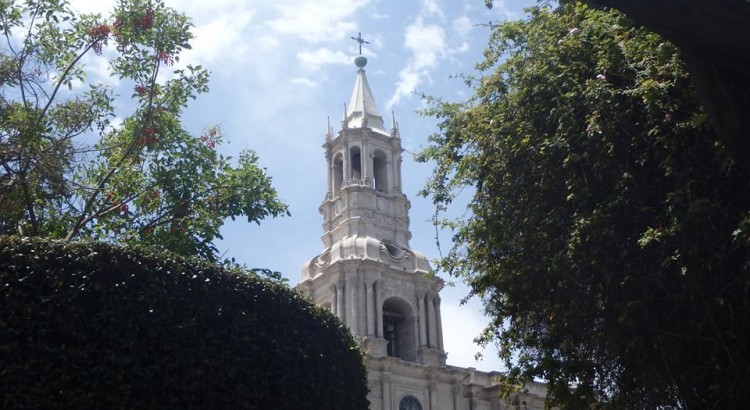 Arequipa is the second largest city in Peru with a population of 1 million. The main attraction to Arequipa is its proximity to the Colca Canyon, but the city also has much to offer in itself.

It is known as ‘The White City’ but not because of the beautiful white buildings but because it was heavily dominated by the Spanish (white people). It was declared capital for one year when Lima was taken over by Chile, but they soon took that back.

Arequipa was a lovely surprise of a city. The city is very beautiful with cobbled streets and the main square is surrounded by white arches and a cathedral. 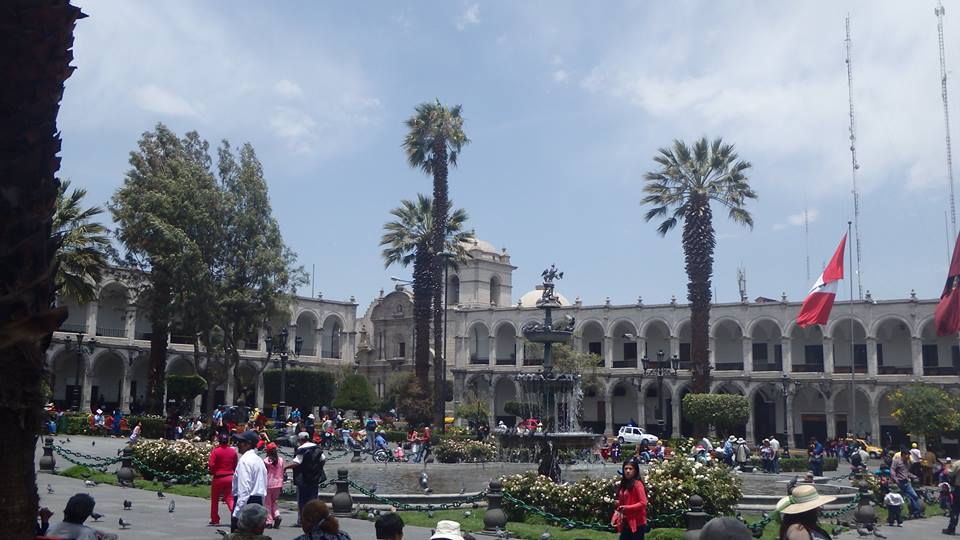 It is one of the more Westernised cities that we have been to. Notably so by the Starbucks, Burger King etc. that exist. This didn’t put us off the city though as it was a nice mix of modernisation with historical charm. 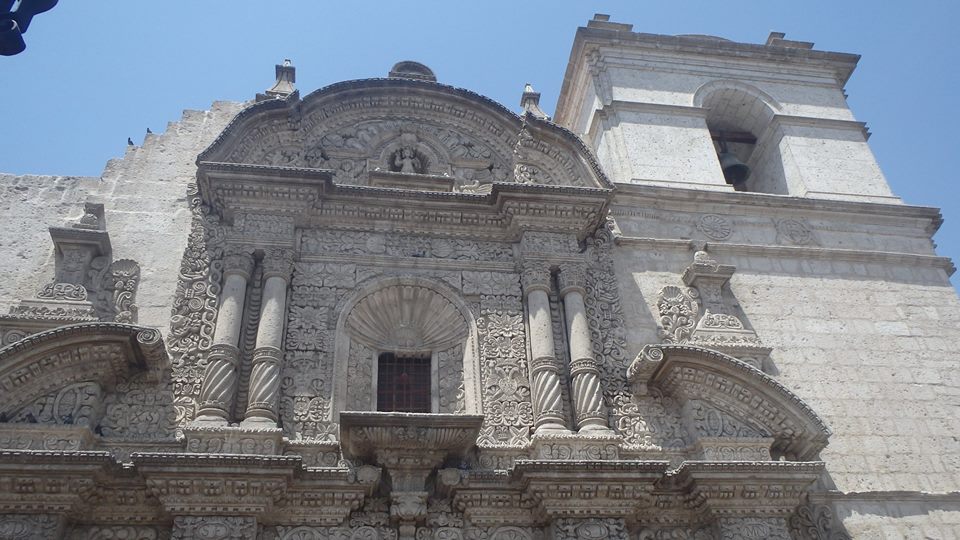 The church’s engravings represent the core principles of the Inca religion; the puma, the condor and the snake.

Inside the church you can find classic portraits and paintings of Jesus…but with guinea pigs! This is to represent Catholicism but with the local culture incorporated into it. 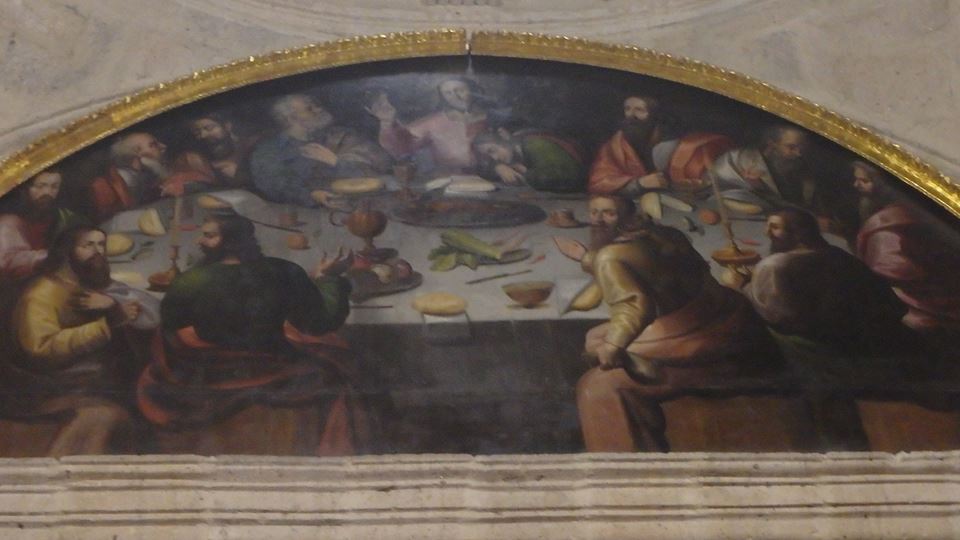 In the courtyard next to the church you can find columns with beautiful carvings. There are many theories as to what the designs mean. Some say it demonstrates life with the carvings at the bottom being a woman’s womb growing into the cherub/baby at the top. Others believe it shows the core aspects of inca belief; coco beans, the national flower, corn etc. 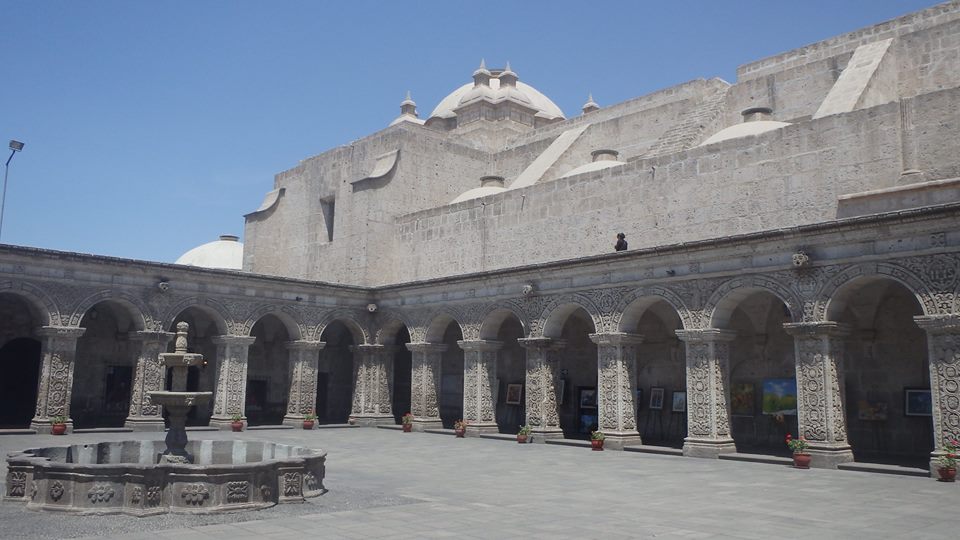 Arequipa is home to a delicious artisanal treat, queso helado (cheese ice cream). It doesn’t actually contain cheese but it is made in the same silver tub. Instead it is made out of milk, sugar, egg, coconut and cinnamon. You can find a good recipe here. 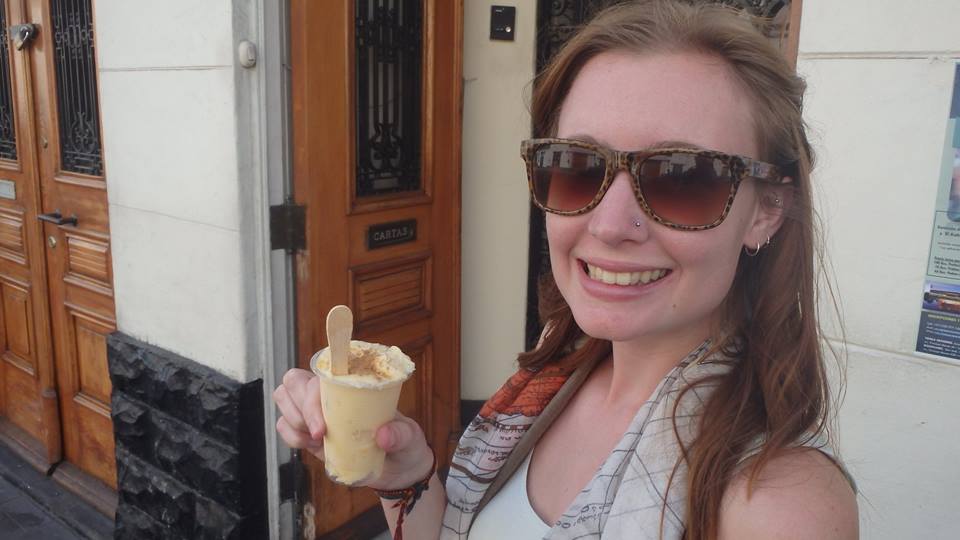 Another quirky fact about Arequipa is to do with their zebra crossings. As with the majority of Latin America, just because there is a zebra crossing or a green man it doesn’t mean traffic will stop, but what is funny is that the green man actually goes to a jog and then a sprint as the timer ticks down!

3 volcanoes loom over Arequipa; Misti, Chachani and PichuPichu. Misti is only 17km from the town and is active. Although the volcano is constantly being monitored, if it erupts the town will only have 20 seconds to escape! Terrifying. Having said this, the inhabitants are far more concerned about earthquakes than they are the volcano. I guess because this is a lot more likely.

Currently Arequipa is used as a stopping point for those visiting the Colca Canyon, but the city is trying to change this to encourage more people to see Arequipa as a destination. There is definitely a lot to do in the city and we would recommend it as a stop off point if you are travelling between Cusco and Lima.