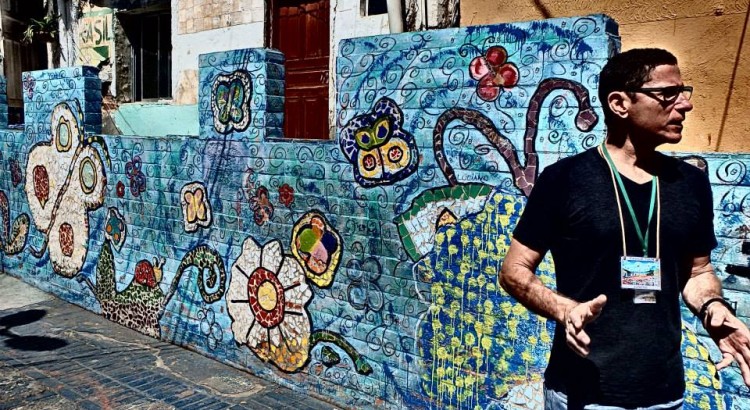 On our penultimate day in Rio we decided to take a Favela Tour, as the favelas are such a large part of Carioca culture and we wanted to experience as much of it as possible.

We were a little concerned to begin with that the tour was a way of commercialising, or exploiting, the unfortunate conditions in which some of the city’s inhabitants live. We needn’t have been worried though, as our guide Alfredo was a real advocate of social and cultural change in Brazil and was using the tours as a means of educating outsiders on the conditions within the favelas and raising funds for social projects within the favelas themselves.

The term favela is based on the favela plant common in the Canudos hills in the Northeast of Brazil. Freed slaves who fought in battle in the 1890s were promised land in Rio de Jeneiro region, but this land wasn’t delivered. As a result, they built a small community on the surrounding hills where the favela plant also grew. This lead to the name “Morro da Favela” (“favela hill”). Over the years, citizens who couldn’t afford to purchase land in the city built houses in these so-called favelas.

Many of the low-income workers are labourers or construction workers in the nearby city, meaning that they are able to easily construct simple houses in which to live. As they are built on public land the Brazilian law Ação de Usucapião (similar to squatters rights in the UK) states that if the individual lives on the land peacefully for five years, without intervention from the legal owner, then the occupier is entitled to the deed of the land by default. 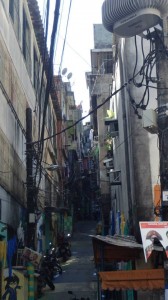 Crime is often idiosyncratic with low-income communities and Brazil’s favelas are no different. Gang culture led to drug distribution, violence and even extortion; at times residents were required to pay a fee to local gangs in order to purchase vital supplies such as water and gas canisters. Residents resorted to illegal hook-ups to overhead power lines to steal electricity directly from suppliers.

Consequently, public utilities providers began to refuse to service in areas where the integrity of their infrastructure or the safety of their workers could not be guaranteed by the state. Steps needed to be taken in order to amalgamate the favelas into Carioca society.

In 2008 a pacification program – created by State Public Security Secretary José Mariano Beltrame and supported by Rio Governer Sérgio Cabral – was implemented in Rocinha. The pacification happened in stages:

As of the beginning of 2024, there were 36 UPPs in place across Rio’s favelas and the general safety of the communities is on the up.

The tour started with a 20 minute bus ride into the hills, while Alfredo talked us through the history of the favelas.

We arrived at the outskirts of Rocinha, Rio’s largest favela. The street was obviously very tourist friendly as there we rows of market stalls at the side of road, selling crafts to those brought in on the tours. Alfredo shook hands with the locals and he knew them all by name – I got the impression that he was trying to ease us into the favelas to settle any nerves.

The second stop was a an inconspicuous garage. Walking to the other side (past a busy mechanic) revealed a view of the favela sprawling across the hillside – it really gives an impression of the scale of the favela issue within Rio’s outskirts: 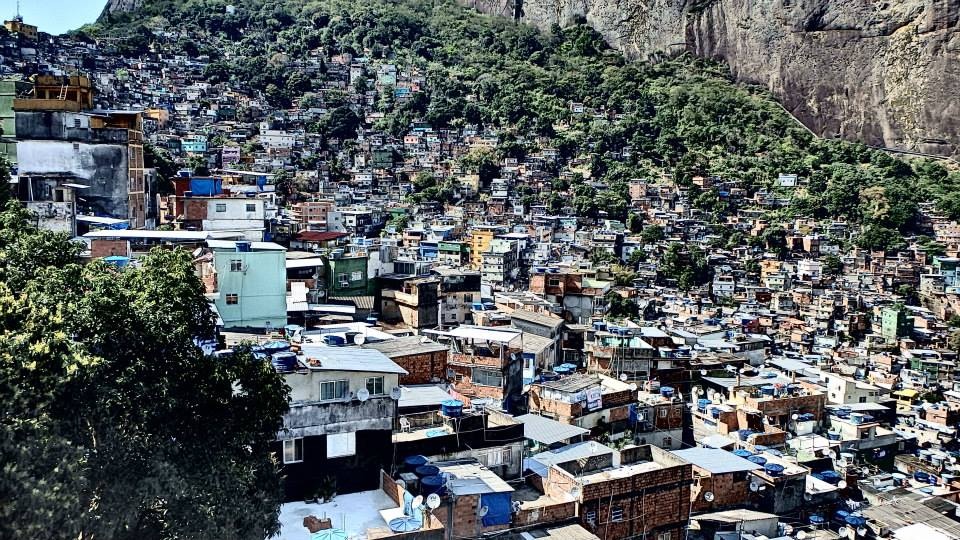 The next location was a busy road with shops on each side. This was, for want of a better word, the favela’s high street. There was a pretty amazing array of things on offer; all sorts of household and sundry items which I would never have expected to see on sale in a place like that. Rocinha really was a community in of itself.

After experiencing a taste of everyday favela life, we visited a centre which was set up by an Italian couple (the former head of the Brazilian arm of FIAT and his wife) to supplement school and keep children from low-income families off the street and away from gang culture.

The centre (called Para Ti, meaning For You) receives no funding from the state. Fortunately, Favella Tours donates 40% of the tour price to Para Ti. 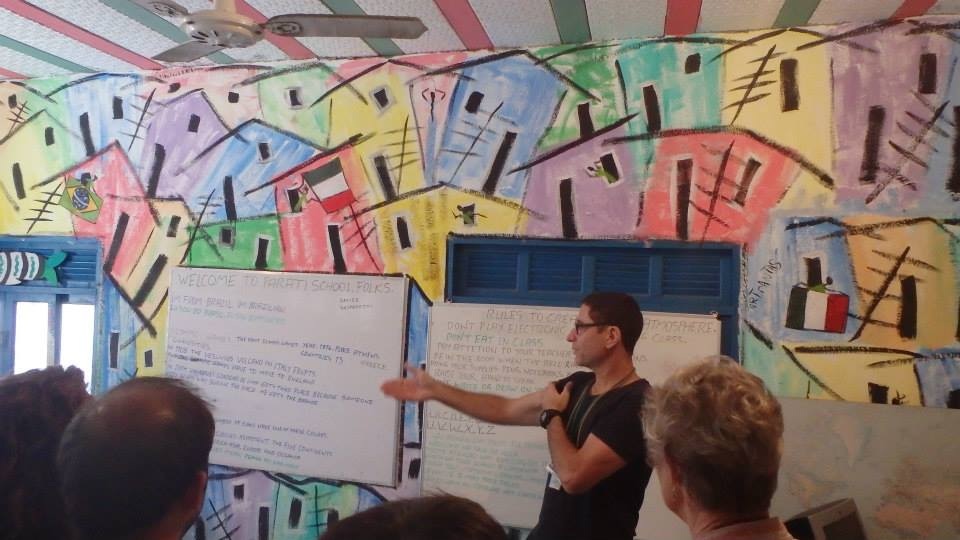 The final point on the itinerary was perhaps the most eye-opening. We took a walk through the labrynth of homes in the favela’s back streets. Again, Alfredo knew everyone by name and was greeted warmly at every meeting.

As each house is built on top of or alongside the last house, with no regulation or planning, you can imagine how complex the maze of houses becomes. There are even specialist companies which deliver post to these homes, as no ordinary post man would stand a chance.

As you decend deeper into the narrow alleyways, the sun dims away and the smell of damp becomes overwhelming. 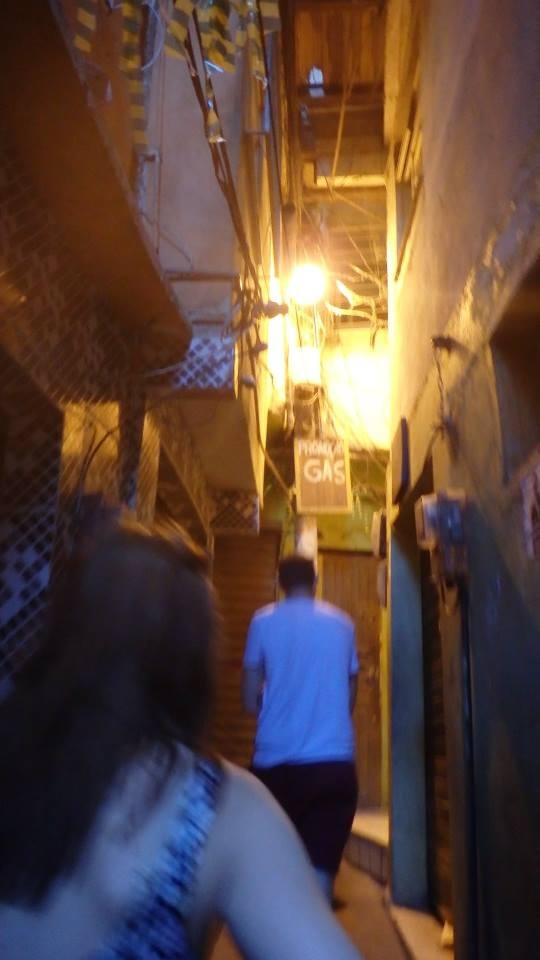 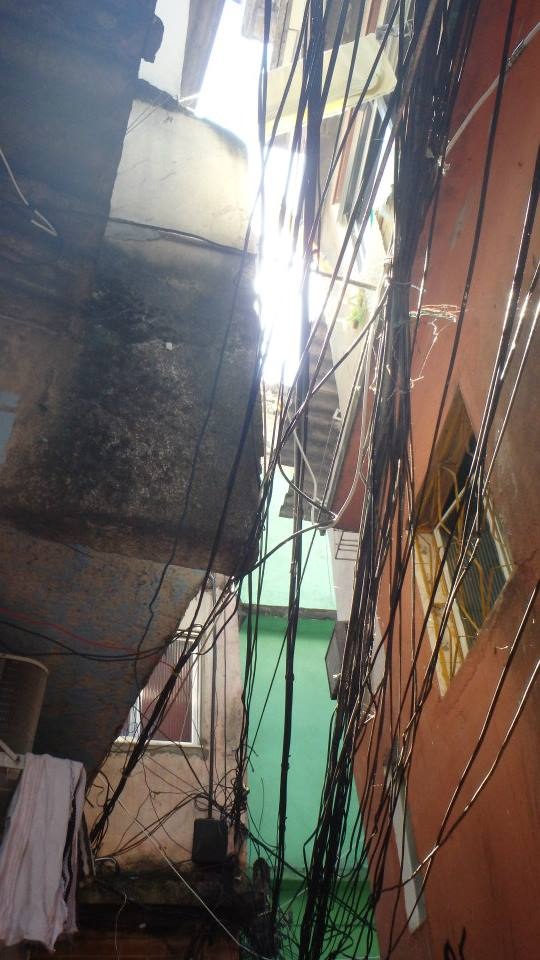 You might be surprised to know (we certainly were) that this favela lies immediately adjacent to one of the most affluent streets in Rio de Janeiro. Some of the houses on this street are worth incredible amounts of money despite the fact that they share a post code with a favela street. More surprising still is the lack of animosity between the two neighbourhoods, as there seems to exist a mutual respect. Perhaps this is because many of the favela’s inhabitants work in the larger houses, making the two communities inter-dependant.

Using the phrase ‘slum’ isn’t appropriate for the favelas, as the houses have running water and sanitation. Likewise, shanty town isn’t an accurate description as the buildings are brick and mortar, not corregated tin or iron.

Favelas are something unique to Brazil, but regardless of it’s name it is a living environment which should not be tolerated. Fortunately, the work or people like Alfredo and the (more recent) efforts of the State are beginning to pull the favelas into mainstream society improving conditions for its inhabitants.