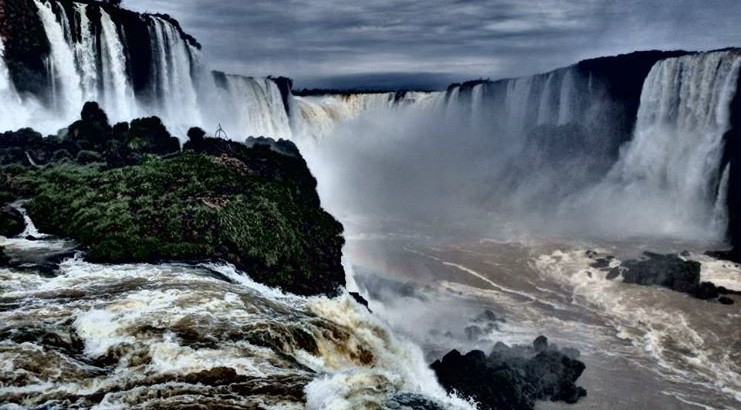 Iguazu Falls is the point at which the Iguazu River reaches and cascades over the Paraná Plateau, on the border between Argetina and Brazil. The vast majority of the river runs through Brazil, originating at Curitaba. Disappointingly enough for Brazilians, though, the river stabs Brazil in the back at the last minute as the largest portion of the falls lies in Argentina.

If you are at all superstitious, you may be interested to know that legend has it that a deity planned to marry a beautiful woman named Naipí, who fled with her mortal lover Tarobá in a canoe. In a rage, the deity sliced the river, creating the waterfalls and condemning the lovers to an eternal fall.

As the falls lies on a border, you can access the national park from Brazil and Argentina, but both offer completely different perspectives:

We arrived here first after a 27 hour journey from Paraty.  The bus dropped us at Foz do Iguazu bus station, which meant we needed another bus to get t the central terminal. The journey was easy on a local bus, but not exactly what you want after an epic night bus.

Once you arrive at the park itself you buy your ticket and then (you guessed it) take a bus ride from the entrance of the park to the falls.  When we first stepped off the bus we were a little underwhelmed. For months we’d been reading about the falls and how incredible they were, but the view was just ‘pretty good’.

As you walk you begin to see more of the falls and you begin to get an understanding of how vast it is.  The width of the falls grew and the noise and volume of water tumbling over became more and more intense.  The paths / viewing platforms continue until you head right down the devil’s throat.  That’s not a euphamism, the largest part of the falls which splits the Brazilian and Argentinan half is called Devils Throat. 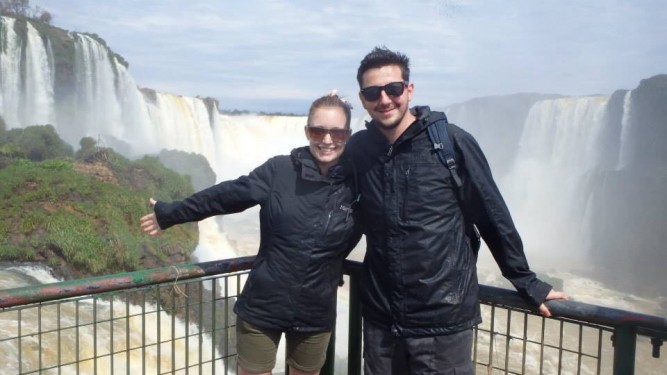 By the time you’ve stepped onto the walkway which takes you over the river and towards the falls you begin to feel the power of the water.  There is something palpable in the air which you can sense as you get closer, or perhaps thats just the mist: 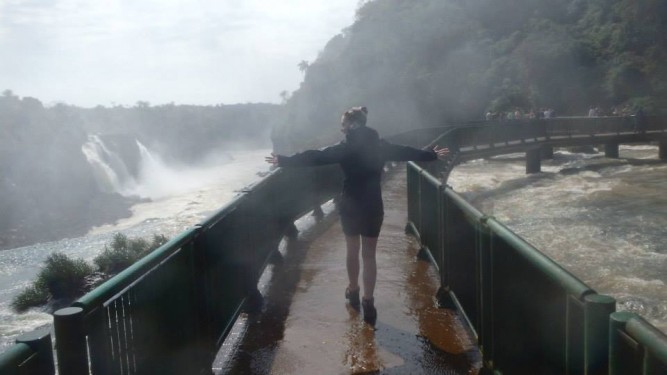 As if the view of the falls from the walkway isn’t enough, there is also a sort-of observation tower (think control tower at an airport) which you can take an elevator up.  The view is pretty amazing, but it lacks the adreninline rush of being inside the spray from Devil’s Throat:

All in all, you could visit the Brazilian side of the falls in 3 or 4 hours at most and take in some spectacular views.

The entrance to the Argentinian side of the park is a pretty similar excercise.  You can catch a local bus from the local town, purchase your ticket and take a small electric train to the falls.

The experience of the Argentinian side is far more civilised, in parts. The views – as most of the viewing platforms are high up – are much more panoramic than emmersive. 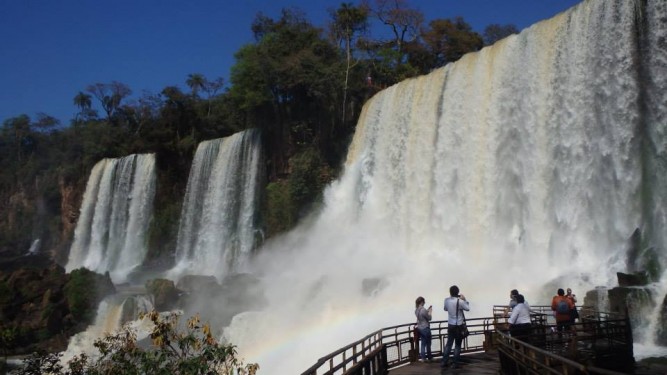 That’s not to say you can’t get stuck in, by taking a boat ride for example.  Sarah may have been a bit apprehensive before we set off, but she loved it: 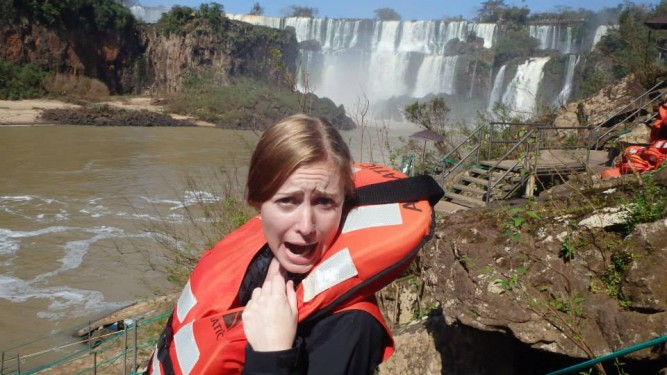 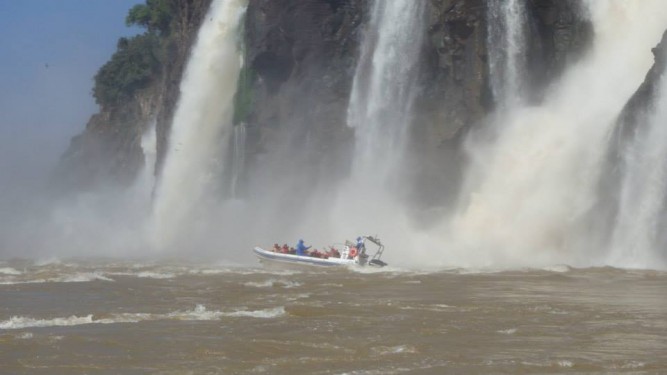 We got a bit wet. Don’t be foolish (like us) and try and keep dry with a fancy rain coat… it won’t work.  Wear as little as your modesty will allow, becuase this happens:

Video not working? Try this link.

The Argentinian side can easily take up a whole day as there are a number of treks you can take too. As an added bonus, we took a 4 km trek (each way) to a little waterfall which was hidden out of the way, but you could swim in it: