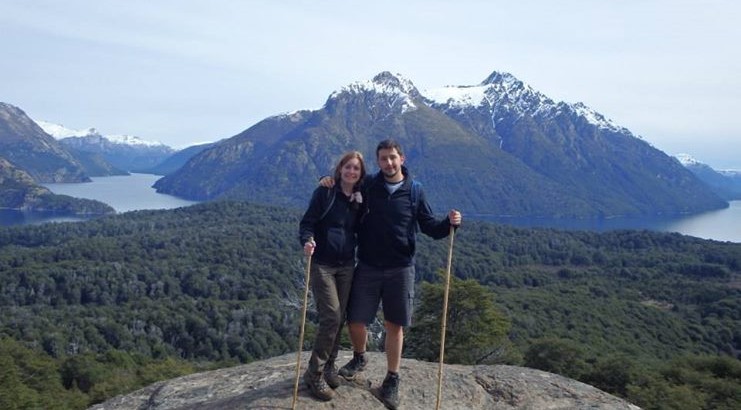 San Carlos de Bariloche is a small city situated in the foothills of the Andes on the southern shores of Nahuel Huapi Lake, within the Nahuel Huapi National Park.  Although incredibly popular with snow-sport enthusiasts, Bariloche is also becoming a hot-spot for cyclists and trekkers.

We, again, opted for a flight into Bariloche instead of a long bus journey. I felt very guilty, especially when our hostel friends found out and were extremely jealous, but the thought of the 28 hour bus journey was unbearable. The flight was around £60 more so we made a deal that we would cook in the hostel and make pack lunches every day in Bariloche to get even again.

The flight is only 1hr45mins and we landed before we would have even begun our 28 hour bus journey! Because El Calafate airport is so small the flight even left 30 minutes early because everyone was on board and ready to go. I’ve never known anything like it. To make things even more easy breezy, our luggage was on the carousel before we even got to it.

I would absolutely recommend flying if you can spare the cash. I definitely made sure I savoured every minute of it because I know I will be getting a load more horrible, uncomfortable bus journeys throughout our trip.

On our way into the town we were overwhelmed by the scenery. I thought after Patagonia it would be quite underwhelming, but it didn’t disappoint.

Our hostel (Penthouse 1007), in the centre of town, was located on the 10th floor of a building block. Once stepping inside we saw a balcony which offers a panoramic view of the mountains and laguna…in a hostel! Who needs the Four Seasons? 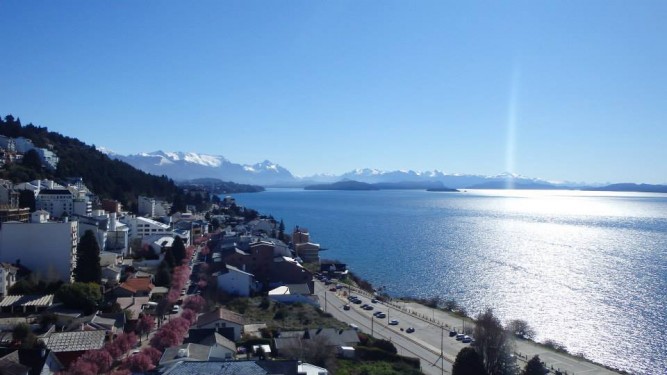 The weather was beautiful so we dumped our bags and headed on an explore. Once we’d taken in the view we went to the tourist information which was the best we have come across so far. The lady was extremely helpful giving us 2 maps and showing us exactly how to get to the activities we had already researched. She also told us where to go to get the best ice cream and chocolate (and the best pubs!) we watched the beautiful sunset from our balcony and relaxed into our new home for the next 3 days.

Things to do in Bariloche

We got up early to head to Cerro Campinario which involves taking a cable car up to a viewpoint over the 7 lakes in Bariloche. You can hike it up, which takes about an hour, but we thought we would brave the cable car as a change to hiking and it was only £10.

The view from the top was spectacular and taking photos there looked like we were stood against a fake backdrop! It was real though and the 360 degree view meant everywhere you looked had more mountains, more lakes and more piercing blue skies. 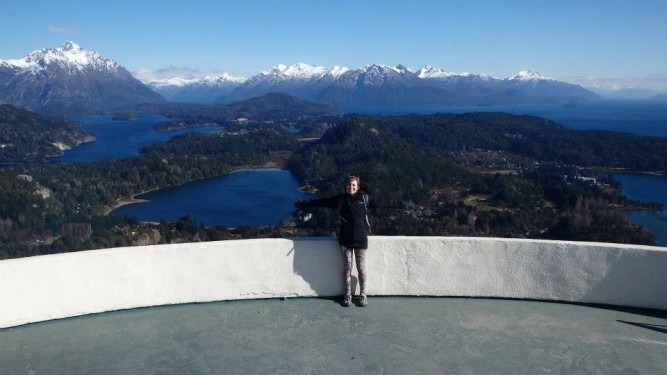 To make it better, there was hardly anyone there!

We went to the cafe which had full glass windows offering the perfect view as I sipped a ‘té inglés’ and Paddy even made friends with a cat who lived there. Bliss. 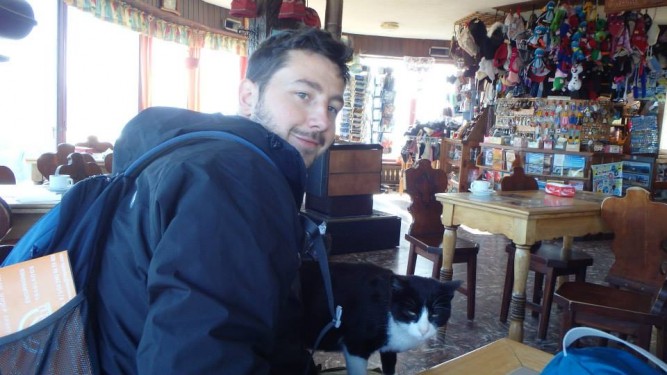 After a scary ride back down in the cable car we walked a few blocks to the bike rental store…we were about to embark on the Chico Circuit! It was so much of an experience that I had to write a whole blog of it’s own. You can read it in our next post

As with the archicture, there’s something in the food and drink which tells you Bariloche is trying to mimic an alpine ski town.

All over town there are dozens of artisan chocolatiers, the most famous of which being Rapanui.  For suprisingly cheap (around 1.50 GBP) you can pick up one of these bad boys or enjoy it in the shop’s cafe on the main high street. 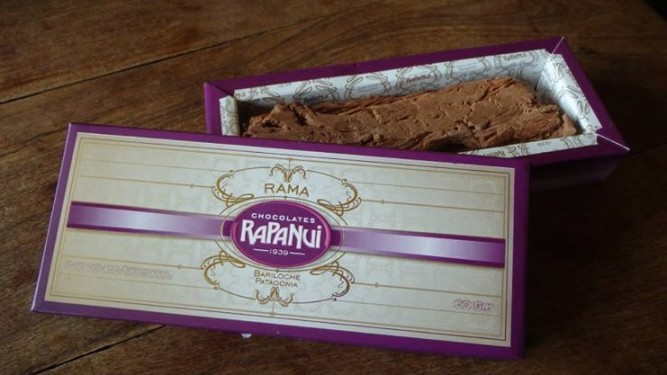 There are hundreds of different types of chocolate to choose from, so why not pop back everyday for a small bite!

The next day, after weighing up whether our legs were going to work for us or not, we headed for Llao Llao to hike up a ‘hill’.

We got off the bus at Hotel Llao Llao, the town’s most prestigious hotel, which can be viewed from most of the surrounding area. It took about 20 minutes to walk to the start of the hike and from here we picked up our trusty bamboo walking sticks and begun.

For the first third of the journey you are on quite flat land and walk through hundreds of bamboo trees which form a beautiful archway. 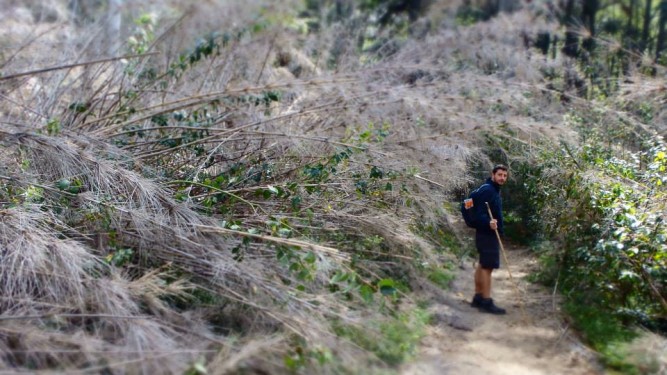 As you walk on the path becomes gradually steeper and steeper until, eventually, there is such an incline that the path begins to serpentine back and forth every 10 meters or so.  The trail is pretty well marked and well-trodden, but there are steep short-cuts through the bushes if you feel the need to rush.

All along the trail there are small breaks in the treeline which offer a glimps of the views on offer at the top of the hill.  Although tempting to linger, it was really more of a push to keep going to the top. 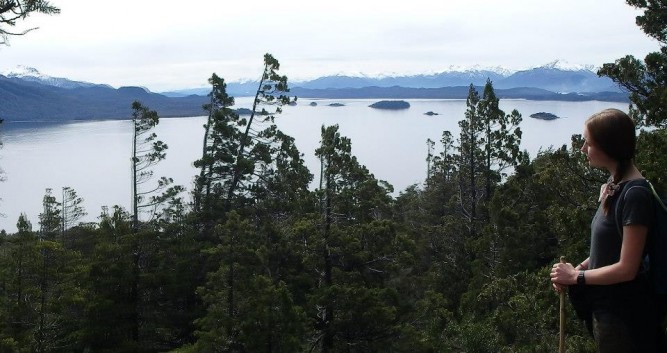 As you near the summit, the path becomes a little less clear where past hikers have each tried to find the quickest way to the top.  As you work your way through the thorny bushes and around a radio mast (which does ruin the ambience somewhat) you finaly reach the highest point.  The views, and the absolute silence, are breathtaking.

Although the vistas aren’t as wide as those from the  Cerro Campinario viewpoint,  from Cerro Llao Llao you are completely immersed in the wilderness and there is a real sense of peace, while you eat your well deserved mountain-top lunch. 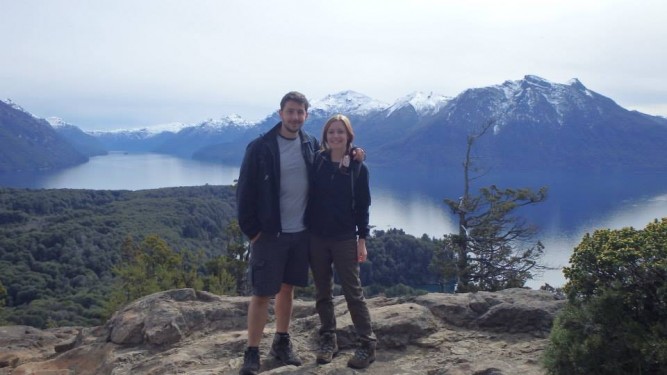