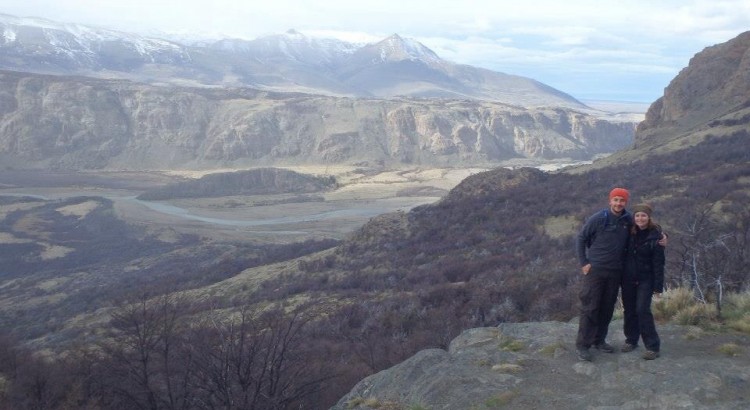 El Calafate and El Chaltén are both small communities (a city and a village, respectively) within Argentinian Patagonia which have become popular with trekkers and tourists due to their proximity to Los Glaciares National Park.

Originally we had planned to make the long journey to El Calafate from Buenos Aires by taking a few buses along the East coast of Argentina and stopping at a couple of towns along the way.  The day before we were due to leave the 4 day journey began to seem less appealing, so we looked into flights straight to El Calafate. We worked out that flying would only be about £30-£40 more and would save us at least 4 days of travelling.

We were not bothered about missing out the towns along the coast, as most of them were just stopping points to rest rather than places we wanted to explore, so we spontaneously booked our flights and felt pretty good, if not a bit guilty, about it.

We flew with Aerolineas Argentinas and weren’t sure what to expect, all we knew was that they offered the cheapest flight. We got to the airport and simply had to hand in our passports and they printed off our tickets, took our bags and we went straight through security…all without a single queue!

Once in the lounge we used the free wifi and relaxed in comfy chairs. Our flight boarded on time and we left pretty promptly. On the 4 hour flight we got given a little box of goodies (biscuits and cheese crackers), soft drinks and coffee. Pretty good seeing as we were expecting an EasyJet kind of service!

As we came into land the views were unlike anything I’ve ever seen. There weren’t any roads or houses. All I could see were mountains, lagoons, rivers and snow peaks. It was beautiful. Coming down into land I saw one road and the runway, there is nothing for miles. The blue of the lake as we landed was undescrible and no photos could do it justice. Everyone was taking photos before we had even got to baggage collection.

We took the shuttle bus into town and admired the landscape along the way. Coming into El Calafate felt quite like a ghost town. I think it’s in between being a traditional small town and a tourist hotspot as there is building work happening everywhere. I’m glad we visited when we did because I can imagine it will be unrecognisable in 10 years, maybe sooner.

The bus dropped us off at our hostel and we had a friendly greeting and were shown our rooms. We then went out for an explore of the town which basically consists of one street with souvenir shops, tour operators, restaurants and lots of stray dogs. We got down to the Laguna and were almost swept off our feet by the wind. It was freezing!

The next day we got a bus at sunrise to go to Mount Fitz Roy in the National park. This is in a town called El Chaltén which is a 3 hour bus drive away. I think most people could drive it in 2 hours because the bus was going ridiculously slowly and could hardly make it up the slightest incline! 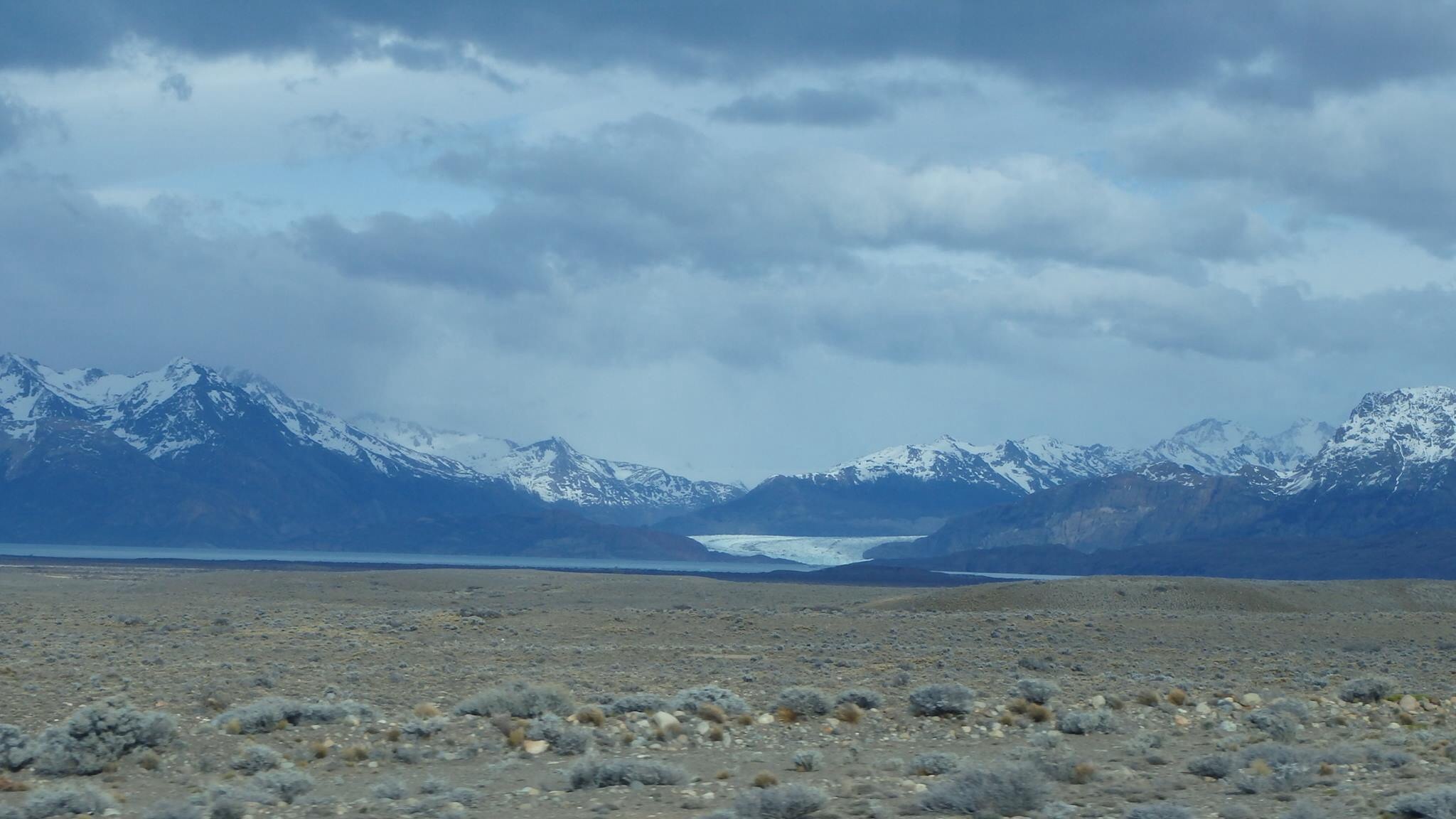 We didn’t mind at all though because of the views. We couldn’t take any photos that reflected how amazing it was, especially from inside the bus. But, wow, I was mesmirised for the whole journey and I couldn’t believe people around me were sleeping. Do not sleep, it’s incredible. The mixture of colours from the snowy mountain peak, the brown of the mountain, the piercing blue of the lake to the oranges, yellow mad green of the land was simply breathtaking.

When at the national park you get a quick chat at the visitors centre so they can explain the routes, how long they take and things to be aware of. They are very strict about food, fires and smoking in order to protect the park. 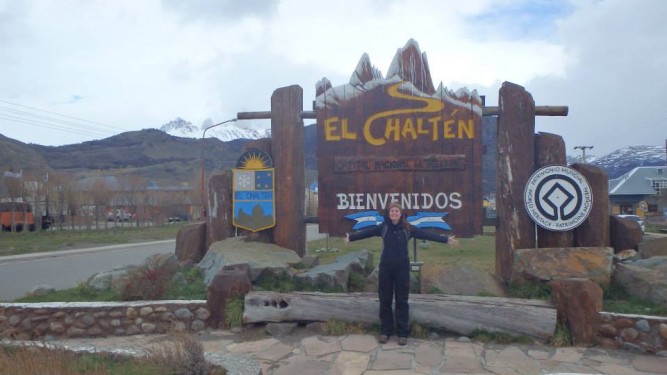 We decided which route to take and set off. We were hiking to Laguna Capri which is only a ‘small’ trek. To get to Mount Fitz Roy itself would take you 3/4 days and you would need to camp. The Laguna, though, offers a view of the peaks and looked beautiful so we thought that would be a sensible and safe option in the time we had (5 hours).

The walk to the start of the trail was a feat in itself. There was such a wind blowing towards us as we were on an open plaine I was laughing so much, nervous giggling, as I was worried how on earth I was going to do 10k of this!

When we got to the start of the trail the wind eased off. It started at a pretty steep incline in a wooded area. All the trees were broken and rotten, it looked like in the Lion King when Scar and the hiyinas take over! Every time we got to a clearing there was intense wind but the views were astonishing.

As we climbed up and up the weather started to turn. We were walking through clouds and there was a bit of haily-snow that would hit you hard in the face. Unfortunately, by the time we got the Laguna you couldn’t see any of the mountain peaks. The Laguna itself was pretty but it felt very disappointing to me and I preferred the views on the way up, but I’m sure that was because of the sun. We decided to power on and head to the viewpoint in case there was a clearing. With all the wind we thought there might be a chance of it ‘blowing over’. We couldn’t see anything from any of the viewpoints and the weather was harsh. 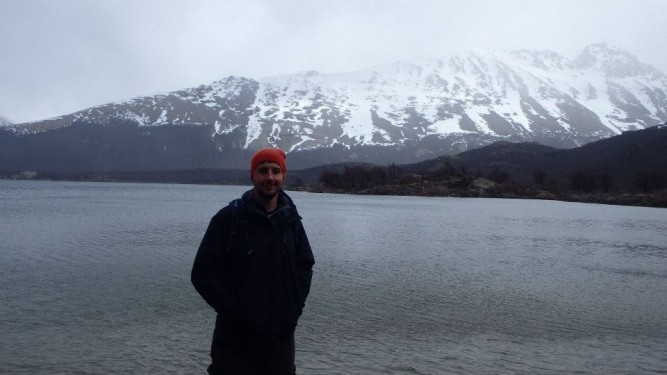 We made our way back down the hill. The further down we got the sleety snow eased off and the sun was there. We kept looking back up but there was no improvement. This is very common as only 1 in 10 people get to see the peaks and have a clear day, unfortunately we were not one of the lucky few.

Although we didn’t get to see what we were hoping for, I really enjoyed the trek and we had some soup and a hot chocolate at the bottom to warm up. We headed back to El Calafate and had a very early night. 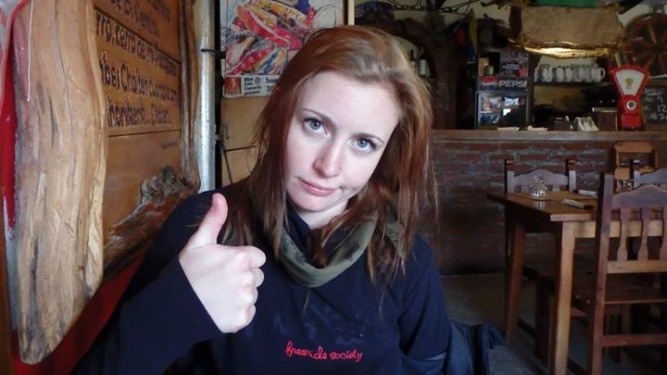 The next day we were picked up at 7am for our minitrek across Perito Moreno glacier. You can read all about that in our next blog. 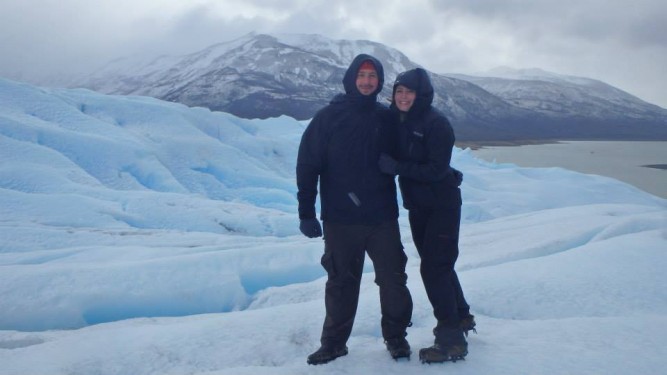 The following day we took a flight to Bariloche. I absolutely loved Patagonia and felt that we maybe didn’t spend as much time as we could have done. On the other hand it was expensive and we had exhausted both our funds and bodies in the 3 days we had there.

Patagonia is uniquely beautiful and I’m so glad we took the long journey down to get to see it. It’s definitely worth a visit if you are in Argentina or looking for something a bit out of the ordinary.