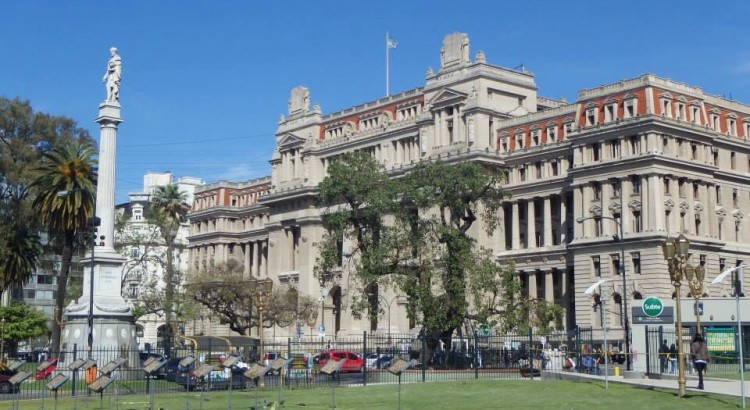 Buenos Aires is the capital and the largest city in Argentina. It is the most visited city in South America, ahead of Rio de Janeiro. We wanted to find out why…

When setting off for Buenos Aires, we opted for the overnight bus from Iguazu. There is only one that goes in the evening and this is ‘cama’ (bed), so is more luxurious than the others we had taken. We wanted this though as the journey is 17 hours long.

We thought that this would be the same as semi-cama but with more space and a more reclined chair. It was actually much better. We had a hostess who served us throughout the trip and in total we got an evening meal, soft drinks, hot drinks, whiskey, champagne, breakfast as well as blankets and films. We ate our pasta and pesto whilst sipping drinks and watched The Impossible. I was glad we got to watch it because we had been told to watch it before we go to Thailand and I really enjoyed it.

We managed to sleep quite well throughout the journey (apart from when they suddenly decided to make us all change buses at midnight and nobody spoke English) and we got to BA by mid afternoon.

The first impression of the city is that of ‘poverty'; not quite reaching destitution, but living conditions which are extremely poor. There are many run-down living areas as you make your way into the centre from the bus station. To me this felt a lot worse than the favelas, as at least the favelas give a feeling of community and contentment but here it just looked like a slumtown and was quite upsetting. It was my first and last impression of the city as we entered and exited it. The centre doesn’t feel impoverished but it certainly doesn’t have some things we would take for granted…like proper pavements.

Getting to Know the City

Once settling into the hostel we went to check out San Telmo market. This was just around the corner from where we were staying and was a really lively street amongst the antique stores which were selling handmade crafts. We got there around 6pm and when it closes (at 7pm) it turns into a street party filled with live music and people drinking.

The next day we went on the free walking tour. We felt there was no where near as much to see as there was in Rio, but none-the-less the city had some interesting stories to tell.

We found out that Buenos Aires didn’t become the capital city because it was rich with resources like oil or gold, like many other Latin American cities. It was simply because it happened to lie in the centre of Argentina and near a coast, making it the perfect location to build a port. Over time, the small port city grew in population and in wealth – particualrly throughout the 19th century – until it became the city it is today.

The things I found most interesting about the tour were:

Buenos Aires’ primary opera house – voted the third best in the World by National Geographic – is interesting for a very subtle reason. The building was designed by 3 seperate architects, all of which had a different vision of how the building should look. 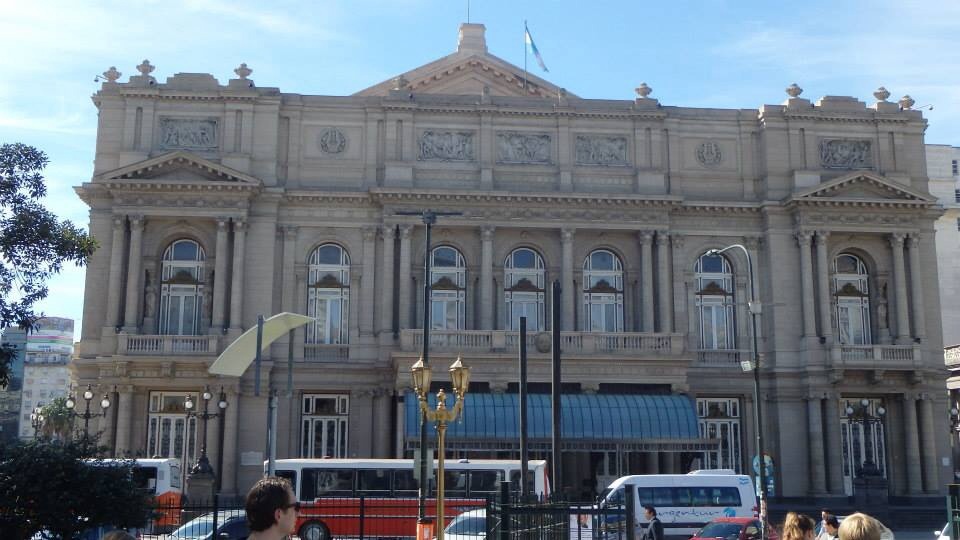 Buenos Aires’ first skyscraper built in a ‘modern’ style is the Kavanagh Building, named for Corina Kavanagh who comissioned it. However, the most interesting part of the story is why the building was built.

The Anchorenas, a wealthy aristocratic family who occupied the San Martín Palace paid for the construction of a church at the opposite end of the plaza, in order to be good Catholics. When Corina Kavanagh (a weathly, but non-aristocratic lady) became engaged to the son of the Anchorenas, they made their disaproval of the engagement widely known. 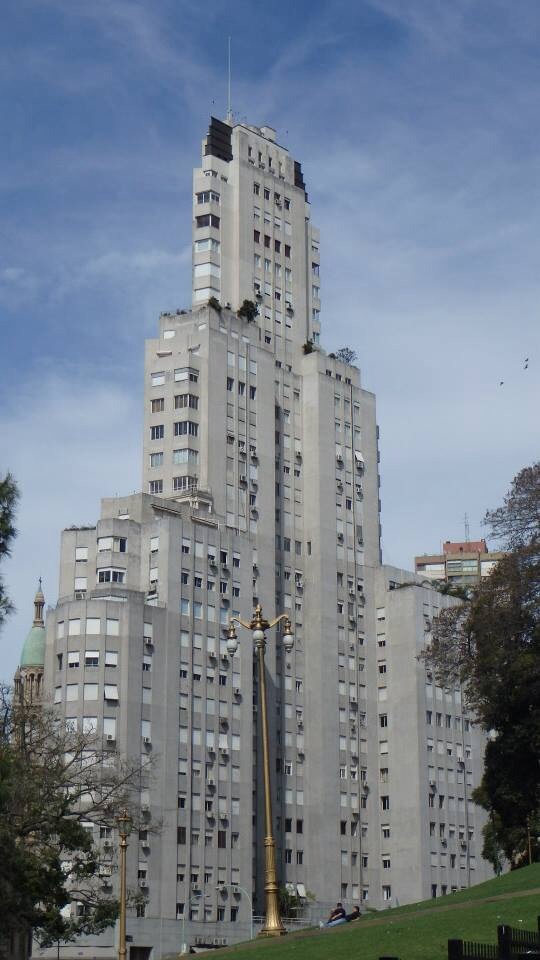 On the Plaza San Martin, there is a poignant reminder of the losses suffered by the Argentinian’s and a memorial to the 649 Argentinian lives which were lost. The location of the memorial was chosen very carefully: it sits directly in front of the Torre de Los Ingleses (Tower of the English) which was a gift from the local British community to the city in commemoration of the centennial of the May Revolution of 1810. As of 1982, the year of the war, the tower was renamed Torre Monumental and the square it sits in was renamed from Plaza Británica to Plaza Fuerza Aérea Argentina. No love lost there, then.

During the construction of the avenida large parts of the city needed to be destroyed, including many Parisian inspired buildings which lead to Buenos Aires’ nickname of ‘Little Paris’. One such building was the palace of Ortiz Basualdo (Palacio Ortiz).

The Palace changed hands a number of times but eventually it was sold to the French government to be used as their embassy, which could not legally be demolished as it is French soil. The French government refused to submit the embassy building for demolition, and local preservationists also opposed the move, as the building is widely hailed as an architectural masterpiece.

As a result, the widest street in the World was built around the French embassy building.

The tour takes you to many other places too, including the grave of Eva Peron. We found that although it was interesting in parts, there really isn’t that much else to see.

After the tour we went on a long walk of the city. We walked for about 3/4 hours and to be perfectly honest, we didn’t really find that much of interest.

The next day we went to visit La Boca. This is a neighborhood, or barrio, of the Argentine capital. It retains a strong European flavour, with many of its early settlers being from the Italian city of Genoa. It is also well known for the football club, which you can visit and go to a game. We walked past but aren’t football fans so didn’t go in. 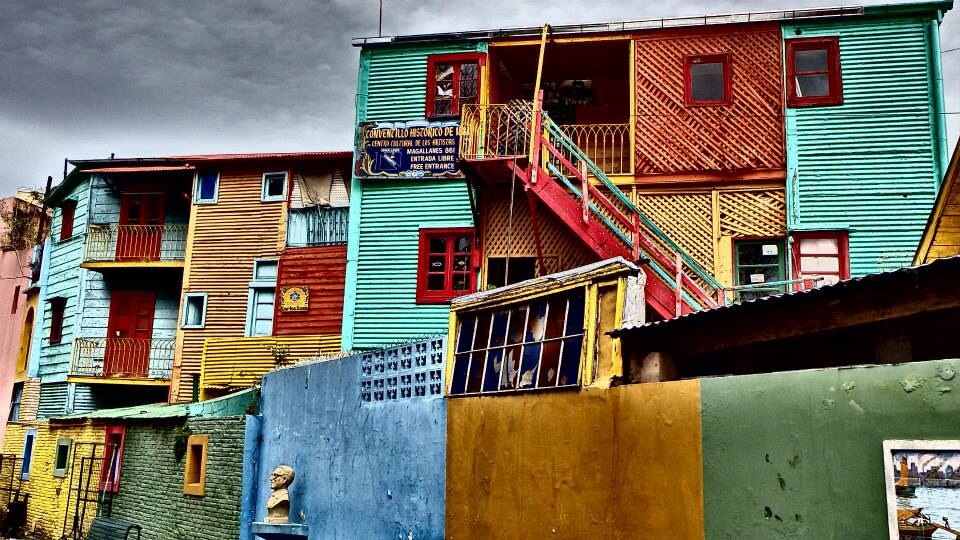 Again, we were quite disappointed with this. I think we were probably quite unlucky because we got there at a time when no one was there and it was pouring with rain so none of the stalls were open, but the main touristy area just seemed a little run down and forced, at the same time. 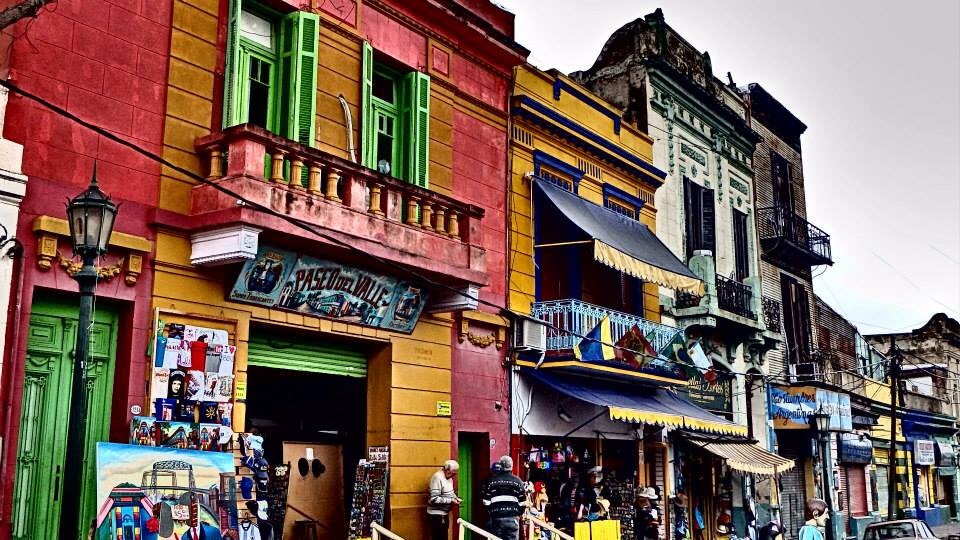 I think BA would suit someone who likes a party as there are lots of bars and live music in the street, and of course tango. But for us, we felt there wasn’t that much to do…so we happily moved on to Aregentinian Patagonia.