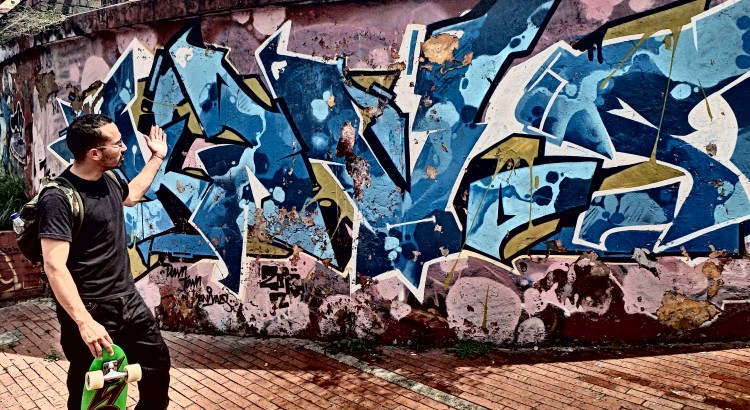 Bogotá’s Barrio Candelaria is home to a vibrant and diverse street art culture, with crews and solo artists arriving from around the World to prove themselves, hoping to make it big. Little wonder, as some of the city’s bigger names have really begun to make the step from street artist to commercially successful entity.

Artist StinkFish, for example, is now able to sell canvas works as well as being flown around the world for commissioned pieces. At time of writing, there is a mixed media canvas piece for sale on the London West Bank Gallery website for GBP£2,200). 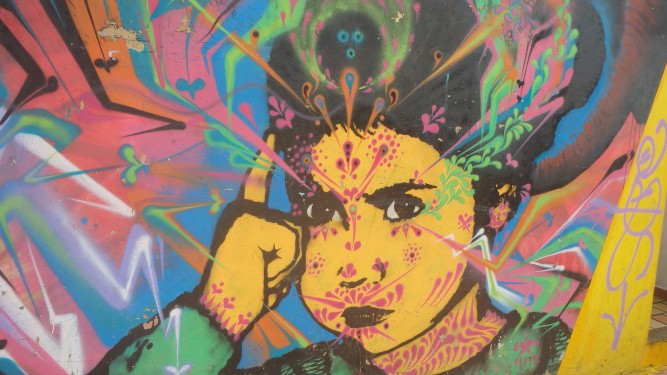 Art in the Community

The growth of street art in Bogotá is in no small part thanks to the local community in Candelaria, which has accepted street art as part of Bogotá’s cultural identity as opposed to treating it as illegal graffiti. For example, the Bogata Beer Company (a growing chain of craft beer pubs) commissioned a local street artists to re-design their ‘beer truck’ logo in 2010.

Many other local businesses have followed suit, as has the local governing bodies who have begun to provide safe and legal areas where local school children can learn to paint under the tuition of Colombian artists. 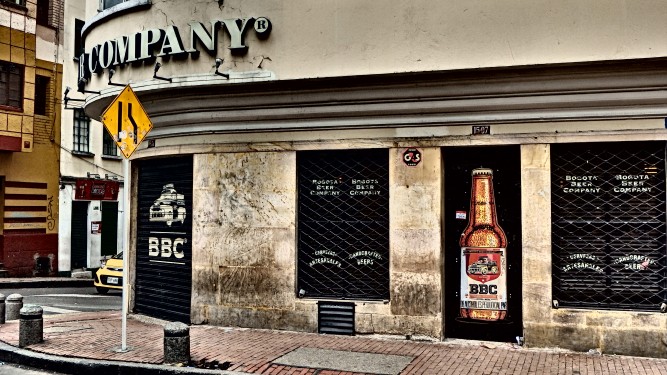 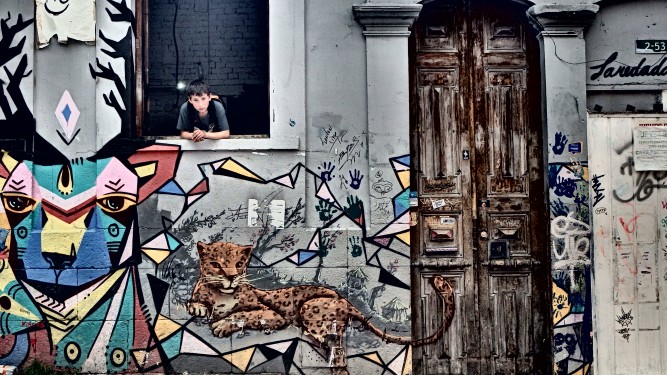 A local community centre is redecorated regularly by graffiti artists. 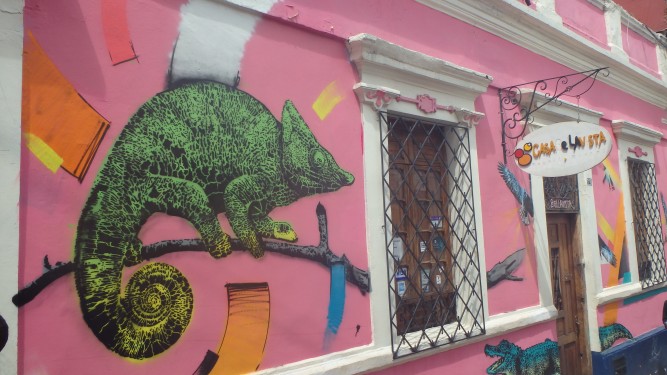 A local boutique uses graffiti artists to decorate the outside of the store.

With Colombia’s turbulent past and current political climate, there is no shortage of inspiration for artists new and seasoned. As you walk the streets of Bogotá the pieces range from abstract and beautiful to politically volatile and controversial, conveying messages of the civil wars and institutional corruption.

One recurring theme is that of the displacement and exploitation of Colombia’s indigenous people, something which is very close to the heart of most locals.

The civil wars in Colombia, considered the Worlds’ oldest internal armed conflict, have led to the displacement of 25% of the country’s indigenous communities, who continue to suffer human rights violations at the hands of guerrilla communists and paramilitary groups.

“There are around a million indigenous people in Colombia, belonging to more than 80 different Indian-American groups with over 60 separate languages. Nearly all of these groups have been victims of forced displacement or are threatened by it as a result of the internal armed conflict.” The U.N. Refugee Agency.

Bogota’s street artists, or at least those brave or politically minded enough, have united in support of Colombia’s indigenous communities:

A mural depicting an indigenous woman. 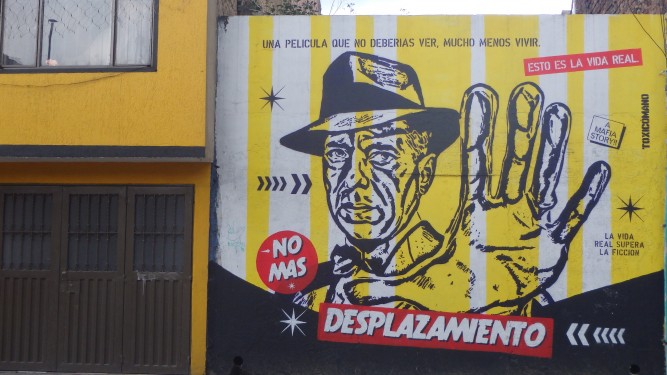 No Mas Displazamiento, No More Displacement.

Art for the Sake of Art

Sometimes art exists for no other purpose than itself, to create enjoyment and to allow the artist to express himself. As you stroll around Barrio Candelaria and the rest of Bogota itself, the size, scale and variation of installations is dramatic. There are just a few of the pieces we saw during our time in Colombia’s capital city: 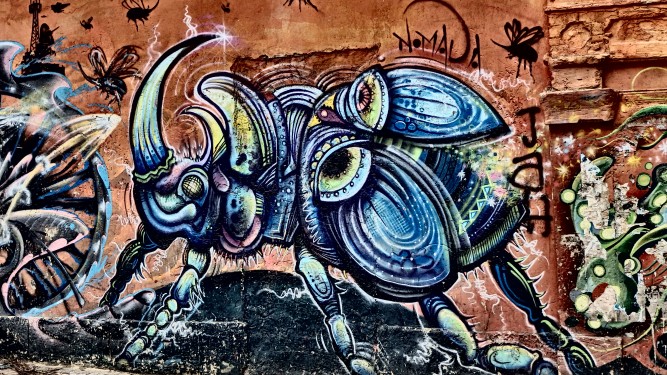 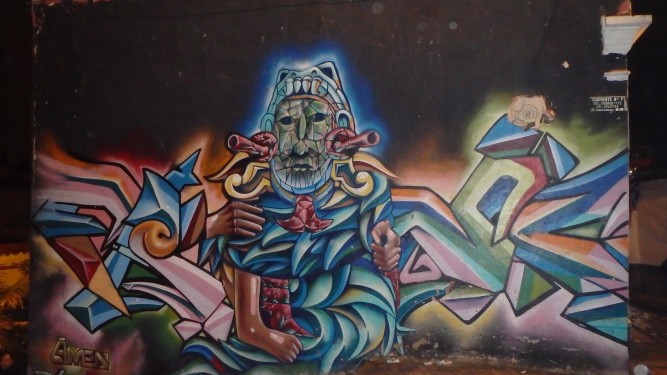 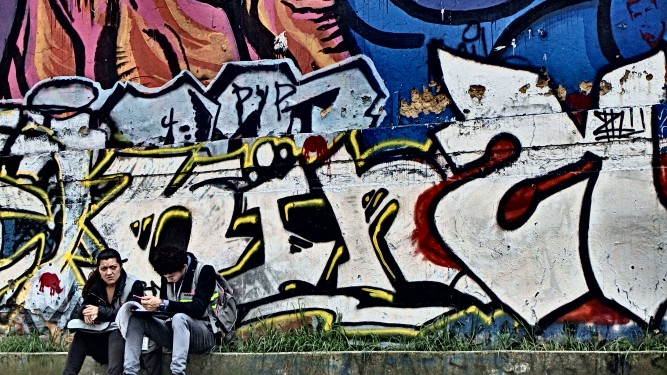 It was refreshing and inspiring to take a tour in Colombia and learn about something other than coffee or drugs, and to see how the community and the local government are embracing this art form and using it in a positive way, to the point where Colombia is becoming a ‘world leader’ in street art and the quality benchmark for global graffiti artists.

The only true way to understand the works of the various artists and the cultural past of the city is to take the tour yourself. If you’re ever in Bogotá, check out the free Graffiti Tour, everyday at 10am in the Plaza de Periodistas.