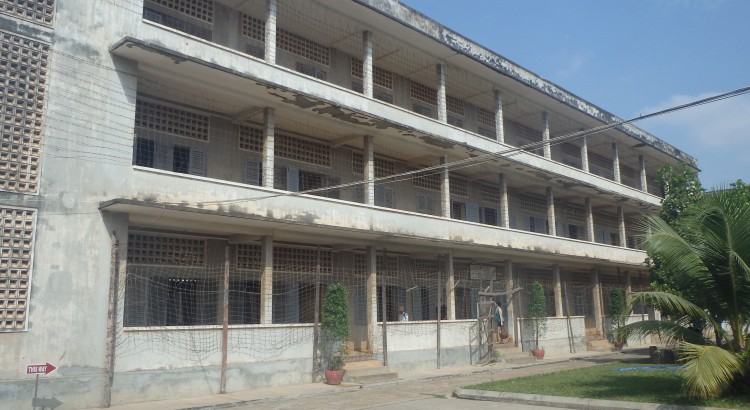 You don’t see many old people in Cambodia. If you do, you have to wonder about the life they lead.

Pol Pot’s Khmer Rouge regime were responsible for the murder of an estimated 2,400,000 people – which equates to 33% of the total population of Cambodia – with countless more being killed through starvation and sickness between the years of 1975 and 1979. And to be honest, much of the world know little about it.

We knew we were in for an emotional day when we visited the Tuol Sleng Genocide Museum and the infamous ‘killing fields’ in Phnom Pehn. Having read ‘Daughter of Cambodia, First they Killed my Father’, we were deeply moved by Loung Ung’s harrowing story, one which was sadly endured by millions of other people, too.

We first went to the museum where Kang Khek Iew (known as Comrade Duch), a close associate of Pol Pot, was personally responsible for the torture and execution of 20,000 of his own people. 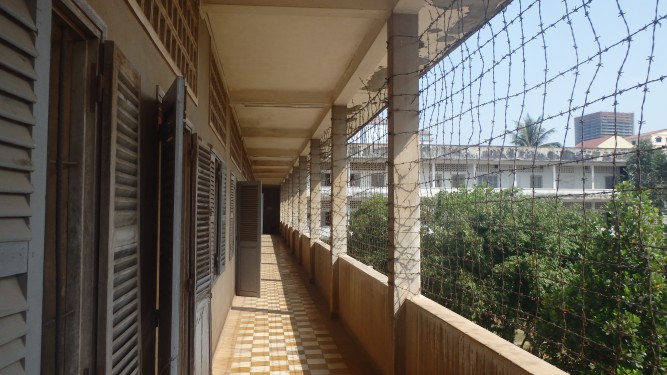 The former high school which was turned into Security Prison 21 (S-21) during the Khmer Rouge regime now contains the Tuol Sleng Genocide Museum, featuring room after room of make-shift cells and torture chambers where the walls and floors are still blood-stained and rusty bed frames and torture equipment still lie. 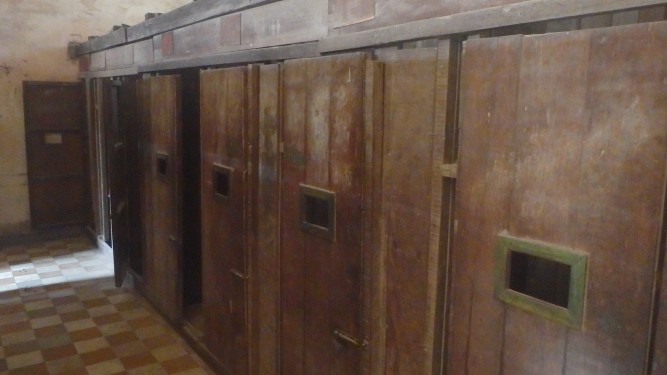 The victims were ‘interrogated’ until they were forced to sign papers admitting to crimes which they blatantly didn’t commit, such as spying on behalf of the CIA or KGB.

The museum contained a few inspiring survival stories of the victims of S-21… and I don’t say few lightly. Only 12 of the estimated 20,000 prisoners actually made it out alive, with 17,000 of them being taken to the killing fields.

Chum Mey, Bou Meng, and Chim Math. All three were kept alive because they had skills their captors judged to be useful.Bou Meng, whose wife was killed in the prison, is an artist. Chum Mey was kept alive because of his skills in repairing machinery. Chim Math was held in S-21 for 2 weeks and transferred to the nearby Prey Sar prison. She may have been spared because she was from Stoeung district in Kampong Thom where Khang Khek Ieu was born.

Vann Nath, who was spared because of his ability to paint, died on September 5, 2011

After leaving the museum we made the journey 7.5km south of the city to the Choeung Ek Genocidal Center and the so-called killing fields themselves (most tuc-tuc drivers will offer a set price to take you to the museum, and wait outside for you before taking you to the killing fields and back to the city – US$10 – $15).

We started our audio tour (an incredibly moving narration by one of the survivors of the prison) and headed on a deep and emotional journey around the site, listening to facts and personal stories whilst coming face to face with the mass graves.

When people were transported here from the S-21 prison, blindfolded, there was no way they were to know what was to happen next until it was too late.

As you walk around you can actually see fragments of bones beneath your feet. These are continuously coming to the surface, especially during the rainy season, and are collected by the staff every two months.

The saddest part for me was when we arrived at the ‘killing tree’.

Situated next to a mass grave of women and children (yes, the Khmer Rouge murdered innocent babies, too; it was believed the children could grow up and seek revenge for their parents) the killing tree was discovered to be a cheap and efficient method of execution.

The soldiers would kill the babies by literally swinging them against the tree breaking their skulls, and then they would be thrown into the mass grave. The mothers, watching, would then be executed and thrown in with them.

The killing tree was discovered as it contained blood and bone fragments embedded in it. Sad, almost unbelievable, but true. It is now covered with brightly coloured bracelets and ribbons left behind by visitors, as a sort of ad-hoc memorial. 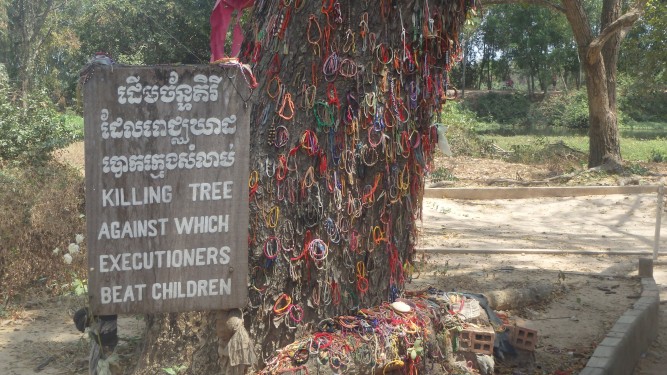 Since the discovery of this hideous method of killing innocent infants, which was done to save money on bullets, Comrade Duch broke down in tears in court as he admitted to ordering these deaths, in compliance with official Khmer Rouge policy.

Even listening to his confession an anger boiled up inside me as to how he could have done this. Surely no matter how much you believe in a political party being better for the country you must realise something isn’t quite right when you are ordering this many deaths, on your own people, in this disgusting manner.

The final part of our tour was entering the Choeung Ek memorial, built in the style of a Buddhist stupa. at 62 meters high, the memorial features glass sides and layer after layer of human skulls, totalling 5,000 of those executed nearby, a stark reminder of the genocide that took place less than 50 years ago.

In order to ensure the memorial depicts the brutal truth, the skulls are piled up as high as I could see and are colour coordinated to tell you the way in which the person was killed. Most are by metal rods and knifes slashed through the skulls; very little were actually shot as the Khmer Rouge did not want to waste the bullets on the ‘unworthy’.

Before we left we sat on a bench in silence and listened to some local music. This music was blasted out from the fields to mask the screams of those being executed, to prevent other prisoners from panicking.

Now you might realise why it is situated so far from the city centre. Sat there, we listened and we prayed that this extreme genocide would never happen again.

Get from Santiago Airport to Valparaiso, Chile 12 Feb , 2015