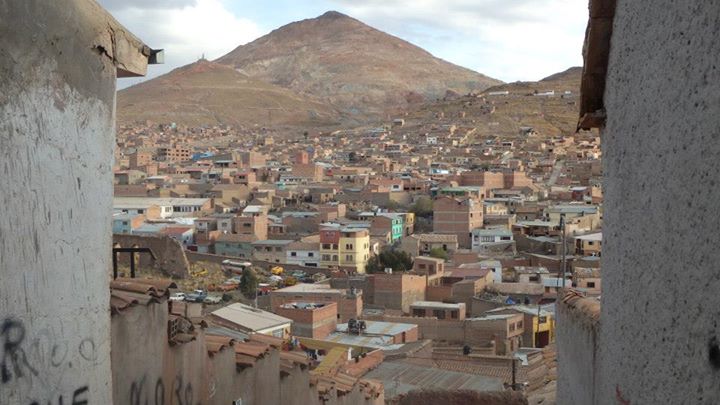 At 4090m above sea level, Potosi is the highest city of it‘s size in the world. Founded in 1545 as a mining town, it soon produced fabulous wealth, becoming one of the largest cities in the Americas and the World, with a population exceeding 200,000 people. Between 2 and 8 million ‘miners’ (slaves) worked and perished in the mines throughout the three centuries of colonial rule, most of whom would live below ground for weeks or months at a time without coming-out for fresh air. We we keen to explore the city to see whether the gloom from this era still hangs over and how the locals live today.

We took the 4hr bus ride from Uyuni to get to Potosi, our first real experience of Bolivia. Looking around at the scenery the first thing I noticed about the landscape and how it is different from the other South American countries was how much greener it is. The ground is still very dusty and baron, but there is a lot more vegetation and a lot more wildlife. During rainy season it becomes even greener giving vegetation not only to the Bolivian families to sell, but also to the cattle who graze on the land.

From the bus it’s hard to get your head around the fact that Bolivia is a third world, developing country. I’ve never been to a third world country before and visiting the cities doesn’t always give you a real picture of how people live and how impoverished they are, but I still wasn’t sure what to expect. With Evo Morales claiming presidency (12th October 2014) for his third term it definitely feels like the country is doing a lot better, but the GDP per Capita is only 2,020 compared to 36,208 in Great Britain!

We arrived at the bus terminal in Potosi after winding up several tight streets. At first I was a little on edge checking I had everything and nervous about my belongings. But as soon as we got in the taxi and headed for the hostel I was really excitable. 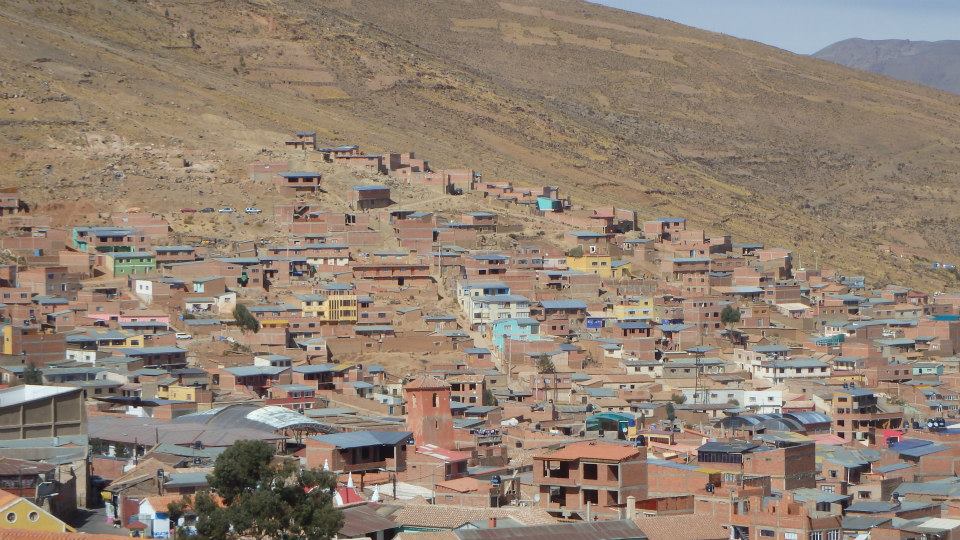 Sat in the front seat of the taxi we shot off up the steep hills beeping every other second at every car on the road. Along the pavements were hundreds of women with their children selling drink, food, clothes and all sorts of things. People were eating in the street, it was extraordinarily busy and exciting. 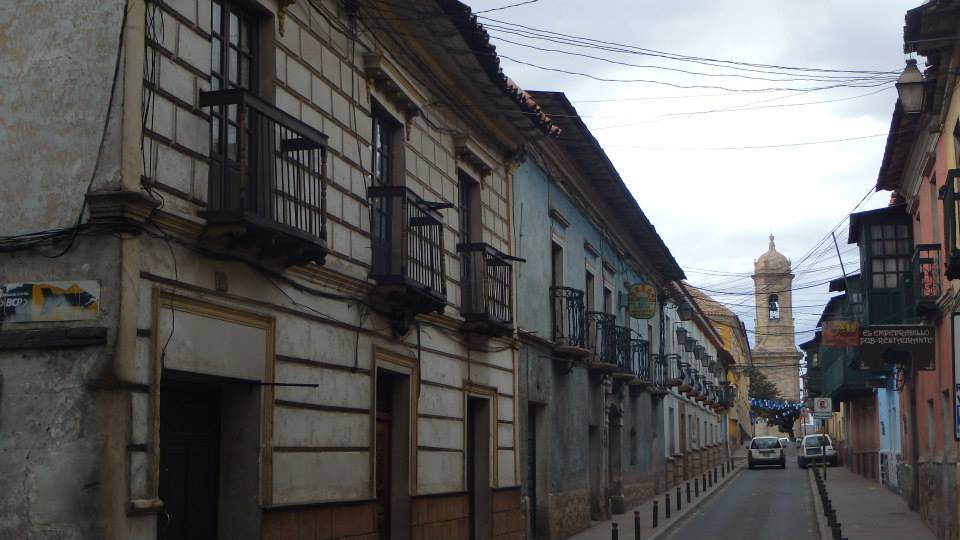 As we got closer to the hostel I could tell we were entering the more touristy area. Restaurants aware appearing everywhere and so were the backpackers. This is where all the hostels are located…but I wanted to head back down to where we had begun in the hustle and bustle of the local markets.

After dumping our bags we did just that. We found a square where they were selling sizzling pork burgers. Yum. They only cost £0.30 each! 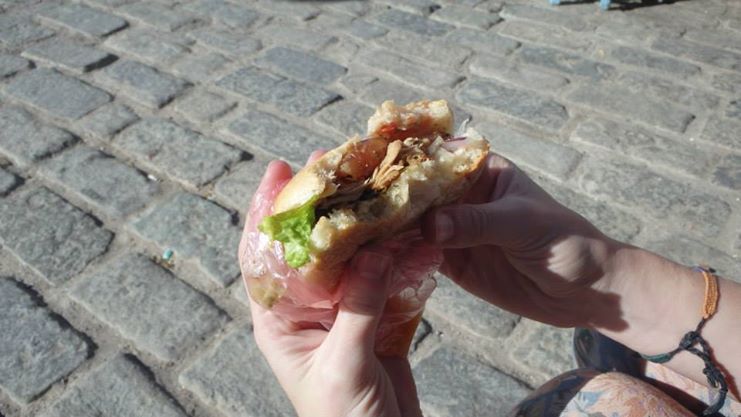 Afterwards, we headed further down the hill and came across a markets sprawling the width of the road. Whilst looking for socks I found rows of women cooking llama meat and sausages on coal barbecues. You guessed it, we had a plateful! It was so nice to sit and eat with the locals instead of up the hill with the tourists. 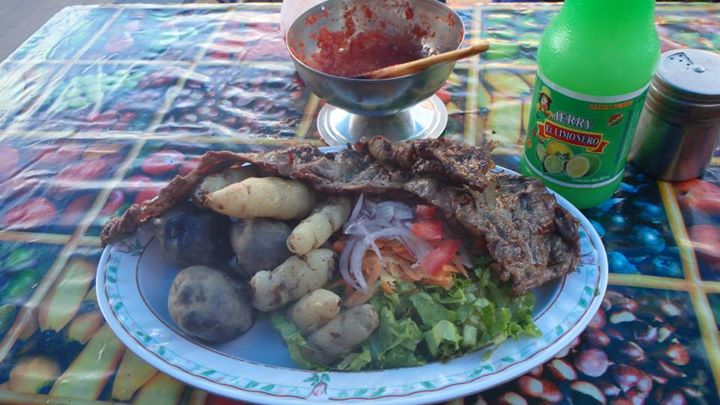 It was £2.20 for a plate big enough for us both to share…funny thing was that we weren’t given any cutlery so had to eat it with our bar hands.

Up until now, we haven’t considered taxis unless there was no other way as we try and be sensible with our money and taxis are expensive. Bolivia is a different story. Every trip will only cost you about £0.80 and being up against steep hills and the un-signposted streets we found ourselves quickly jumping into taxis out of habit.

I was quite happy about this as the buses (although only 15p a journey) looked seriously complicated and crowded. It seems that most of the locals took taxis as they didn’t have cars. All the streets are so narrow I don’t know where they would have put a car even if they could afford one! 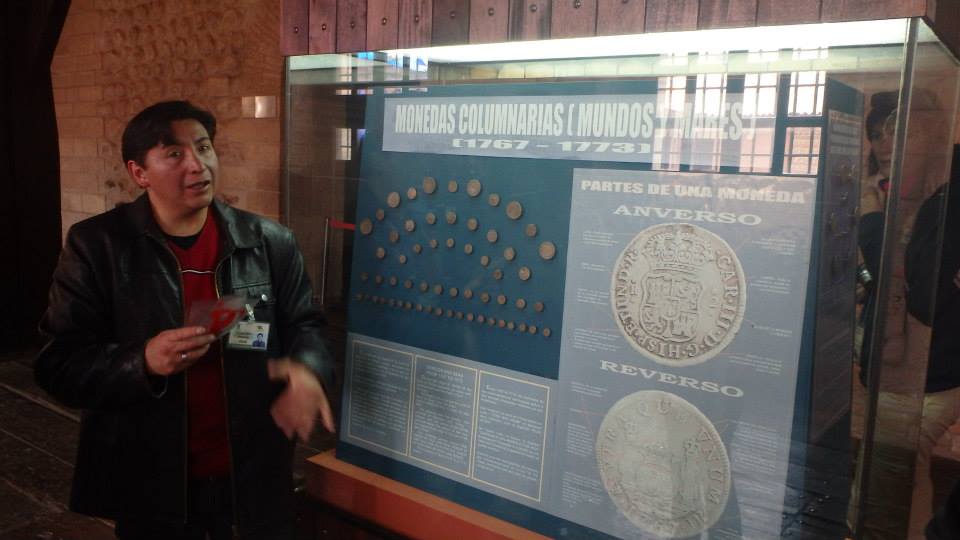 The Mint appears on every “must see” list for Potosi. It is a vast and strikingly beautiful building that takes up a whole city block. It was built between 1753 and 1773 to control the minting of colonial coins. The Mint was created here when silver was discovered at Cerro Rico. 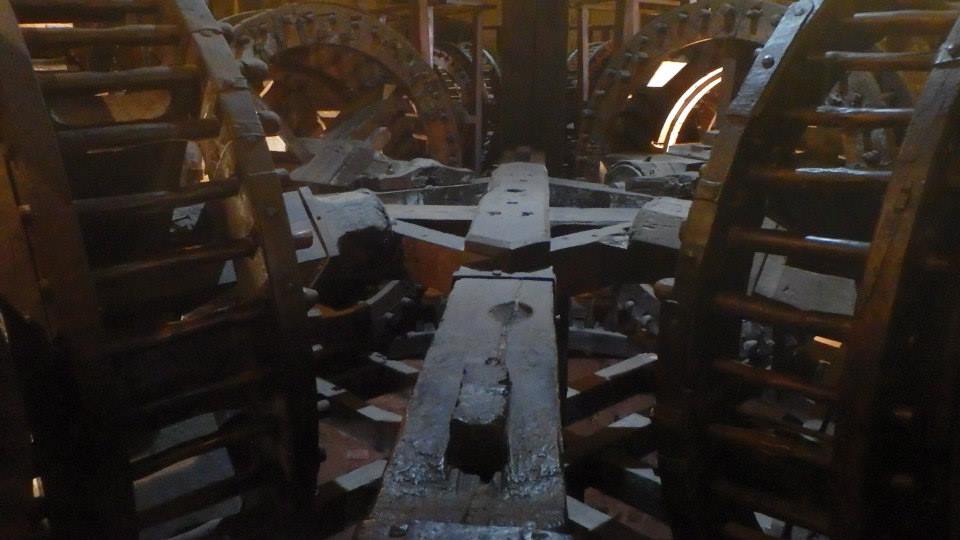 The tour was very interesting and not only talked about the money production but more importantly how much struggle and hardship was involved for the Bolivian indeginious people and how many of them died in the mines and producing the coins for the Spanish. Shockingly, on average a miner only survived for 6 months.

Although really interesting, we felt our tour was extremely rushed as it was a Sunday and they wanted to close, however it was definitely worth the visit, especially if you are not going on a mining tour as the two overlap a lot. 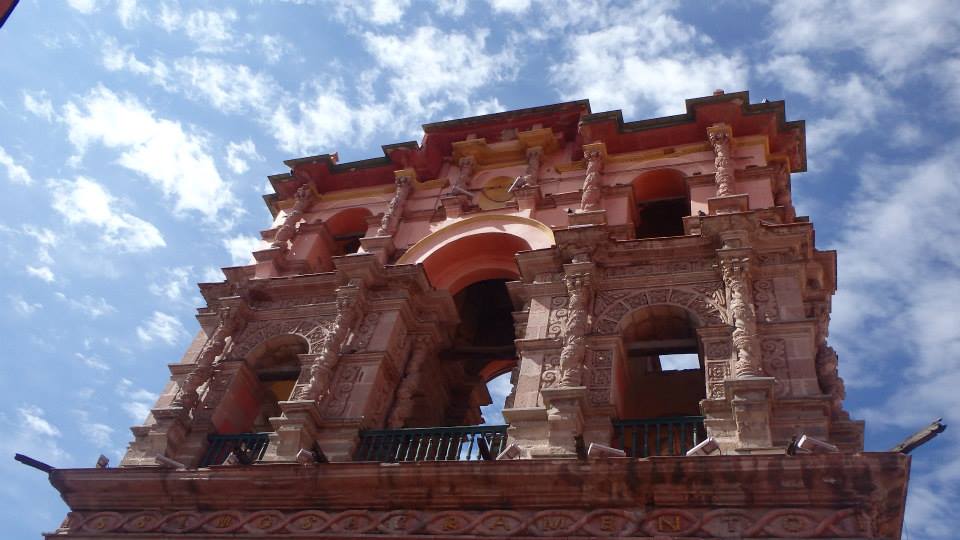 For a great view of the city head to this fantastic old church where you climb up a dark, narrow spiral staircase to reach the bell tower.

It is one of Potosi’s many examples of Mestizo religious architecture, a style which marries traditional Bolivian with colonial Spanish influences. The tower offers one of the best views of the city and we were the only people up there. Not bad for B$5 (about £0.50). 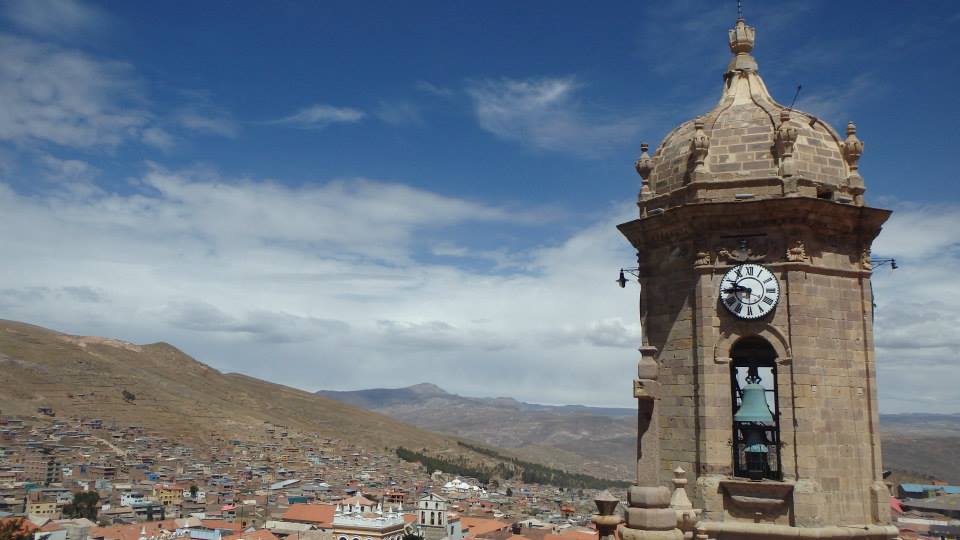 For another breathtaking view of the city you can also visit the bell tower in the city Cathedral. This is a fairly similar view of the city so you do not need to do both, however if you are interested in the Cathedral itself, the tour was pretty entertaining! 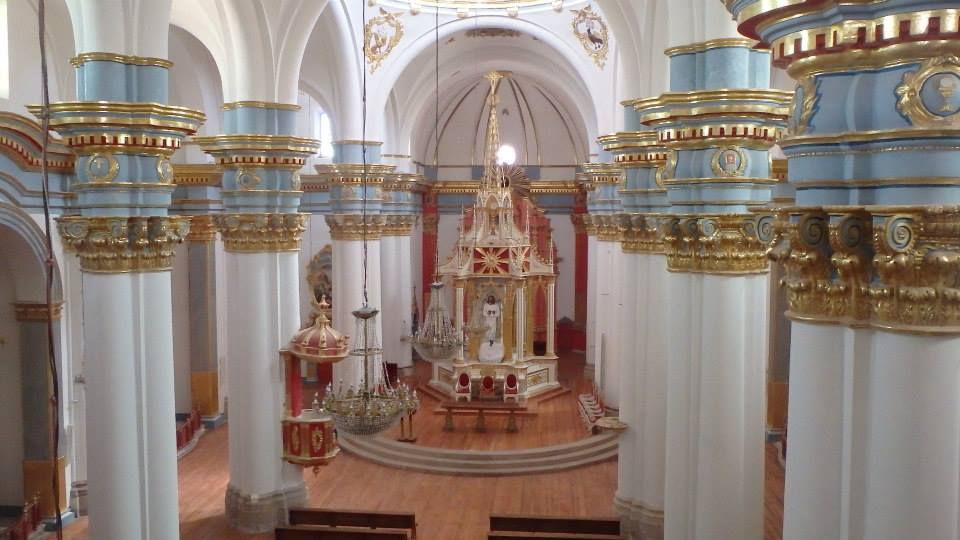 For the B$15 entrance fee you get to enter the Cathedral, have a free tour and can take photos. Our tour was by a man named Alfredo who was very charismatic and entertaining. He explained the history behind the Cathedral in Spanglish and high fived us everytime we got the answers to his questions right. The Cathedral is painted in vibrant colours (which were restored after they found reminents of the original pigment) and is decorated with stain glass windows from Murano, Italy. 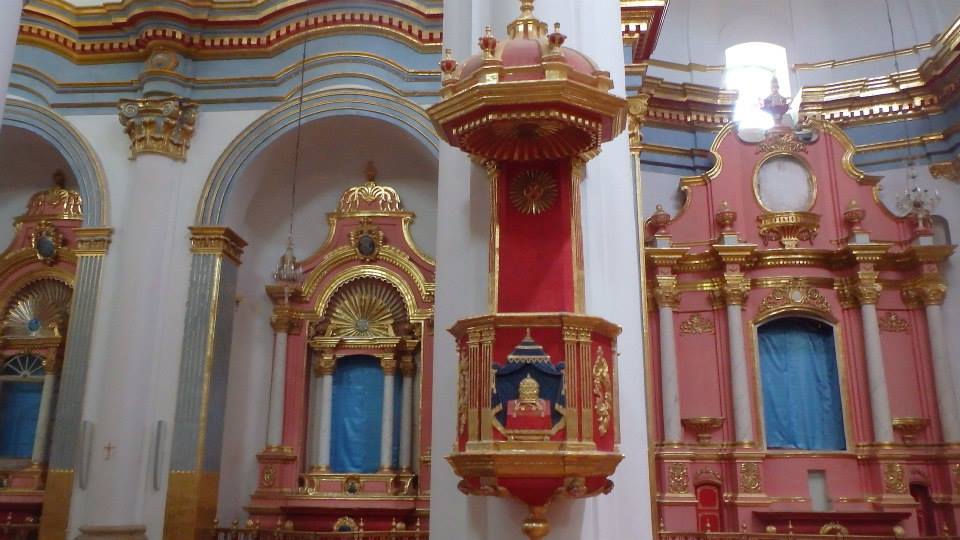 We enjoyed Potosi as our first real experience of life in Bolivia and would definietly recommend it as a place to soak up some authentic Bolivian food and culture and to understand about the history of those who suffered there. We chose not to go on a mining tour but if you feel the need to they run daily at 9am.