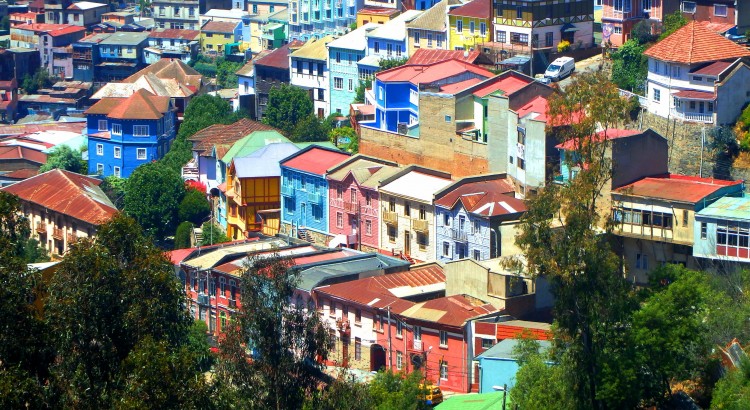 Valparaiso goes by a number of names; ‘Little San Francisco’, ‘The Jewel of the Pacific’ and, more recently, the official Cultural Capital of Chile. There’s a surprising amount to do in this quirky little town and we loved it so much we decided to put together a Valparaiso city guide.

‘Valparaíso, how absurd you are…you haven’t combed your hair, you’ve never had time to get dressed, life has always surprised you.‘ Pablo Naruda.

Skip to a section:

The best way to access Valparaiso and the nearby Viña del Mar is from Santiago, which is just 120 km away. We found that the easiest way was to head directly from the airport in Santiago to Valparaiso. It takes about 3 hours and costs around C$3,350. You can read detailed directions here: Santiago Airport to Valparaiso.

The directions are much the same from within the city; head to the nearest terminal and scout the cheapest direct tickets to Valparaiso.

The city’s Micros (so called because they are small buses) are public buses run by Transporte Metropolitano Valparaíso. A single journey within the city costs C$300-350 and they get a little more expensive when you head into the hills. Be warned though, the drivers are paid per passenger rather than salaried so they tend to cram the bus full and drive erratically.

Cabs are not widely used by locals in Valpairaiso and a result they tend to be quite expensive. You can usually find a cab to hail in the busier parts of town, but it is likely to be the most expensive way of getting around.

A collectivo is essentially a taxi which runs a fixed bus route. In Valparaiso the collectivos are black with yellow roofs, making them easy to spot. The pricing system can be quite complex as it depends on which zones you pass through, but a journey  is usually between C$500 – C$800 and there tends to be more space than on the bus.

If you’re visiting Valparaiso, chances are you have heard of the steep funicular railways / elevators which run up the side of many of the cerros, or hills.  Not only are the views fantastic, but the creaky wooden ascensors can also save you a lot of time and sweat walking up flights of concrete stairs. Some of the ascensors are privately owned and others publicly owned, so the price varies accordingly, but you shouldn’t have to pay more than C$300 per journey. The ascensors were built between 1883 and 1915 and the longest one is 175 meters. We travelled on quite a few to access the different areas around the city. 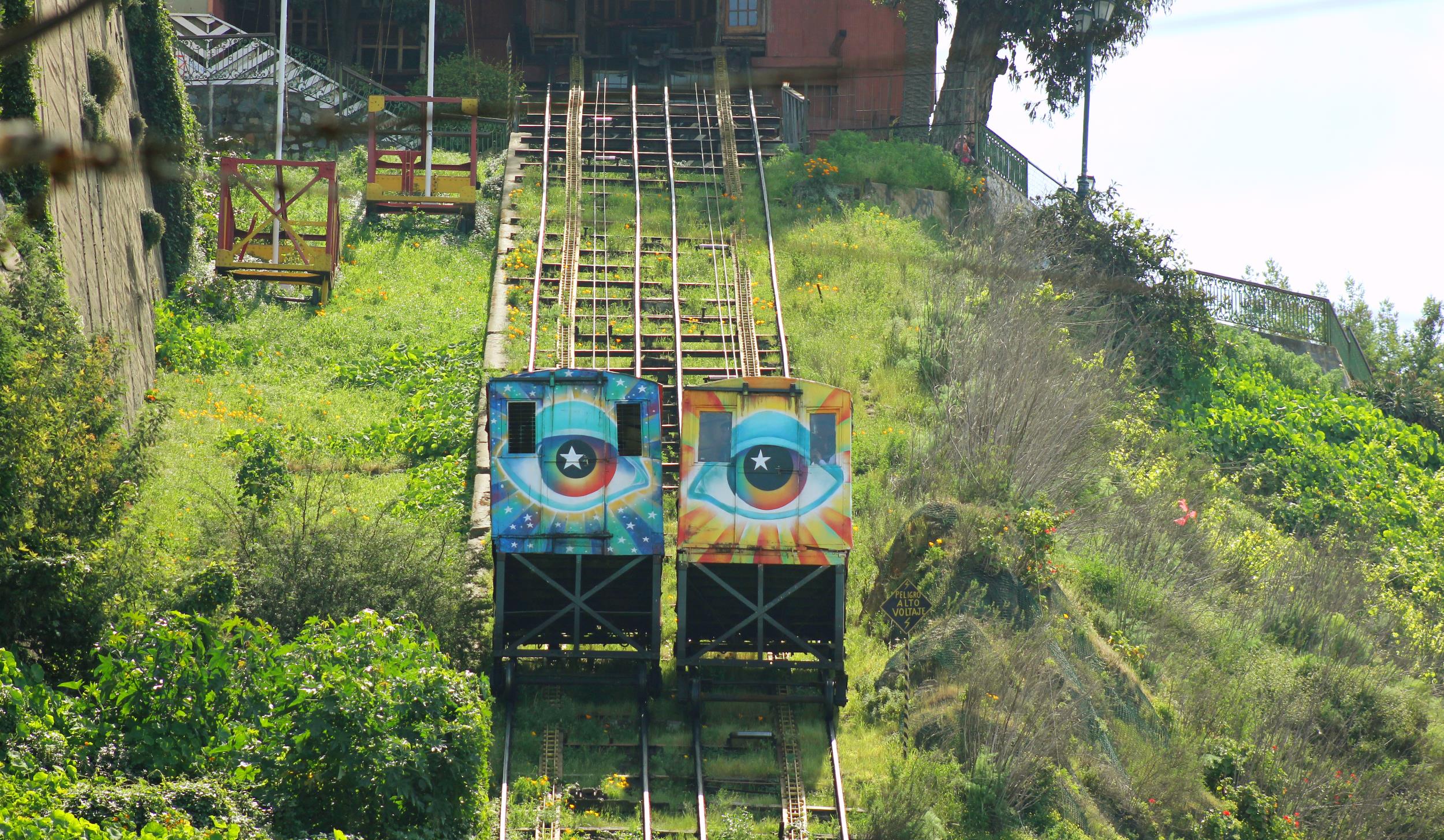 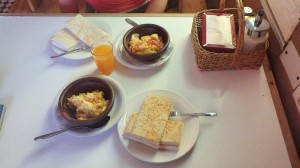 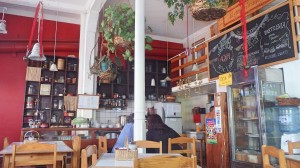 If you’re suffering from a serious hang over or just want to start your day off right, head to El Desayundador. They only serve breakfast so they do it well. You can get a decent breakfast from C$4000 – C$6000 or if you’re feeling romantic, why not split a Once Para Dos (Elevensies For Two) for a more substantial breakie (C$8500). 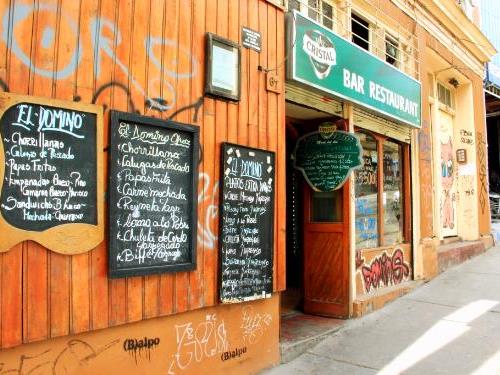 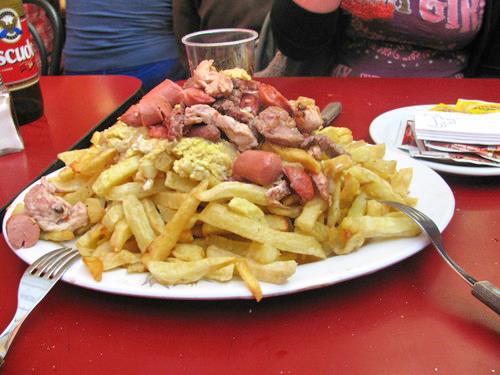 If you’re looking for food on the cheap, you should check out El Domino. This time you will need a friend, as all of the dishes served in this labyrinth of a restaurant are designed for two or more people.  It’s mostly ‘junk food’, but there’s a reason that locals keep going back there! Try the Chilean speciality ‘Churrillana’, a blend of sausage, eggs, chips and special sauce!

Dishes are around C$5,500, not bad when split between two people! 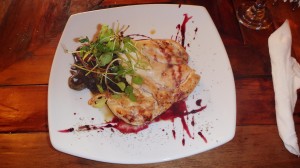 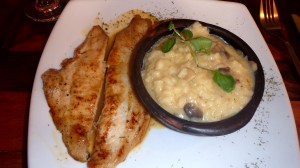 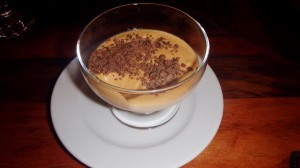 If you’re looking for something a little more upmarket without breaking the bank, Cafe Restaurant Pintor offer a delicious 3 course set menu for a very reasonable C$6,500. The dishes are more modern than the majority of those you’ll find in Latin America and they actually offer a decent desert, pretty rare in Chile! 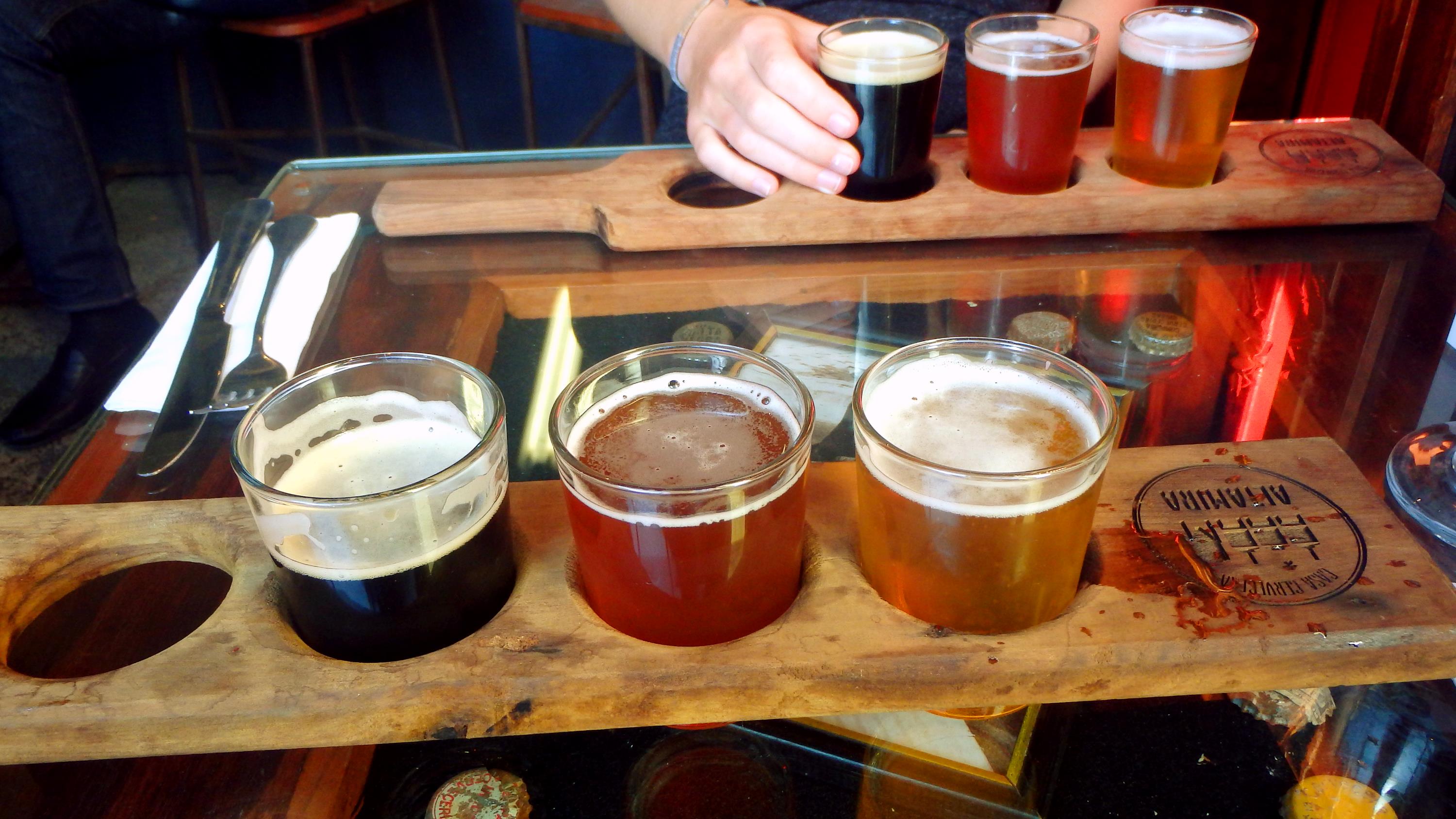 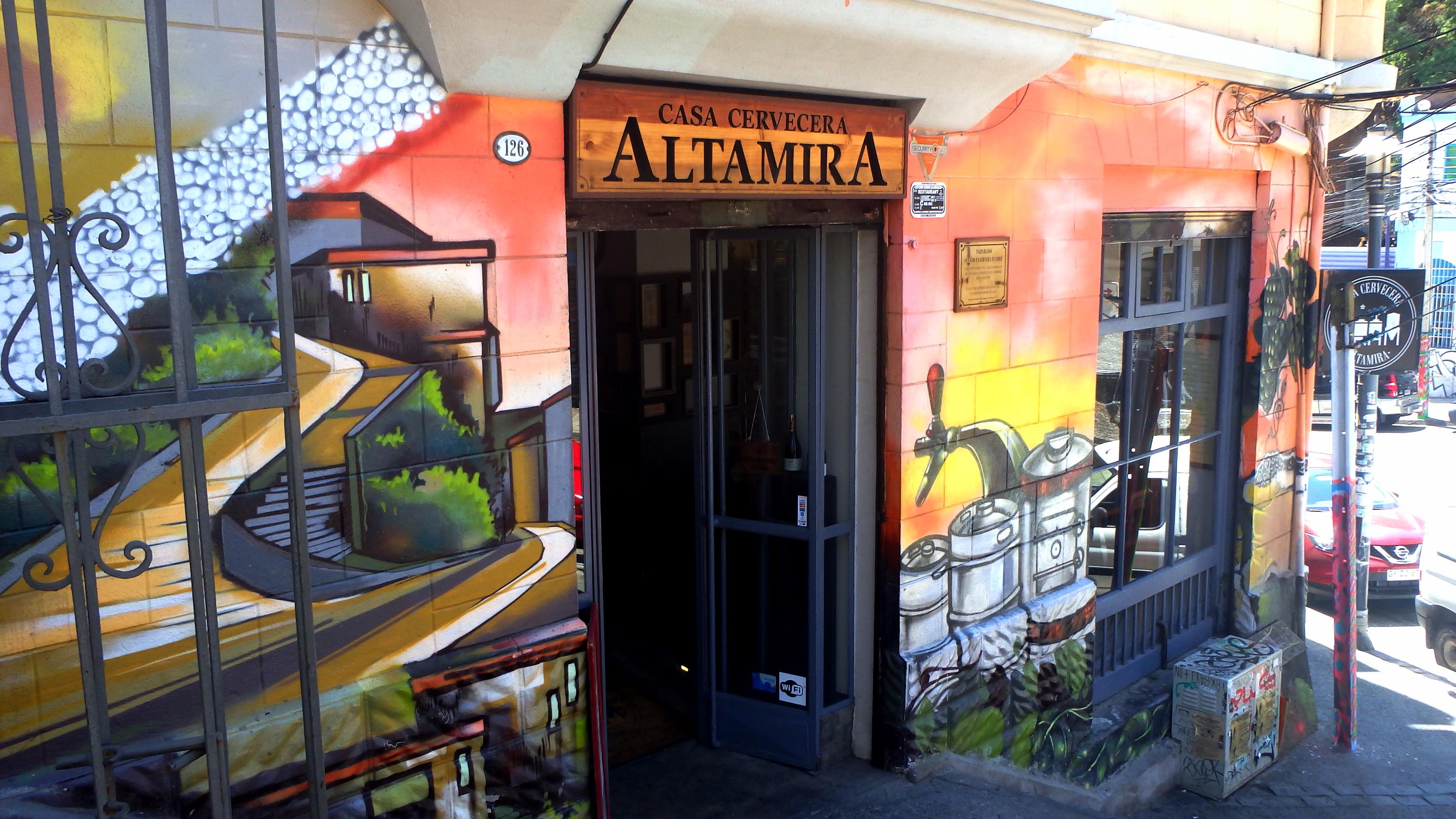 Whether you’re a beer connoisseur or a casual drinker, the Casa Cervezeria Altamira wont leave you disappointed. It’s a cool little bar with seating across two floors and a small outdoor section, there is even an on-site micro-brewery behind the bar.

A good choice is the C$2000 tasting tray. For that you get 4 different beers in tasting sizes (120ml) on a trendy tray; the Cervezas Gourmet include an American pale ale, a Deutsches alt beer, an Irish dry stout and a guest ale. When there is no guest ale being brewed this is reduced to 3 beers for C$1500. They also serve bar snacks and some pub grub. 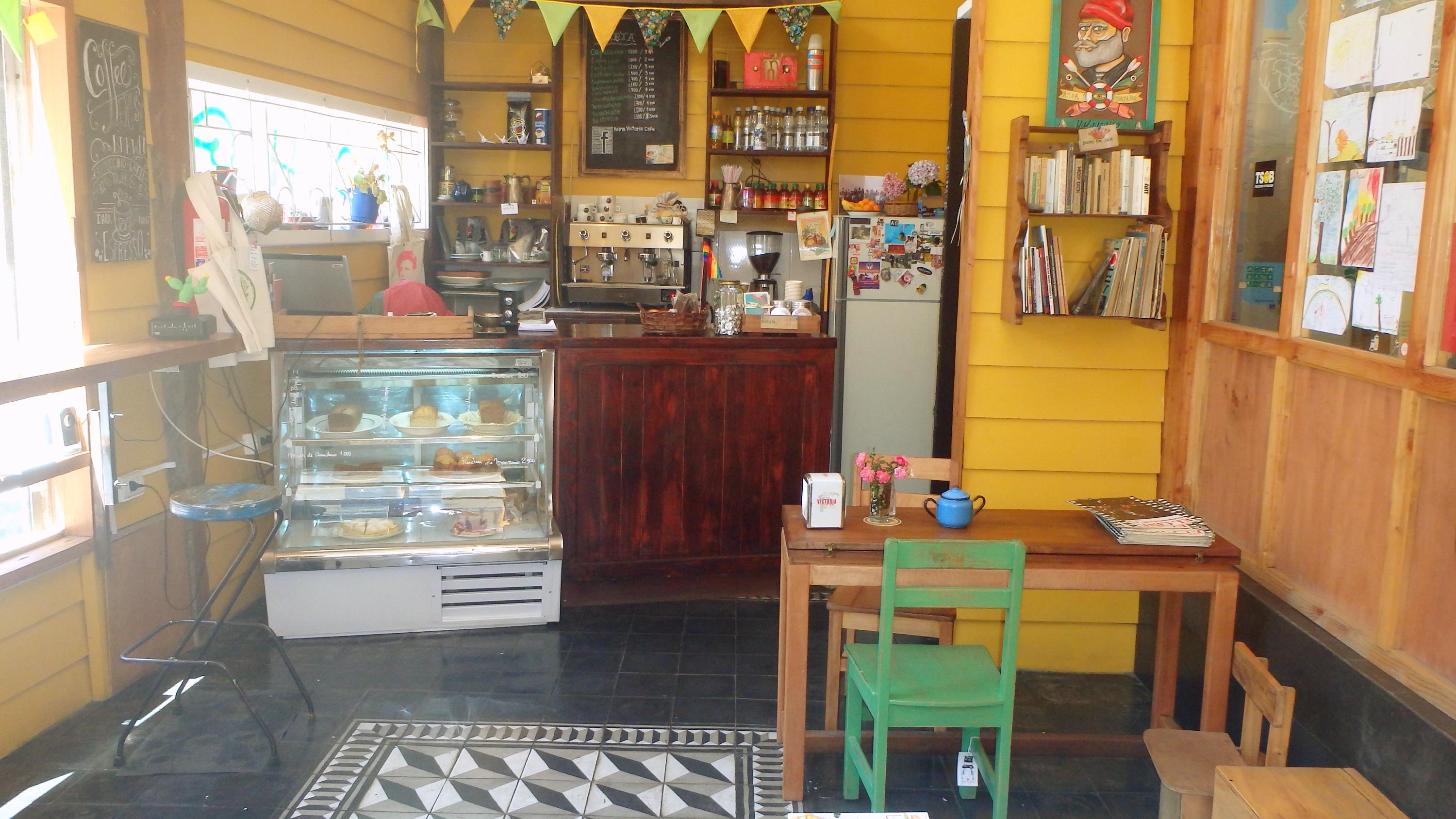 At the very bottom of the Reina Victoria Ascentor (the Queen Vic Funicular Elevator) sits a small but perfectly formed coffee shop, directly opposite the Altamira Cervezeria. They espress a delicious cup of coffee using premium beans, the likes of which are usually reserved for export. The prices are pretty decent and they serve a range of cakes and pastries. 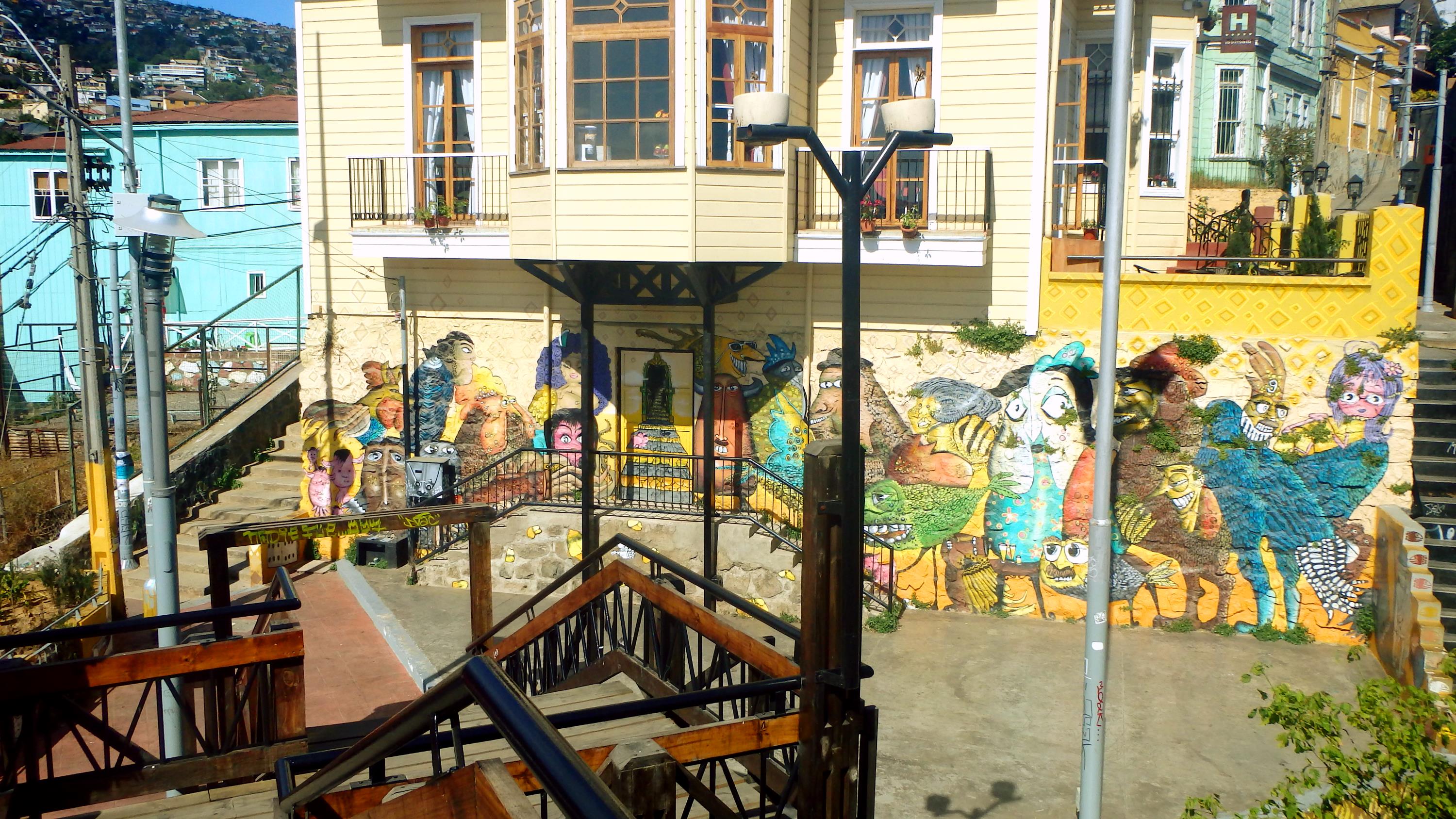 Cerro Concepcion is probably the most popular for tourists and you can understand why. Accessed via Acensor Conception or Acensor Reina Victoria it is full of colourful graffiti and painted staircases. You can get lost exploring the alleyways and quirky stores and bars here.

The murals were forbidden under the dictatorship so, naturally, after the government was overthrown murals blossomed as a symbol of rebellion and freedom. Most of the work is done high up in the cerros as it is harder for the police to get to it and catch the artists. The city now openly enourages murals around the city (as with Bogota’s street art scene), which certainly adds to its charm and character. 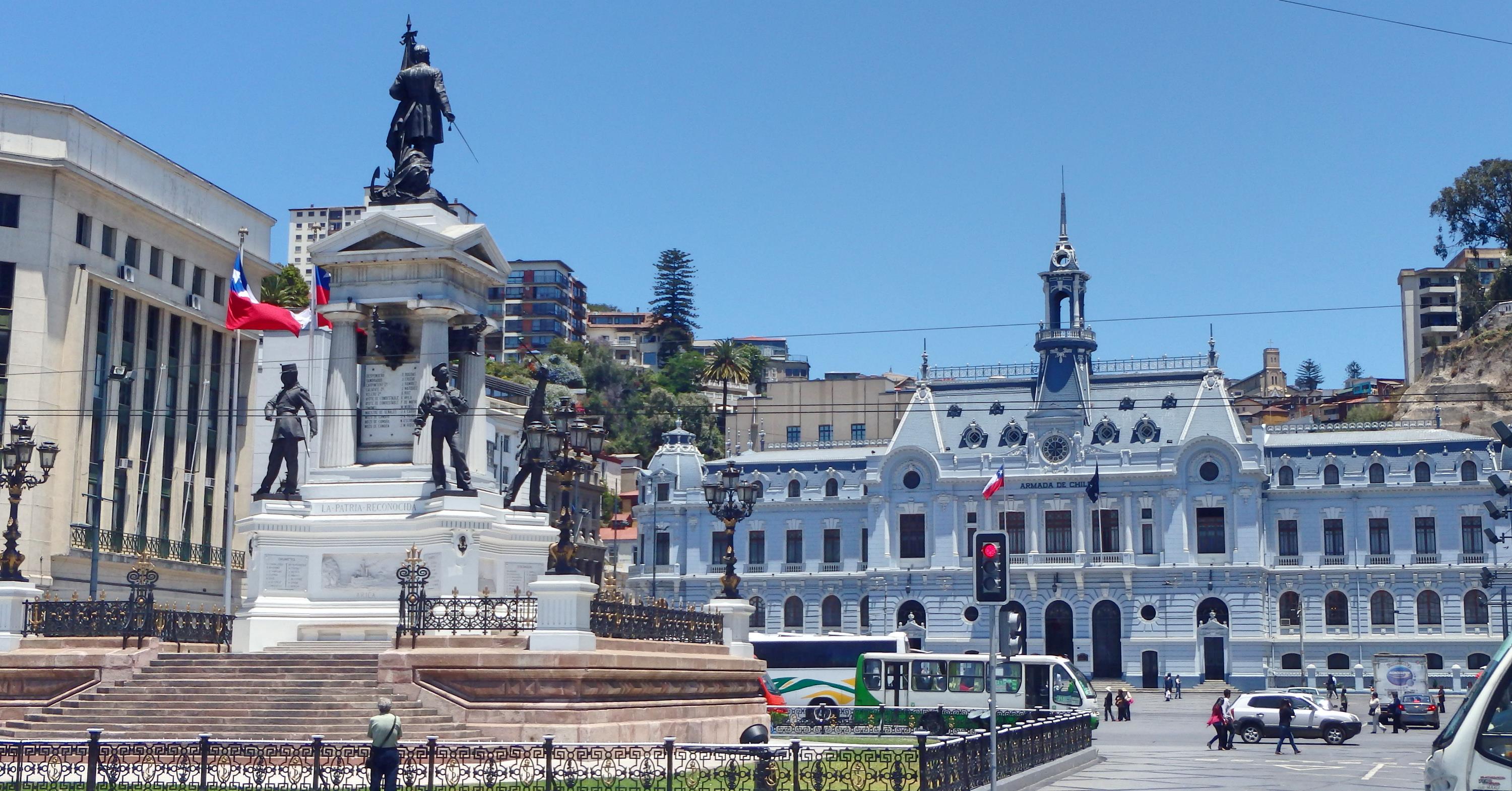 Plaza Sotomayor is the main CBD in Valparaiso and home to many government and navy buildings, as well as war monument built in 1886. Here is where you can attend the free walking tour ‘Tours 4 Tips’ which we highly recommend.

You can also see the port from here, which is a nice way to spend a few hours watching the ships and cruise liners come and go. 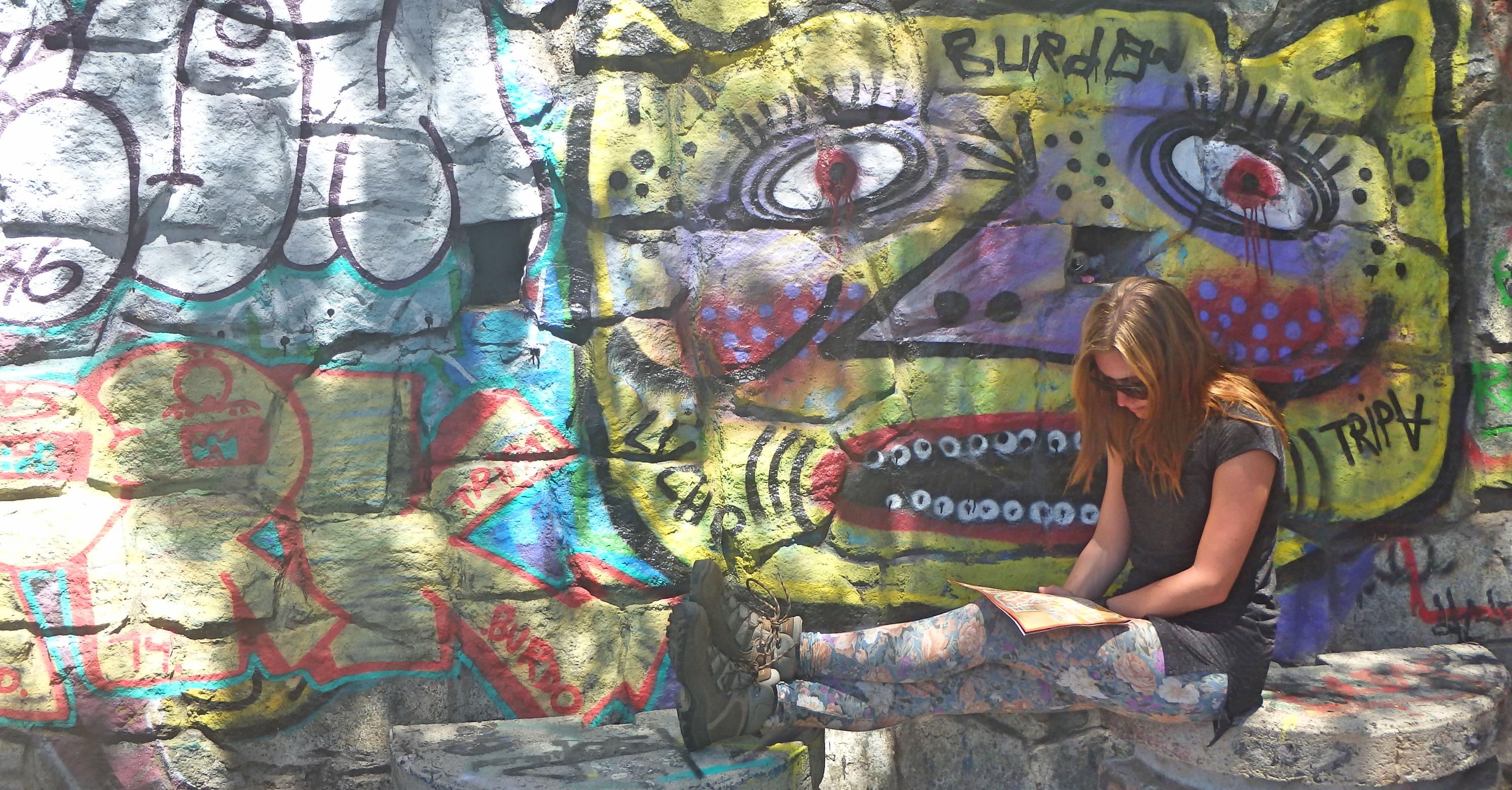 Another popular area for tourists in the city. Here you can find the Museo a Cielo Abierto translated as ‘open air museum’. This is basically a graffiti tour in which murals are signposted stating their age and the artist. We didn’t find the graffiti all that impressive here but Bellavista itself is a wonderful area to walk around and it offers views from the other side of the city.

From here you can also head to the Pablo Neruda Museum, just a ten minute walk further away from the city.

This cerro is similar to Cerro Conception and the two weave into one another. Here you find more upmarket restaurants, a beautiful colourful staircase and a couple of churches. 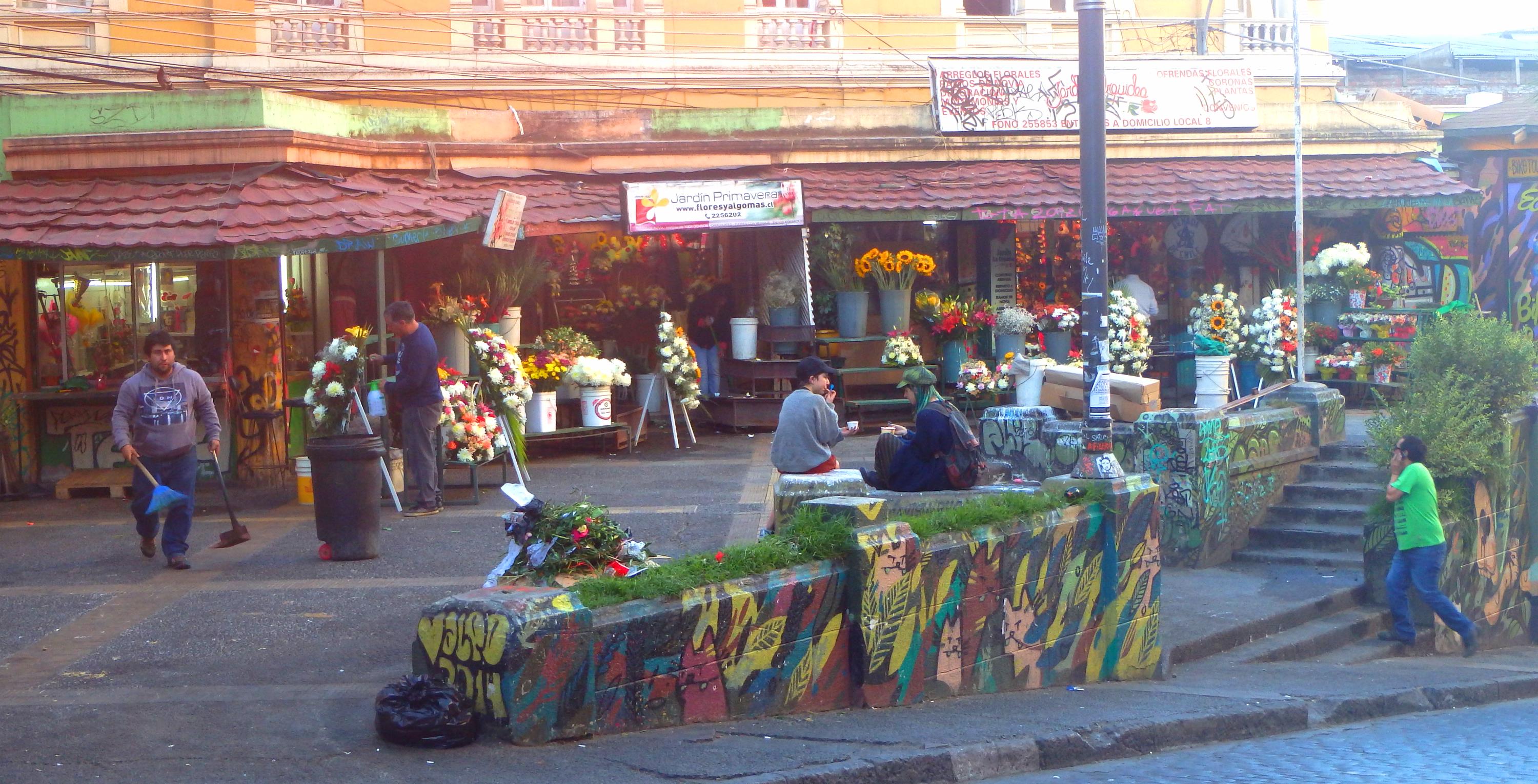 This plaza is the perfect place for a coffee, ice cream and/or cake. There are lots of people sitting outside having a drink every night of the week which makes it bustling but not too loud or crowded. 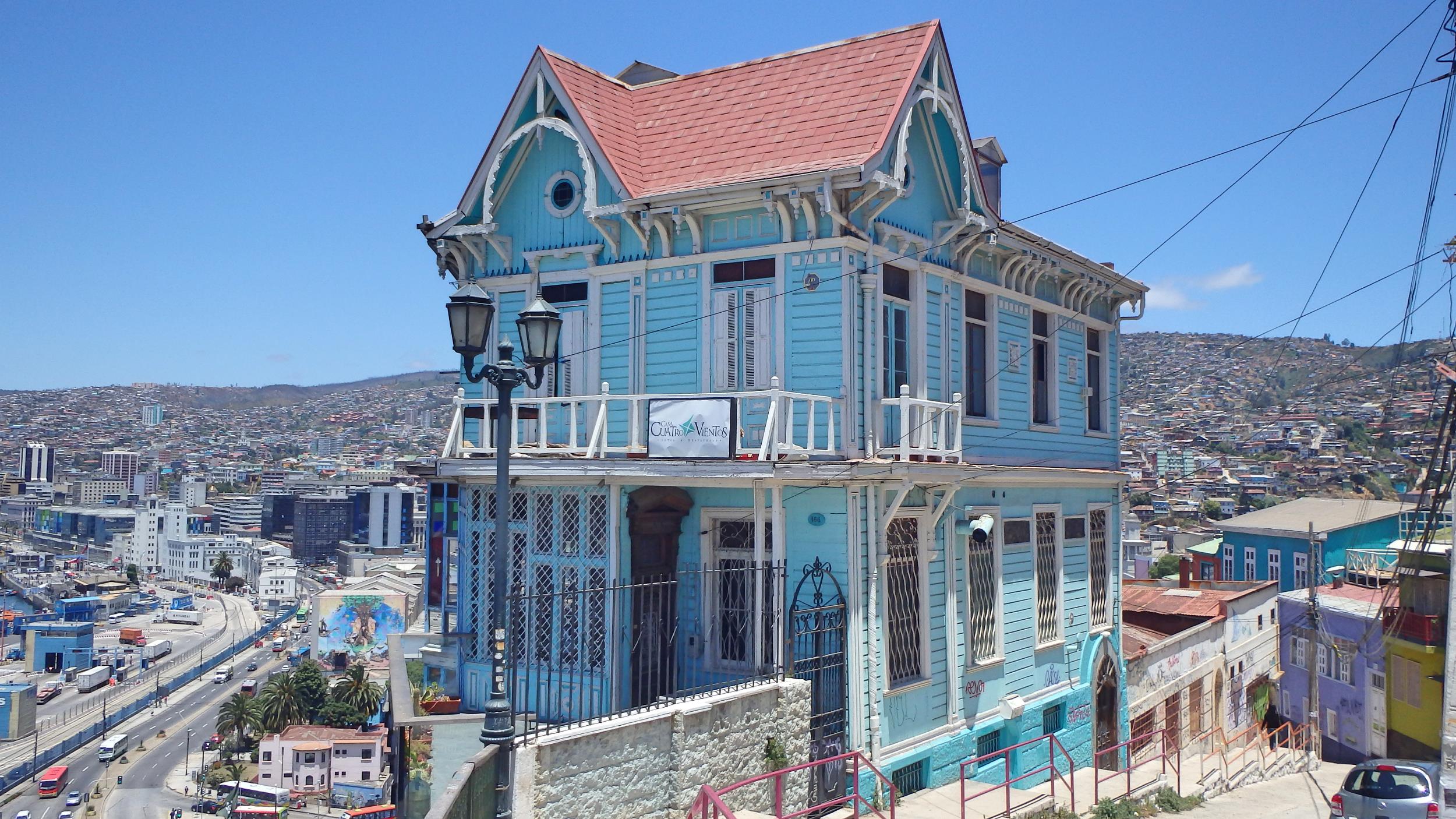 Another great spot, on another cerro, for watching the port and is also home to the naval museum for those interested. Don’t linger too far from the main touristy area here as there isn’t much to see and you can easily get lost.