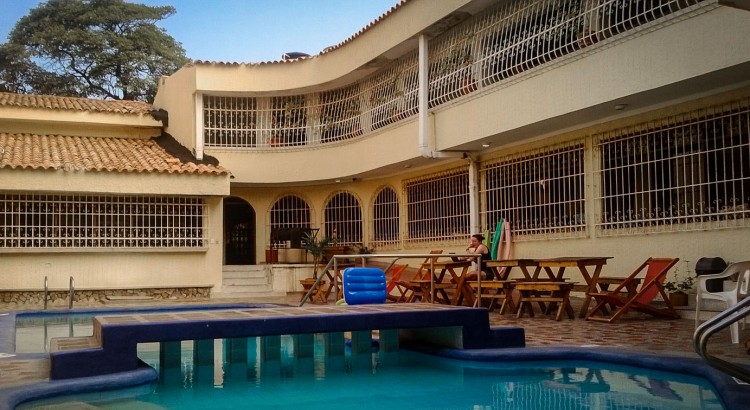 Our time in Colombia’s coastal town of Santa Marta was mainly spent lying by a pool in our hostel. Unusual for us, yes, but after 3.5 months of constant travelling at a faster than average pace we were ahead of schedule and owed some rest time before our next flight.

Santa Marta is very much a gateway to many of the nearby attractions. It is the main base town for visitors heading to Tayrona National Park and/or the Lost City. During our extended stay here we saw the same people leave and come back in between their various trips.

Feeling slightly guilty, we transformed from authentic backpackers into holiday goers and ate western food, caught up on blogging and suntanned. Although on the surface it may have just seemed like we were lounging around not taking in any culture, the reality couldn’t have been more different. We weren’t staying at some all inclusive hotel or even your average hostel, we were at Drop Bear Hostel, which used to be home to a local Colombian cartel.

The mansion was built in the 1970’s when the drugs trade in Colombia still mostly revolved around marijuana. Based in Santa Marta on the Caribbean coast, the cartel made their money moving contraband (usually whiskey) as well as shifting drugs to the US via Jamaica. It wasn’t until the 1980’s when cocaine came onto the scene.

It was quite unusual but fascinating to stay in this hostel, knowing that it was once home to one of the country’s notorious crime families. The descendants of the cartel still live locally and have forbidden the hostel to mention their names or use their family history as part of the its marketing. Although, as you start to hear stories and read certain documents it becomes obvious who they are.

Even notorious and reviled crime lord Pablo Escobar was said to have come here and stayed in its secret safe house. It was allegedly one of his hiding places whilst he was on the run from drug enforcement agencies.

We were privileged enough to get a tour from Gabriel, the Sydney born owner of the hostel, who gave us a thorough and honest explanation of the hostels past life. He told us some terrible stories of what had happened there and also showed us secret hiding places that he had found by knocking through the walls. There are still 10 secret so-called caletas (hiding places) all over the Drop Bear mansion. Only a few have been opened so far, though they are all expected to be empty. Gabriel has given up on finding anything but he says if he suddenly disappears one day we will know why!

The house also used to have a hidden safehouse area, an underground whiskey storage cellar, and even two secret escape tunnels. We saw one of the tunnels hidden underneath a wardrobe in our dorm room that has been covered up.

In the courtyard above the swimming pool you can still see the pedestal on which a giant satellite dish used to sit. The cartel used this to communicate with compatriots inland or their smuggling network in Jamaica and the US. Gabriel had kept this as decoration until a strong storm blew it over. The platform is now used as a hammock retreat!

After several stories about the drug trade and being told about the hostels history from 1970- the present day we headed to the bar (to get a drink in hand) for the next part of the tour: Ghost Stories. This part of the tour moved me just as much as the first. Without giving too much detail about Gabriel’s life we chatted about how the building was home to a lot of bad karma, which affected him personally. We spoke about witch doctors and how this was ‘cured’.

We were even told an awful story about a ghost that many backpackers have seen (without previously knowing any stories). A young girl was said to have drowned in the swimming pool and her ghost haunts the garage where she was taken when finally found. The people partying around the pool were too ‘distracted‘ to notice she had fallen in. Being at Drop Bear certainly is an experience and I loved being part of the, albeit tragic, history. (Luckily I didn’t see any ghosts).

A Transformation for the Better

What is now a homely backpacker hostel was once part of Colombia’s shadowy past. It definitely demonstrates how the country has changed and broken through a lot of the terror which was once daily life in Santa Marta. Staying here made it easier to picture how life was in Colombia’s recent past and helps to educate tourists about the country. The tour was fantastic and I hope people continue to educate tourists on the tragedies associated with drugs. We thoroughly enjoyed our stay at this unique and friendly hostel…We also got a free hammock and vest tops for hanging around for so long. Thank you Drop Bear!

2 thoughts on “Our Stay in an Ex-Cartel Mansion in Santa Marta, Colombia”