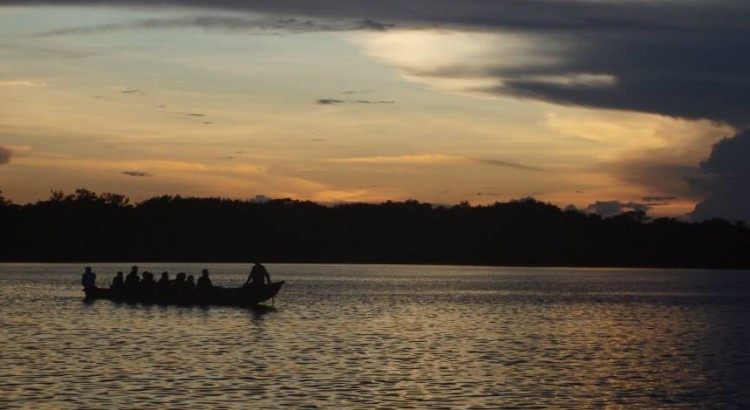 When you think of Amazon Rainforest Brazil springs to mind, right? Rightly so, as 60% of the Amazon is located in Brazil. But the other 40% of the 2.1 million square miles of rainforest sprawls across another 8 Latin American nations, one of which being Ecuador, which is where we spent an incredible four days.

The Cuyabeno Wildlife Reserve, the area we were visiting, is submerged in water during the rainy season turning the rainforest into flood forest. The reserve is made up of lowland tropical rainforest encompassing a labyrinth of lakes, rivers and lagoons. This makes for a more diverse trip as you can spend time in the jungle on foot and serpentining between trees and ducking under low-hanging branches in a small canoe.

It is also argued that Cuyabeno is one of the better reserves for spotting wildlife as in most Amazonian regions there almost no navigable narrow rivers, meaning you are too far away from either shore to get a good view. In Cuyabeno, however, the experience is much more intimate and even when on the river you still feel a part of the jungle.  Slap on some bug spray and get going!

The tour starts from Lago Agrio and most visitors make their way there from Quito. We were heading to Quito next though so we caught the bus from Bangin’ Baños (with a 2am transfer in Coca, thanks to all the direct buses being full because of a public holiday) arriving in Lago Agrio at around 7am.

From there we took a pubic bus (sweaty and uncomfortable, but included in the price of the tour) to El Puente, which marks the entrance to the park.  From here it was into a canoe (a long motor-boat, in truth) for the next two hour leg of the journey; we traveled downstream in the Aguarico river and then upstream on the Cyabeno Blackwater river into the jungle for the start of our Amazonian adventure. The rain forest lived up to its name for the first few hours … 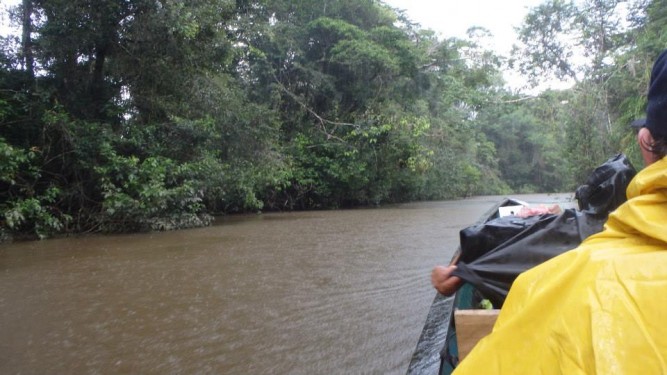 After lunch and a short time relaxing in the lodge’s hammocks it was off to Laguna Grande for sunset. As the sun begins to set the trees cast an eerie shadow across the still, black waters. You can see why this part of the world has a reputation for being mystical. 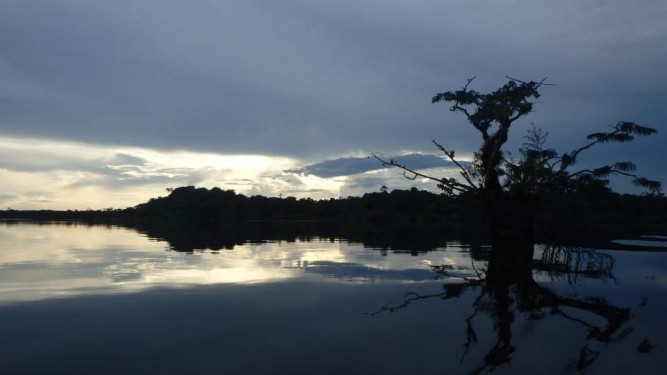 After a long, sweaty day we were glad to be able to cool off by jumping in. The guide re-assured us that we were swimming above the deepest section of the lagoon (5m) to minimise the chance of a curious piranha or barracuda being around to try a nibble of our thigh. Luckily the water was too murky-brown for us to see if he was right. 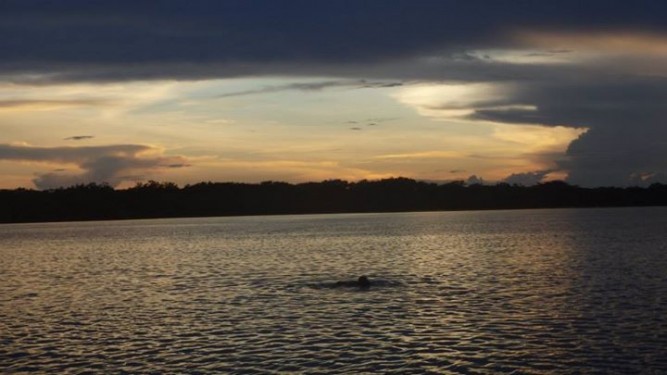 We dried off and headed back to camp. The lodge was fairly quiet owing to it being low season, so we had a private room with our very own double bed with a mosquito net!

After a large, traditional breakfast (eggs, rice and fried plantain) we donned our trousers and long-sleeve shirts to set off trekking in the primary rainforest. We were each given a pair of wellies – I was extra lucky as my pair had a red ant nest inside one, as I found out once I pushed my foot inside. Thick socks to the rescue.

In typical Latin American fashion the safety briefing wasn’t overly thorough; it was something along the lines of “don’t put your hand down without checking what’s under it” and “if it’s black and hairy it’s probably poisonous so call me”. 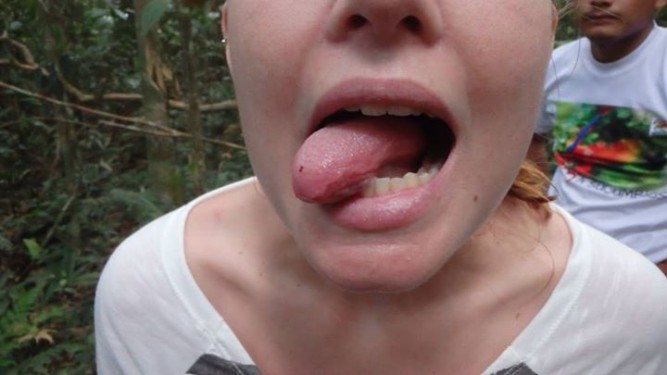 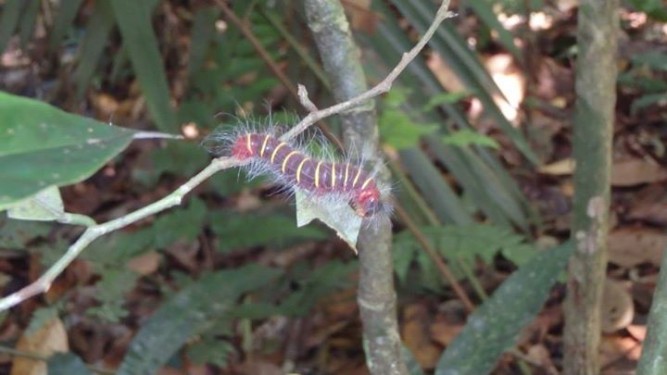 Not black, so maybe it wont kill me. 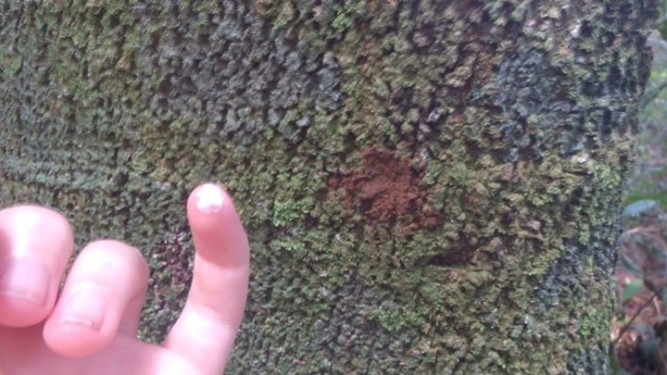 Medicinal tree, can prevent Malaria. Could have saved a fortune on Doxycycline.

The weather was fairly cool for our jungle trek meaning that we weren’t able to spot any anacondas, which was unfortunate (depending on who you ask).  The same can be said for tarantulas, although we did manage to peek into a nest and see four pairs of hairy red legs (no, none of them were Sarah’s!).

The rest of the day was spent paddling through smaller lagoons to go bird-watching (the variety of colourful birds is pretty spectacular!) and after dark we strapped on our headlamps and went hunting for Caiman Crocodiles. The only way to spot them is to shine your torch directly at them, which makes the eyes glow a malevolent red.

The third day was one which we were all pretty excited for, it was the day we were to visit an indigenous community living within the Amazon itself.  We were a little disappointed to find that the village wasn’t quite as we expected; around 20 years ago the single community hut and the traditional loincloths had made way for individual family homes and knock-off Adidas tracksuits.

To visit the stereotypical type of Amazon community it would be at least another full day’s travel by boat deeper into the jungle. I would have thought that would be worth the trip, but not included in our tour.

None-the-less, it was enjoyable and insightful to visit a community who’s way of life was so different than our own. We were taught how to make Yuka bread on an open fire and we met a Shaman who demonstrated his healing rituals – they were only demonstrations as for them to be effective, he would need to consume the hallucinogenic plant Ayahuasca which allows him to see into the soul of his patients. 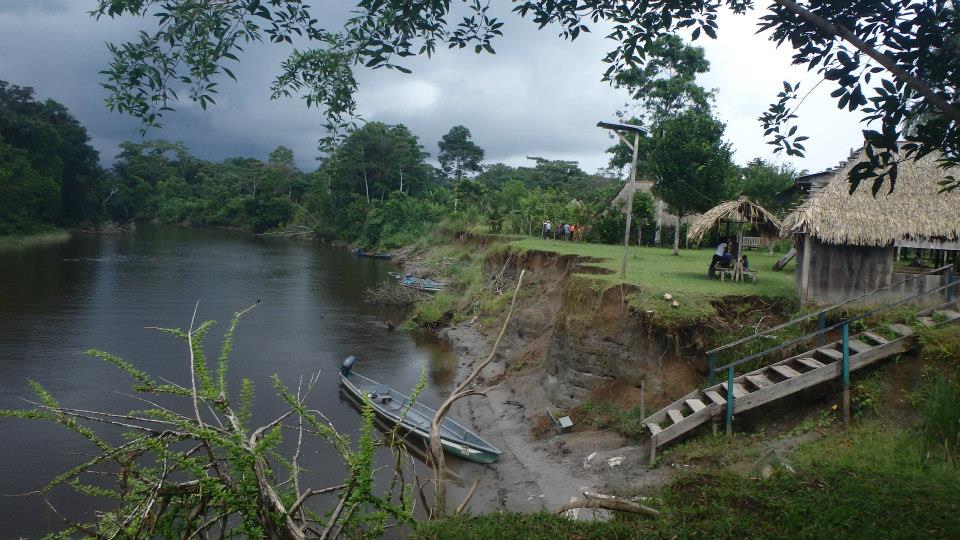 Local community on the river. 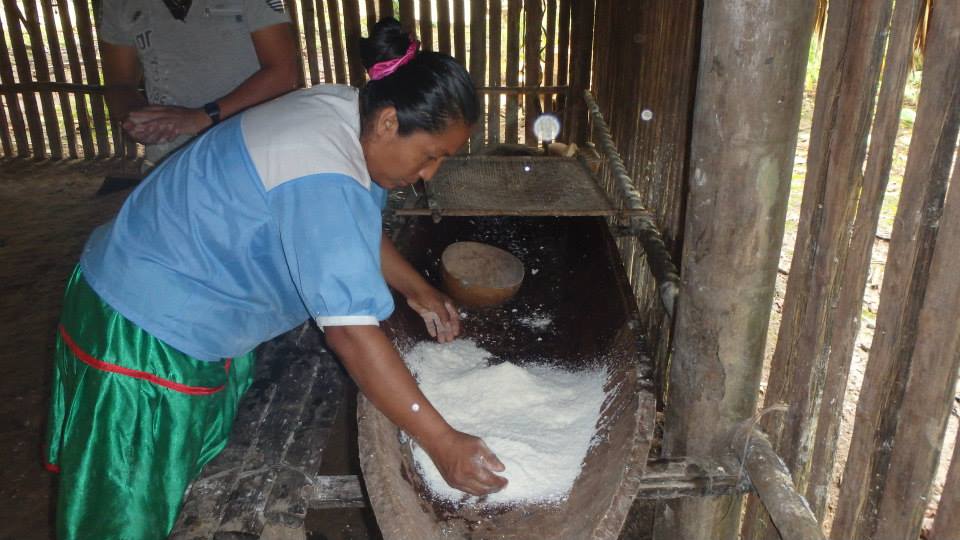 Flour made from grated Yuka plant. 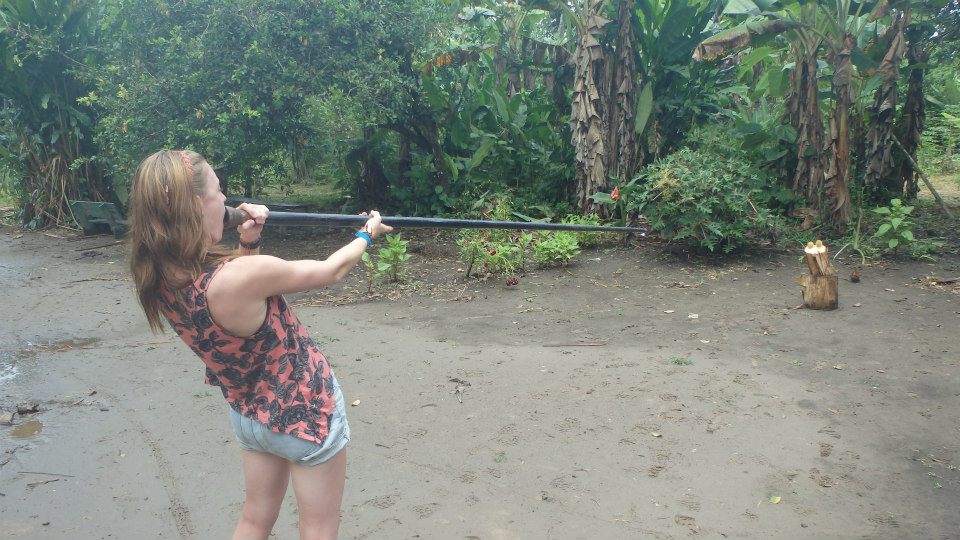 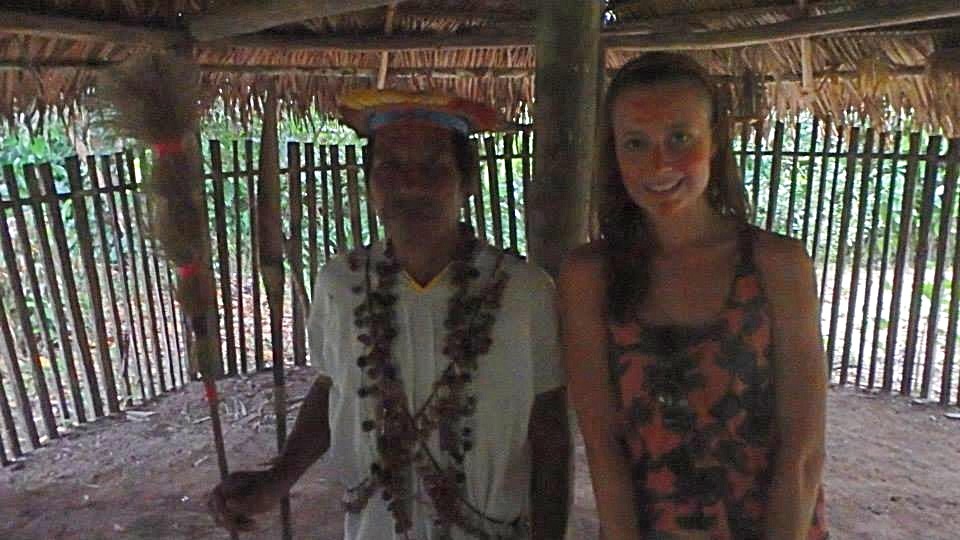 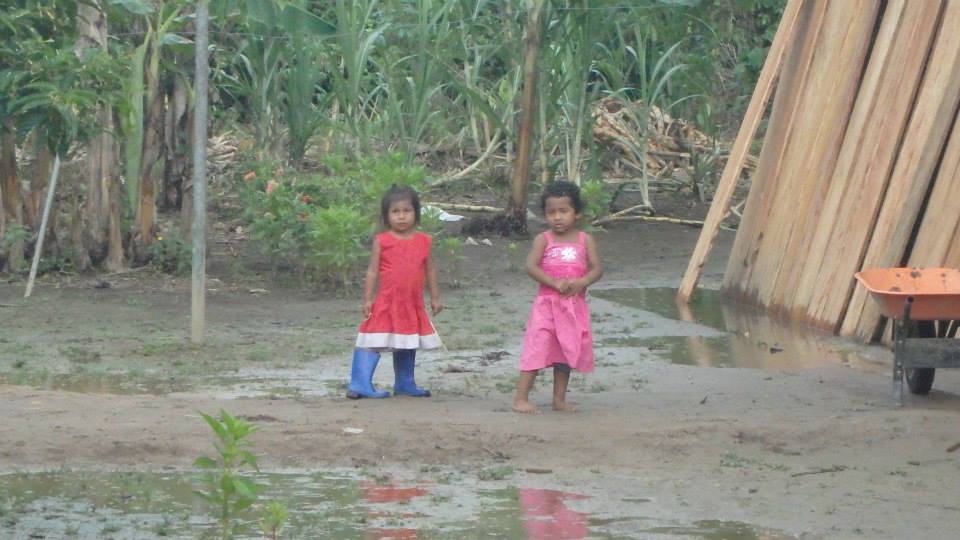 Sunrise doesn’t mean a great deal when it’s heavily overcast. Luckily the tranquility of the water and the “orchestra of birds and insects”, as our guide called it, made the 5am wake-up call completely worth it. 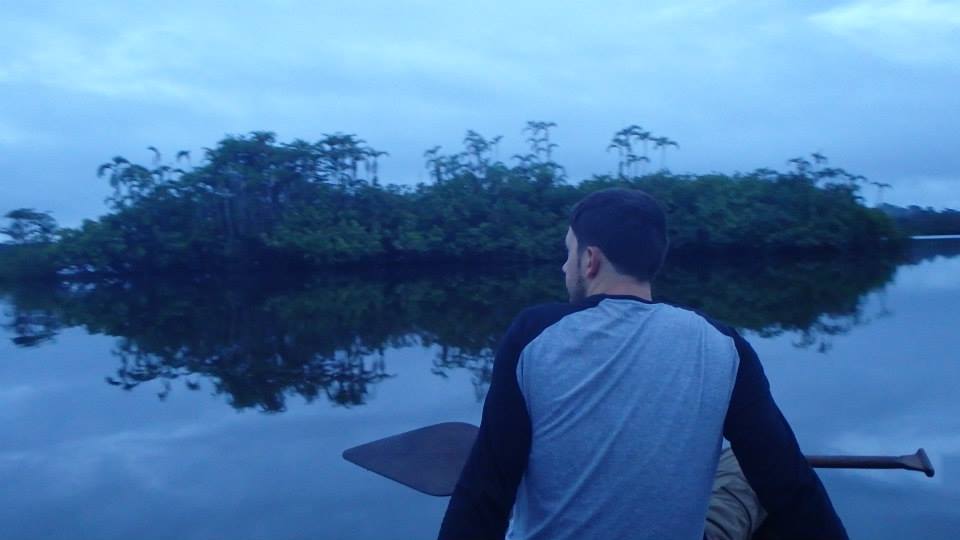 We arrived back at the lodge shortly after dawn to find a troop of cheeky monkeys waiting nearby, hoping to get some free plantain or banana! 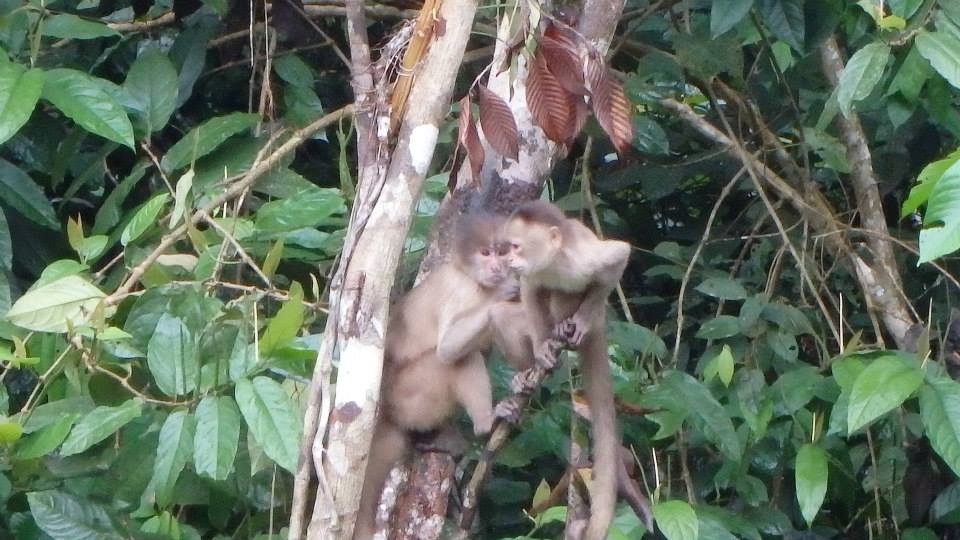 After another large breakfast it was back into the canoe for the two hour journey back out of the jungle, drawing a close to an experience which rated amongst the best of our round-the-world adventures… so far!