Quito is elevated at 2,800 metres above sea level, which makes it the highest official capital city in the World. Quito’s historic centre is one of the largest, least-altered and best-preserved in the Americas and moreover Quito, along with Kraków, were the first World Cultural Heritage Sites declared by UNESCO in 1978. Must be worth a visit, if only for that!

Quito felt like two cities to me. The historic centre is just worlds away from the area we were staying, the Mariscal district, full of bars and drunk tourists. Entering the historic section was a beautiful surprise and it really was not what I was expecting: I’ve heard so many stories about how unsafe the city was but it didn’t feel dangerous to me at all.

The next thing to dispell my pre-conceived image of the city was when our friend DROPPED US$50!! We hadn’t noticed until someone started whistling – I was refusing to turn around because I hate it when men do that, but Paddy did turn around and spotted a woman was running up to our friend with roll of notes tucked descretely in her hand. I never thought I would see the day.

Dispite this near-miss we didn’t have any bad experiences in Quito, but don’t get me wrong, we met people who did get mugged, as they do everywhere in Latin America and the rest of the World… we were just pleasantly surprised with the vibe of the place! 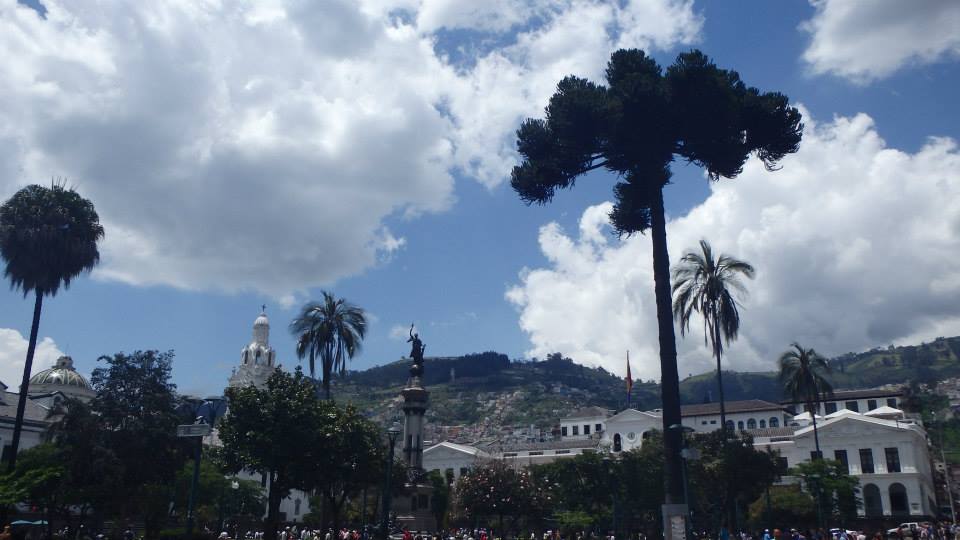 A City at The Middle of the World

The central city of Quito is located about 25 kilometres south of the equator and the city itself extends to within about 1 kilometre of zero latitude. A monument and museum marking the general location of the equator is known locally as La Mitad del Mundo (The Middle of the World), to avoid confusion, as the word ecuador is actually Spanish for equator.

This is one of the main attractions for tourists visiting the city as you can stand with one foot in each hemisphere. The city’s other main draws are that it offers an easy access point to the Galapagos Islands and the Amazon Rainforest. 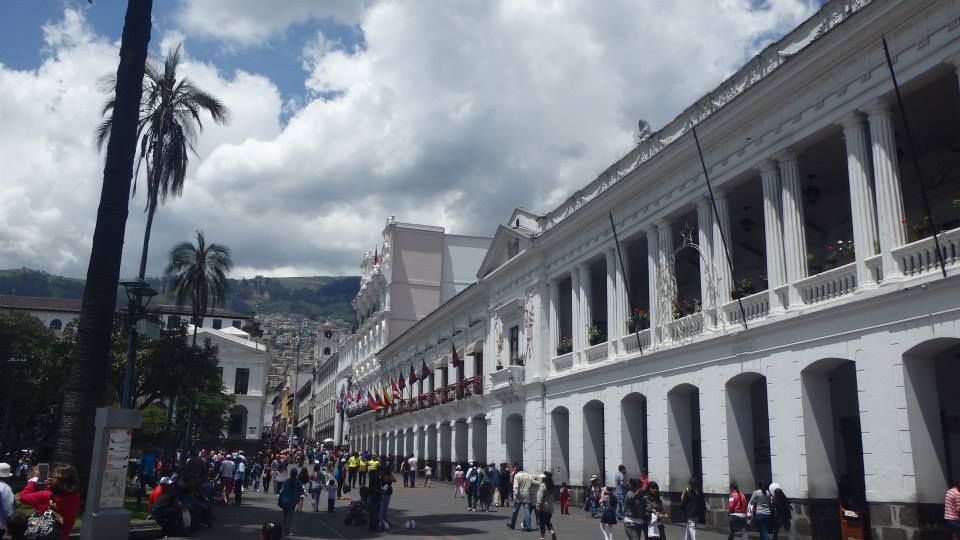 The main historical attractions in the city can be visited during a single day. We simply strolled around for a few hours seeing what we stumbled across, but to save you some time the main attractions are: Carondelet Palace, Basilica del Voto Nacional, Cathedral of Quito, Church of La Compañía de Jesús, Church of San Francisco, Church of El Sagrario and the Church of Santo Domingo. 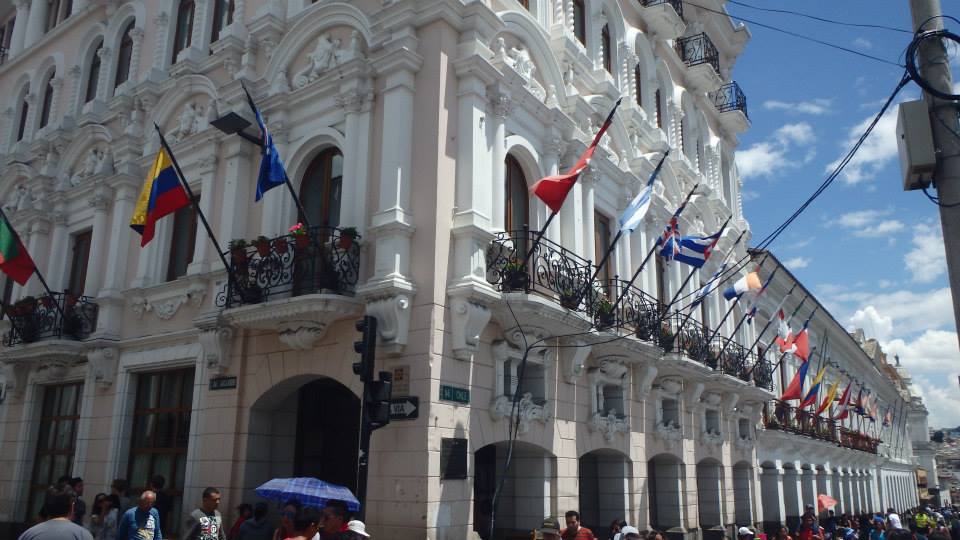 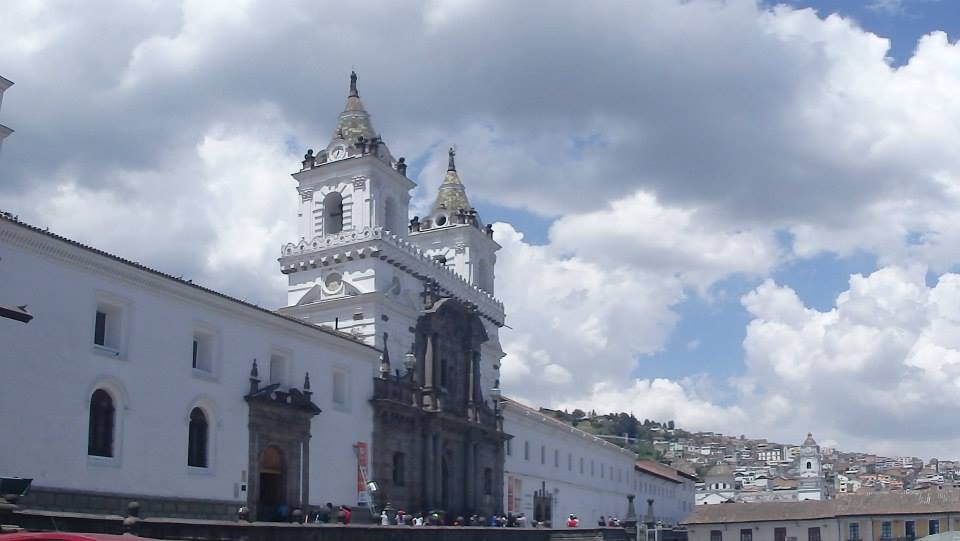 After all those churches we wanted to head to El Panecillo where the beautiful angel figure sits on top of the hill.  She can be seen watching over the people below from almost anywhere in the city. It was a wonderful day with clear skies, but we had heard it was a little dangerous to walk up there alone (as a tourist) so we jumped in a cab. 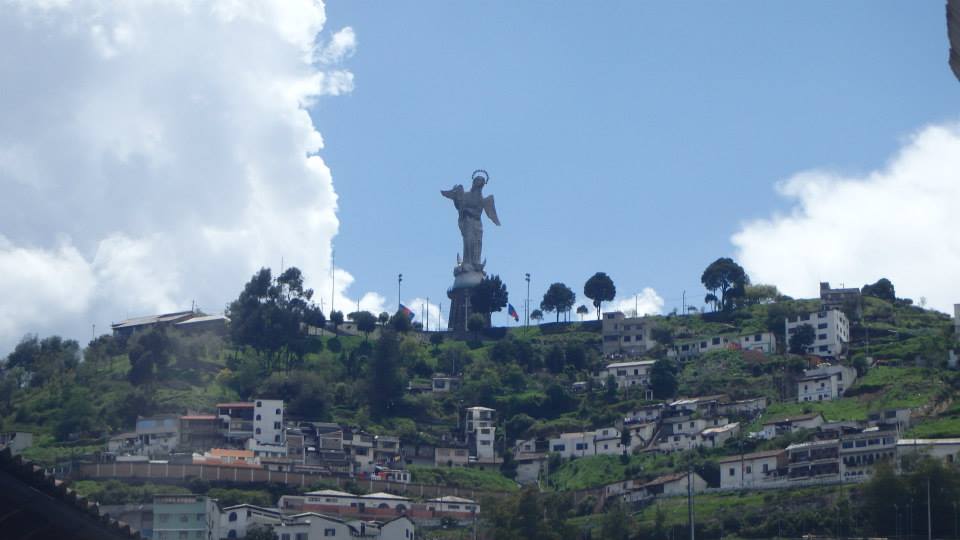 This turned out to be a great idea because the driver agreed to stay with us and show us around the monument and then drop us back into town. We got treated to some local knowledge and didn’t need to wait around for another taxi to take us back. The hill is at an altitude of about 3,016 metres above sea level and the Virgin statue is built on the very top at a height of 41 metres, so the views over the city are fantastic. 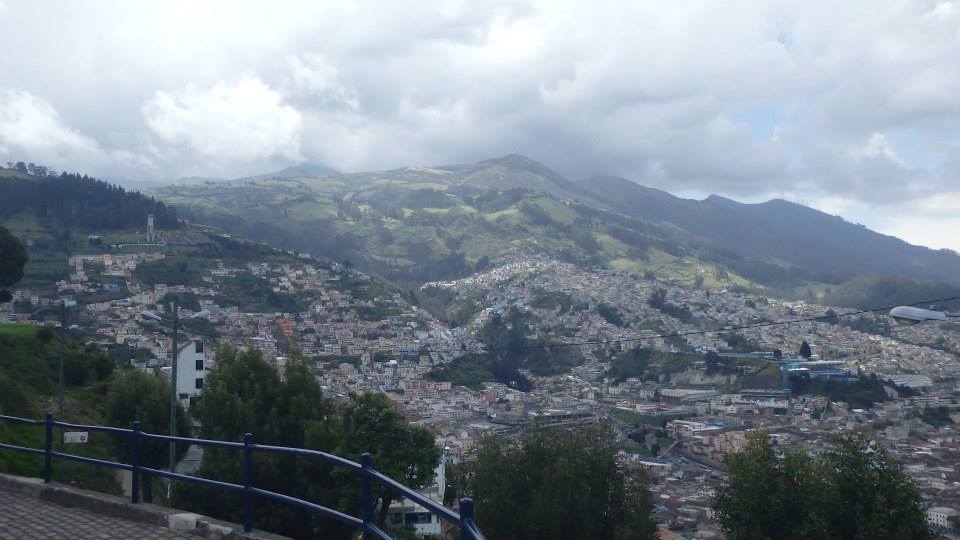 Getting to Mitad del Mundo

Getting to the Middle of the World from Quito yourself is somewhat difficult but it is much much cheaper than doing it as part of an organised tour.

From our hostel we had to walk 30 minutes to a bus stop, catch a bus to Ophelia, and from here take another bus to the museum and got off when other tourists did! 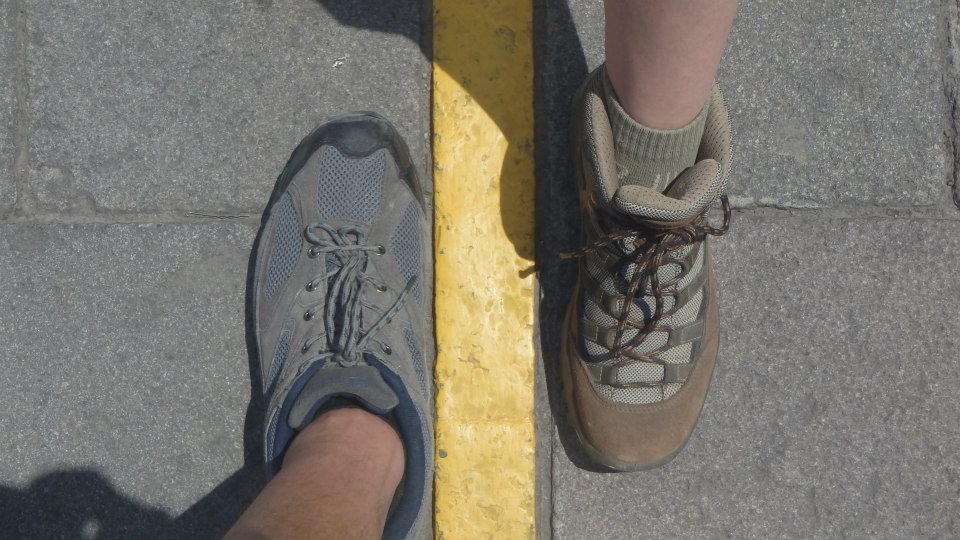 There are two equator lines in Ecuador, the official line and the original line, both only 240 metres apart. The reason for this is that when the monument was built in 1982 it was placed by French scientists without modern GPS measurements – pretty impressive, really! A new line and museum were established when the correct location was found using a military-grade GPS.

We enjoyed the newer museum and correct line a lot more than the monument museum, which is entirely more touristy. 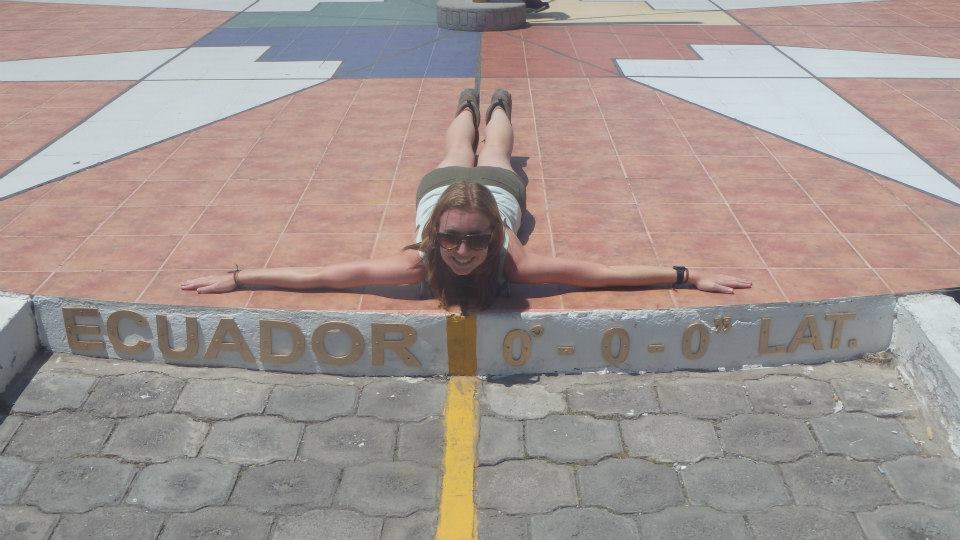 Although the monument is very impressive it felt a bit like Disney World to us, and not in a good way. Inside the park it was full of restaurants and not a lot else. When you know that the line isn’t actually correct it ruins the ambience a little too.  We had to pay the same price as the park entry fee again to climb the moment to the viewing platform, which we felt was very steep (the price, not the climb!). 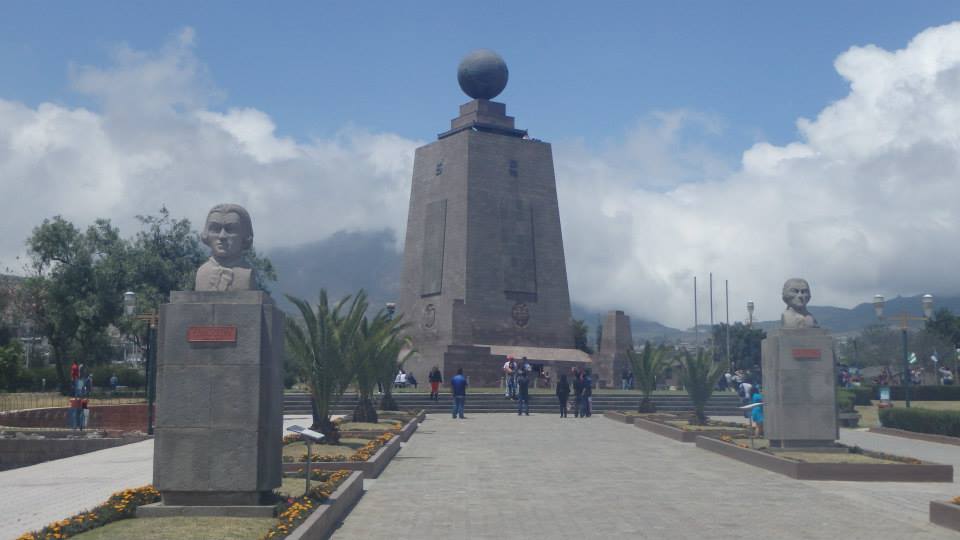 We walked the 5 minutes round the corner to step on the official line. The entrance to the museum is far less grand but as soon as we were inside we knew we would enjoy it more. The entry was cheaper AND it included a guided tour in English. Immediately impressed.

To get there, simply turn left out of the Disney World Park and take the first left, it takes no more than 10 minutes.

The tour was fantastic and started with a lot of historic information about Ecuador and the indigenous tribes therein. Our guide then explained about the history behind the equator line and showed us lots of interesting experiments to demonstrate the effects of gravity in this part of the World. We looked at our shadows and the sun dials and then did some rather dubious experiments with water and eggs which we weren’t too sure were scientifically accurate. 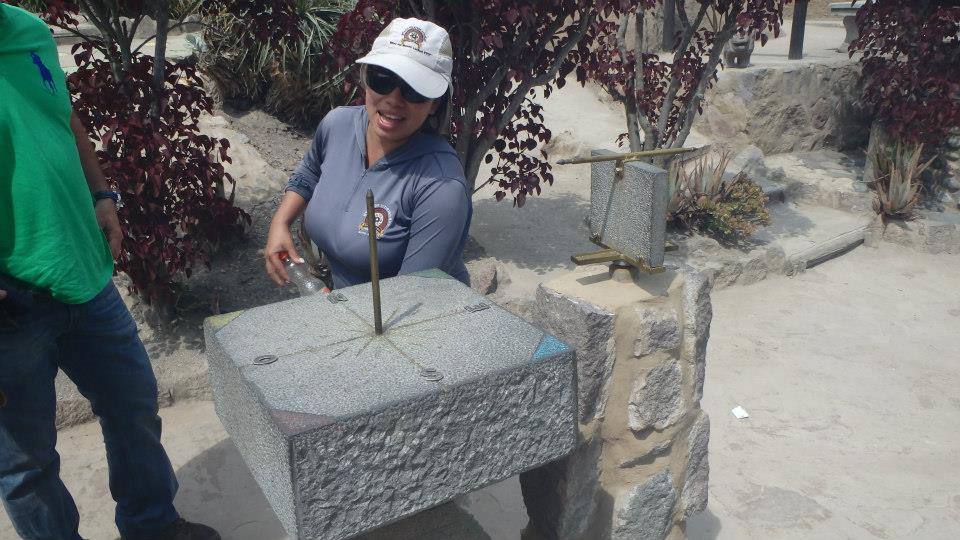 If we had known before we would have definitely just gone to the Inti Ñan Museum and skipped the overpriced Disney World parade next door. 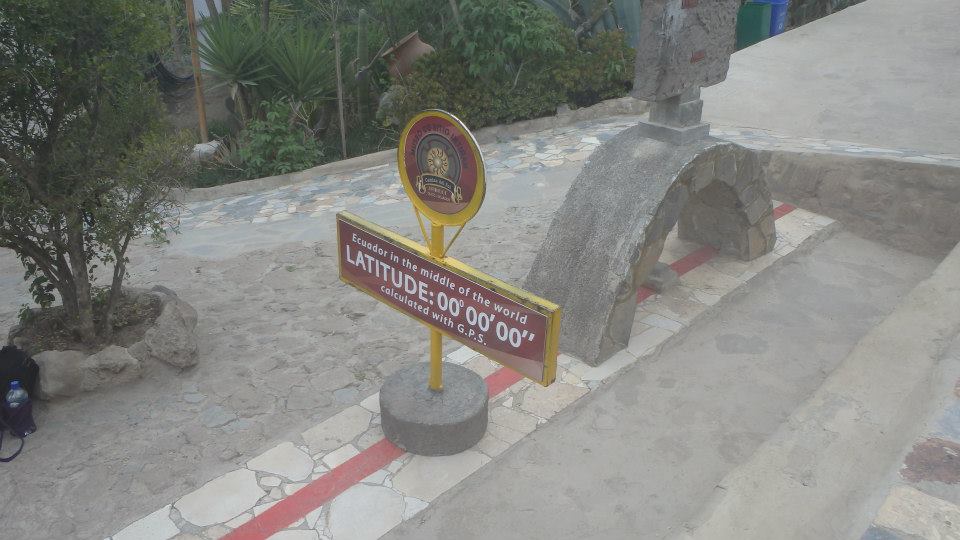 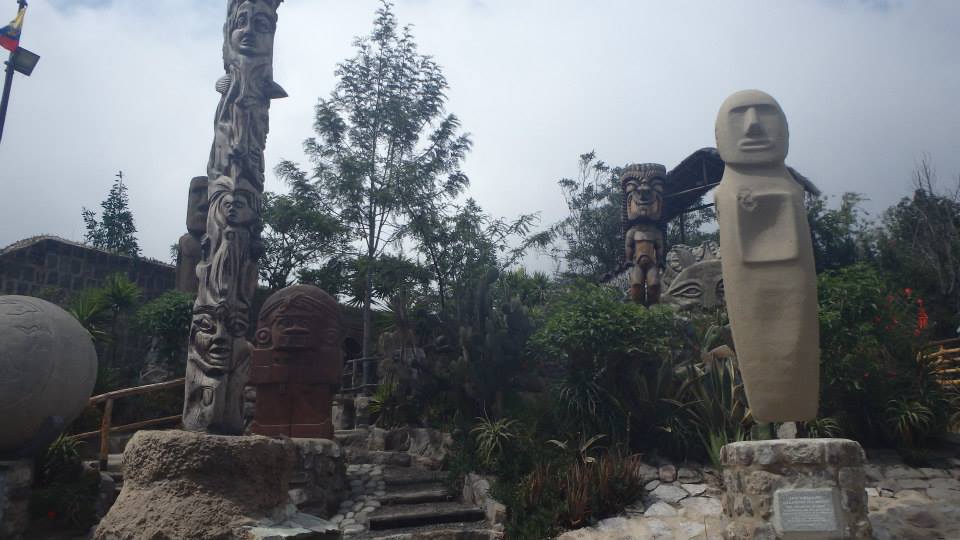 Top Things to do in Quito, Ecuador:

5 thoughts on “Visiting the Middle of the World – Quito, Ecuador”